I thought it would be awesome to showcase 100 different ways to earn an extra $1000, and highlight some of the great work of the Side Hustle Nation community.

Here’s my GoDaddy receipt from back then:

And then I sat on it.

In the meantime, other projects took priority — including other books! Sometimes it’s hard to predict which direction inspiration will take you. For example, I published:

Oh, and we had a couple kids along the way too! That’s how long $1K 100 Ways has been on the back burner.

But some ideas just won’t die. This was one of them.

The Easiest Book Ever!

Toward the end of last summer, I finally decided to rip off that band-aid and get started on this project. To say I was naively optimistic about how long it would take and how hard it would be would be the understatement of the year.

“I’ll have this buttoned up and ready to go for a November launch—no problems,” I thought.

On the surface, it seemed feasible. After all, my gameplan was to essentially crowdsource the whole “meat” of the book.

If I could get 100 members of the Side Hustle Nation community to submit their stories, there really wouldn’t be much actual writing required.

And that turned out to be partially true, but for several factors, it was still much harder than anticipated. Among those was not doing a great job of carving out time in my week to move it forward. I was still just working Tuesdays and Thursdays, and with my other projects and priorities and obligations, the book was often neglected.

The first stage of this project was collecting the stories. But even before that, I had to figure out what bits of information it made the most sense to collect, and how to collect them.

That second part was easier: I just used a Google Form. 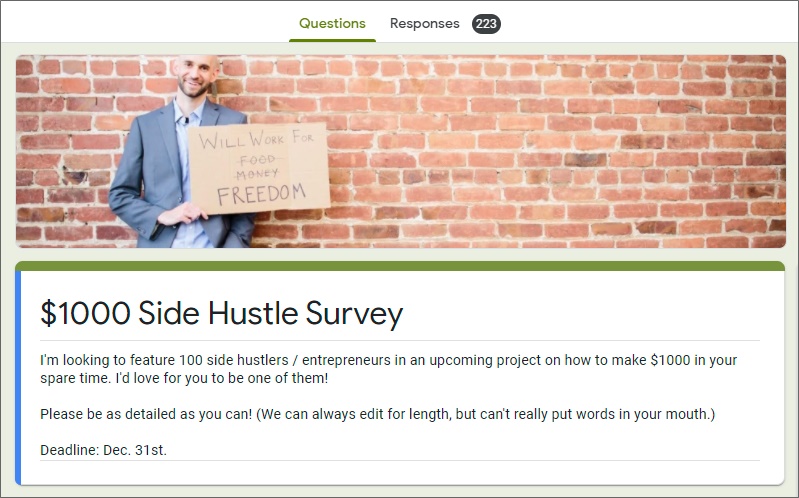 The first part required a little more thought though, because I wanted the stories to have somewhat of a parallel structure so readers could compare answers across examples.

In the end, here’s what I asked:

In many ways, those questions are similar to the arc of many Side Hustle Show episodes. And the final book, perhaps deceptively simple in appearance, is 100 people’s answers to those questions.

To begin collecting stories, I sent an email to the Side Hustle Nation newsletter list. The first of these “solicitations” went out at the end of August 2020.

My subject line: “Can I feature you, %FirstName%?”

I ended up getting well over 100 responses in the first few weeks, but I soon learned that not all responses were equally valuable.

For instance, some people gave me 1500 words to work with, while others maybe only had 150. It’s always possible to edit for length and brevity, but I couldn’t really put words in people’s mouths to expand their profile.

The next stage of the project was reviewing the stories I got back. I used a color-coded system in the form-results-generated Google Sheet, with green being good, yellow being a possibility, and red being a no-go.

So this marked the start of directly soliciting stories from friends and acquaintances, and also reaching out to some of the authors of some of the “yellow” responses to see if they’d be able to provide a little detail.

In hindsight, I probably should have included a checkbox on the form for the broad business model, but I didn’t, which meant I needed to categorize the submissions.

That way I could organize the ultimate book into different chapters of similar businesses so it didn’t feel completely random to a reader.

In the end, I ended up 4 sections with roughly 25 stories in each:

Phase 5: From Sheets to Docs

One of the more tedious tasks in this project was copying the text from Google Sheets into paragraph form in Google Docs. Doing it once is kind of a pain, but doing it 100 times will probably make you want to throw your laptop through the window.

I’m very grateful to have had some virtual assistant help for this process. Still, it took longer than anticipated.

Phase 6: Intro and Other Interior Text

By now I’ve got probably 70,000 words in a Google Doc, and I haven’t written a single one of them. That’s a huge book already.

(For the sake of comparison, Buy Buttons clocked in at around 45,000 words.)

But I need to come up with a brief intro to the book, some chapter descriptions, and some final thoughts and takeaways.

Before the project even started, I knew the story I wanted to lead with in the intro—about the time my coworker and I found a pretty realistic-looking $1000 bill in the tip jar at our restaurant. And of course it turned out to be fake—it had George W. Bush on it—but the thought of that extra $1000 gave us plenty to talk about and dream about the rest of the day.

I also knew I wanted to cover some of the alarming statistics about people’s lack of personal savings and the impact that an extra $1000 would mean to a lot of families.

We’re well into 2021 at this point—months past my overly-optimistic initially-planned launch timeline. Thankfully Jennifer Harshman agreed to be my extra set of eyes and clean up these hundreds of pages of user-generated content.

We wanted each story to maintain the author’s voice, but still present some level of consistency page-to-page in terms of formatting.

Because the text was so long, this wasn’t a particularly fast process either.

You know you’re getting close the finish line when you start thinking about cover design. I had a certain look in mind with big bold text that would take up most of the cover, so I mocked up a few variations in PowerPoint and solicited some votes from the Side Hustle Nation newsletter list.

I offered up 5 variations to choose from, and one with big bold text and a green background was the clear winner.

In a way, having only one green option in a sea of white probably skewed those results. I asked Bryn if she could take a crack at it, and with some help from Canva, we pitted these two designs against each other in the Side Hustle Nation Facebook group: 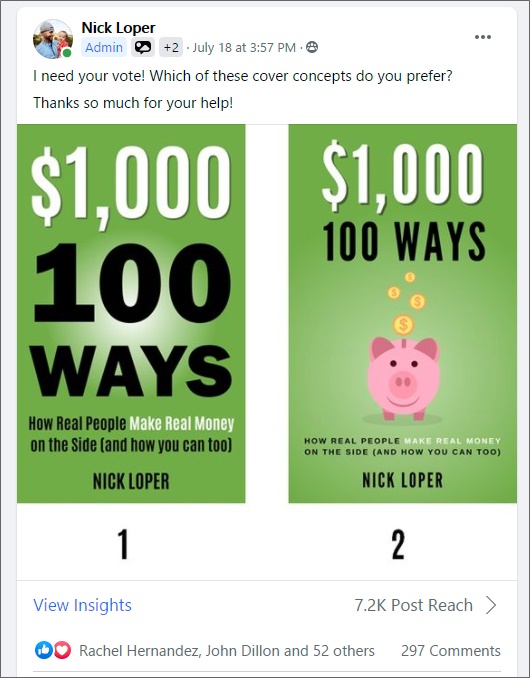 At the time I tallied up the results, the “piggy bank” version had around double the votes of the all-text version.

For whatever reason, I had a hard time getting the book to look right on both Kindle and paperback editions. Maybe I was just out of practice. Finally I figured out how to upload an epub file, generated by the free Calibre software, that would keep my embedded header font.

I’ve always said that paperback formatting is easier because it’s more “what you see is what you get,” but this time it wasn’t quite so. Each time I’d run a new version through the previewer tool, it would be off by a few pages from my Word doc.

Turns out, it’s “what you see is almost what you get” … but certain paragraphs would flow to the next line, and if you get enough of those over the course of 300 pages, things start to get messed up and all of a sudden the page numbers in your Table of Contents aren’t accurate anymore.

But eventually I was able to get that all sorted, although not before ordering a few dozen less-than-optimal copies for the entrepreneurs featured in the book.

I skipped a step earlier because I didn’t mention that I’d recruited around 50 “advance review copy” readers, primarily through the email list. At the end of one of my newsletters, in the P.S. section, I asked people to reply if they’d like a free copy of the book in exchange for a review.

It was a fun little way to reward people for reading all the way to the bottom.

But as soon as the first draft was finished, probably 3 weeks before the launch, I sent out PDF and .mobi files for Kindle to this group. A couple beta readers in particular were super helpful: Mark and Mah both responded and pointed out a couple typos that had evaded me thus far.

Last week I set the book on a quiet free promotion on Kindle and invited this same group to “order” it and drop in a verified review on Amazon.

I also messaged everyone featured in the book, let them know the Kindle edition was temporarily free on Amazon, and offered to send them a hard copy as a thank you for sharing their story. This was actually a ton of fun and ended up sending out around 50 copies to locations all around the world!

The result? 20 pre-launch reviews in the US Amazon store before the public launch.

And that brings us to today. The gameplan for the launch is to offer the Kindle version of book at $0.99 for the next few days, then raise to $2.99, and then possibly higher in subsequent weeks.

In addition to this post, I’ll have some broadcast emails set to go out, probably Tuesday, Thursday, and Saturday. I have some paid email promos scheduled with BookSends, and will apply for a BookBub promo at some point as well.

I’d like to try and set up some AMS ads for $1K 100 Ways, but my campaigns for The Side Hustle kept getting denied for “unsubstantiated marketing claims.” It was never clear what they were looking for … like all of these are real stories, how would you prefer I substantiate them? So I’ll be curious to find out of this title runs into a similar issue.

I’m not going on an extended podcast guesting tour or anything like that, I’m not trying to hit any national bestseller lists. I’m just trying to share some examples of what real people are doing to earn extra money, and hopefully inspire a domino-effect of action along the way.

We’ll see how the launch shapes up, but in ultimately the book is another asset out in the world that can help people and hopefully earn some author royalties as well.

We’re traveling the first part of August but I do plan on recording the audiobook version at some point this summer or early fall. Gotta warm up the vocal chords for that project!

Thanks so much for your support and go ahead and grab a copy on Amazon if you haven’t already!