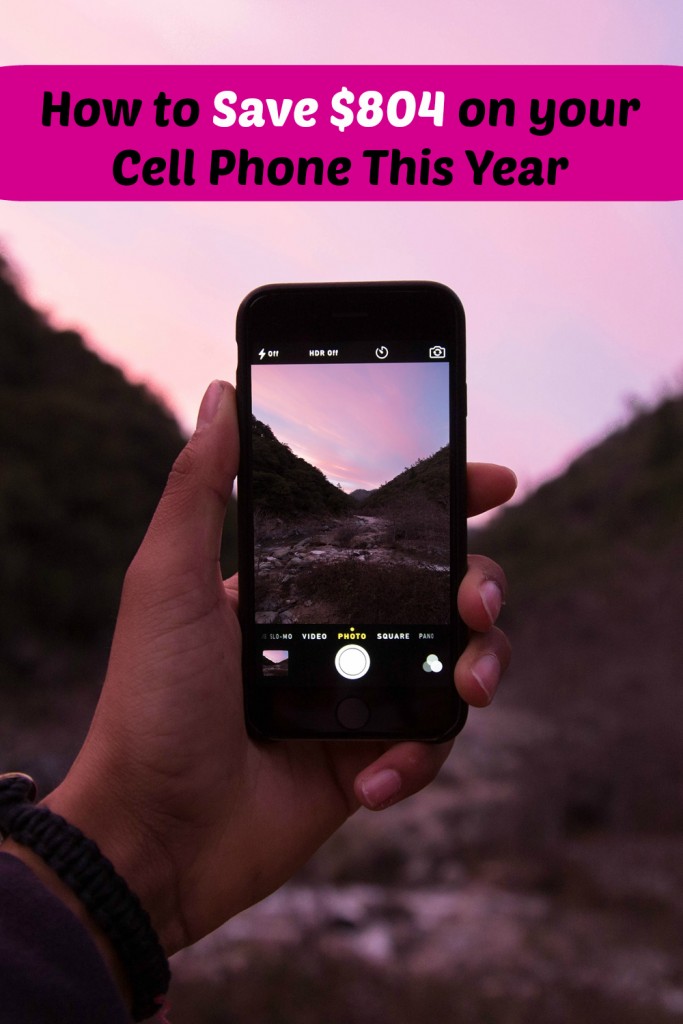 Earlier this year, Bryn and I switched cell phone providers from Verizon to Ting.

Our bill last month was $59 for 2 iPhones, less than half what we were paying at Verizon.

(Our average Verizon bill in 2013 was $126.26 — a number I knew because I’d just researched all our expenses to find our Rat Race Freedom Number.)

It’s OK, I’d never heard of them either.

Ting is a Mobile Virtual Network Operator (MVNO) that licenses and resells access to Sprint’s network.

Since our iPhone bill was one of larger monthly expenses, and our contract was up, I did some research on what other options were out there. We weren’t unhappy with Verizon’s service, just their price tag.

I found that there’s a whole world of alternative cell phone service providers beyond the “Big 4” of Verizon, AT&T, T-Mobile, and Sprint.

How Does Ting Work?

Ting service works with any approved Sprint device. They are unique among cell phone providers in that your monthly bill is based on how much you use the service. Novel concept, right?

According to their website, 98% of customers would save money switching to Ting, and the average monthly bill is just $21 per device.

There’s a base charge of $6 per device per month, and after that the billing is based on the minutes you talk, the texts you send, and the data you use. The pricing tiers are grouped into “buckets” so even the heaviest users are still likely to save money.

*Ting actually just lowered their data rates — we would be projected to save another $5 per month going forward based on last month’s usage.

It’s not “unlimited,” but then again, we weren’t really taking advantage of Verizon’s “unlimited-ness.”

Ting won our business for their super-competitive pricing and unique billing angle, along with their support for our beloved iPhones :)

The other providers I considered were:

Both run on the Sprint network as well, so it essentially came down to how the service was packaged and sold.

Virgin has a well-known brand name, and would have been a cost savings over Verizon, but their pricing was a little higher than Ting based on our usage.

They are running a special for iPhone users for $5 off per month, but based on the minutes we use, it would have been $40 per line, or $80 in total.

One advantage of Virgin that Ting doesn’t have yet is support for the iPhone 5. But that would have necessitated buying 2 new $500+ phones and pretty much wiping out any potential savings.

Republic is best known for their $5/month smartphone plan.

The catch? You can only use it while on WiFi.

Not so handy for when you’re out and about and need to make a call or look something up.

But the rates are still very attractive for their other plans:

Why didn’t we go with Republic?

They currently offer only one phone: the Moto X.

By all accounts, it’s a great phone, though we would have had to buy 2 of those for $299 apiece.

Ultimately we decided since we’d been so happy with our iPhones, we wanted to stick with a service that could use iPhones.

Making the Switch to Ting

If you’re thinking of making the switch, here’s how it went down for us.

One major downside of Verizon is that many of their phones won’t work on other networks because they use a different technology. So our first order of business was to get compatible Sprint devices.

The search was easy to narrow down, because resellers will always put the carrier in the title of their listing and note whether or not the phone has a “clean ESN.”

The other consideration for us was to make sure the iPhones we were buying had either model number  A1349 or A1387 on the back. Per Ting support, those are the iPhone models that were supported.

I bought one from a friend (actually Kai from Episode 4 of The Side Hustle Show) for $150, and another off eBay for $170.

These were used phones with minor cosmetic damage, but otherwise perfectly functional.

Activating the Ting service was surprisingly easy. I just followed the prompts on the computer and on the phone and within a couple hours, it was all active and ready to go.

The best thing about staying with iPhones? The whole thing was restored from an iCloud backup — pictures, contacts, apps, layout, everything.

With a couple clicks, it was just like my old phone, only with new hardware. It was awesome!

Although our contract was up with Verizon, Ting has a special offer to encourage people to switch, where they’ll actually pay up to $75 of your early termination fee.

It may not cover the whole thing, depending on when you signed up for your current provider, but it will certainly ease the pain and you can pencil out the “return on investment” of the fee weighed against the cheaper monthly service. 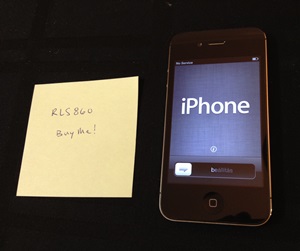 Our $320 cost to switch (for the “new-to-us” phones) isn’t our true outlay because we did sell our old Verizon iPhone 4s. (That’s more than one iPhone 4, not an iPhone 4S.)

I asked my virtual assistant service how much the phones were worth, and I was surprised when they came back with two very different numbers.

The first estimate was from Gazelle.com, a company that buys and resells used phones. They were willing to pay $40 each for our phones, which actually didn’t seem horribly out of line for 3-year-old smartphones — until I saw the 2nd estimate.

The next estimate came from Swappa.com, a marketplace for used phones. According to Swappa, the phones were worth way more — as much as $140 each!

That definitely seemed a little high, but hey if that’s the price on the open market, I was all for it. One cool thing about Swappa (as opposed to eBay) is that they have a pretty solid verification process to reduce the risk from the buyer’s side. I had to verify the phones’ ESN numbers to ensure they were “clean” and upload a picture with a handwritten note of the Swappa listing number.

I created the listings for our 2 devices and sold them quickly without issue, one for $145 and one for $130.

So for those of you scoring at home, that’s a $77 total investment for 2 new phones and a new carrier.

Related: How to Flip Phones for a Profit 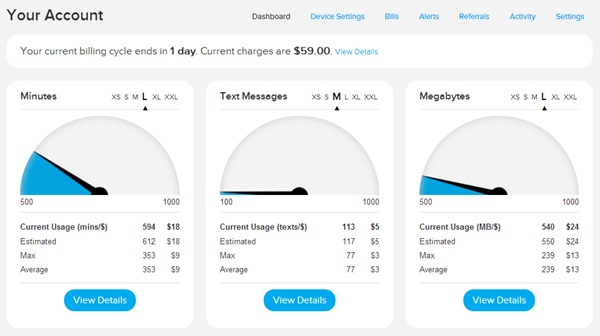 Yeah, But What About Ting’s Service?

The service is undeniably worse than Verizon. There’s no debating that fact.

But for half the price, the service is definitely more than half as good!

The 3G seems slower, we’ve dropped a few calls, and some text messages have been delayed. One person asked if I got their voicemail. Nope.

Is it frustrating? At times.

Yet life goes on.

(Sometimes I have to remind myself that we as a species survived millennia before the advent of smartphones.)

Aside from the tremendous cost savings, I’m excited about a couple other benefits of our new cell phone plan.

Not Being “On My Phone” As Much

One unexpected benefit of switching to Ting is I’m spending less time checking my phone while I’m away from WiFi. The risk of bumping up to the next “bucket” of data usage isn’t that scary a disincentive (I mean, we’re only talking about $9-10/month), but there’s something about knowing my usage correlates to dollars that’s changed my habits.

Did I really need to check my email at the gym, in the grocery store checkout line, or while hanging out with friends? Of course not. But I did.

It’s better this way. I’m generally not in a position to reply while I’m away from my desk anyway, and rarely do I receive a message that’s so urgent it can’t wait.

(I’m also taking many of my phone meetings on Google Voice these days too, limiting my cell phone minutes. If I’m sitting in front of the computer anyway, might as well use it, right?)

Another awesome thing about our new phones is that they have SIM-card support where our old Verizon phones did not. That means if/when we’re traveling overseas, we can pop in an inexpensive local SIM and have data and phone access — instead of paying crazy-inflated roaming rates.

We waited almost a year after our contract was up to make the leap. During that time we were still paying Verizon a rate that included inflated margins since they subsidized our original phone purchase.

The true price of the phone was baked into the service fees over the length of the two-year contract. If you stick around the same carrier with the same service and the same device, you’re essentially buying that phone over and over again.

For us, it was tough to overcome the inertia of not making a switch, which is exactly what the carriers bank on. How much could you save if you acted today instead of waiting?

I’m happy with Ting, but do your homework — they’re certainly not the only game in town.

5 thoughts on “Ting Review: How to Save $804 Per Year on Your Cell Phone Bill”