In 2006, I stumbled upon an amazing little side hustle.

(Quick primer: if you’re searching in Google for “blue widgets”, the exact match domain would be bluewidgets.com. Up until late 2012, these domains held an unnatural advantage in the search results.)

That authority would translate into clicks and sales and profits, I thought.

And I was right.

At the time, New Balance had just released the model 992, a popular, high-priced running shoe that was the flagship of their lineup.

Amazingly, the domain NewBalance992.com was available, so I registered it without a second thought.

Why had no one else thought of this?

I quickly put together a website to promote the shoes. Looking back, it would be a disservice to even call it a website, since it was only 1 page.

I had yet to discover WordPress, so I built this myself using the Yahoo SiteBuilder software. Thanks to the Wayback Machine, you can get a picture of my web design skills (or lack of them): 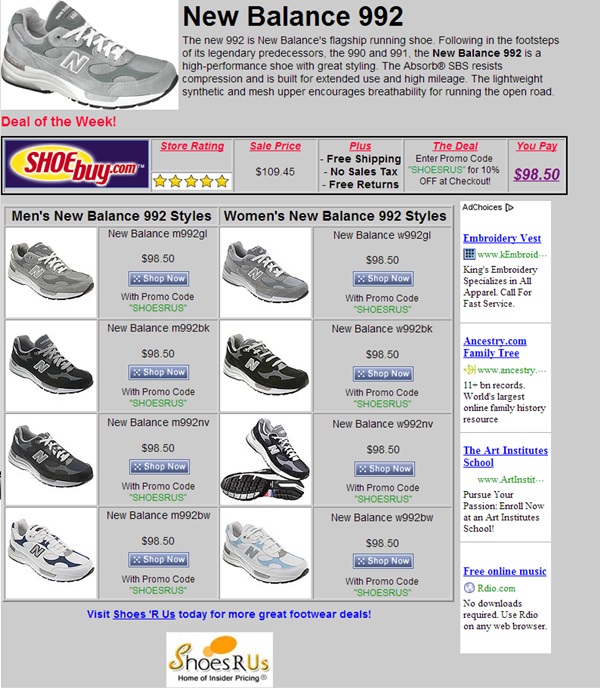 That’s it. That was the entire site. When the price changed I’d have to update it manually and re-publish the site.

What it lacked in substance it made up for in value — it delivered exactly what searchers were looking for: the best deal on the red hot New Balance 992 running shoes.

I pumped AdWords traffic to this page as hard as I could. I made $15-20 on every order; several thousand dollars worth in the first few months after launching the site.

Things were going so well in fact, I registered NewBalance993.com, so I could play the same game whenever they introduced the next model!

Come to think of it, this might have been my best side hustle ever. It had a negligible start-up cost, took almost no time to build, manage and maintain, and was consistently profitable from the first days.

I was happy, customers were happy, Shoebuy was happy. It was a win-win-win situation.

But as you might have guessed, New Balance was not happy.

(Their lawyers told me so.)

“Cease and desist,” the letter said, followed by some scary legal-ese. According to them, my little one-page site constituted “trademark infringement.” It was “confusing” customers and “damaging [their] brand.”

At the time, I didn’t really see what the big deal was. I was selling their products, after all — not trashing their reputation or sending people to Nike.

I reasoned I bought the domain fair and square, but could be persuaded to sell it to a deep-pocketed corporate giant, for the right price of course.

But whatever visions I had of a big domain-sale payday were fleeting. After about 10 minutes of research it became pretty clear they were 100% in the right and I was in the wrong.

Here I was, thinking I was providing shoe-shoppers with a valuable service (truth is I was), when it was actually illegal the whole time.

Using another company’s trademark in a domain name was a no-no.

So rather than face the wrath of the 100-year old company’s legal team, I folded. I shut down the site and all the advertising to it.

While it was painful to lose such an easy cash cow of a side hustle, my brush with the law taught me an important lesson about doing business online.

The lesson was to build your own brand.

Real businesses have their own brands and if you’re serious about your side hustle, you’ll have one too.

It’s a longer, harder road for sure, but it’s the only way that works long-term. Sure, you may be able to game a few bucks off somebody else’s brand name for a few months, but then what? My New Balance 992 site lasted 6 months.

That kind of “piggybacking” isn’t sustainable. Look at the most successful and innovative affiliate businesses; all have built their own standalone brands.

Beyond that, there’s the matters of pride, integrity, and legacy. Did I really want to be the guy squatting on exact-match trademark domains for popular shoes?

What do you think? Ever been served with a “cease and desist” notice for your work online or off? Any funny side hustle brand-building missteps you care to share?