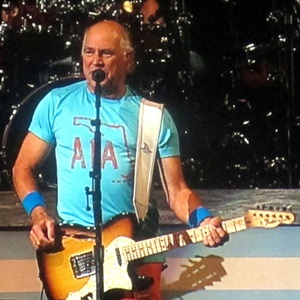 Behind the party-hard imagery and island escapism, there are some good nuggets of wisdom in the lyrics of Jimmy Buffett.

If we couldn’t laugh we would go insane.

If we weren’t all crazy we would go insane.

All I want’s the quiet and the comforts / that livin’ with my lovely lady brings.

Read dozens of books about heroes and crooks / and I learned much from both of their styles.

(On Americans on vacation) Tryin’ to cram lost years into 5 or 6 days / Seems that blind ambition erased their intuition / Plowin’ straight ahead, come what may.

I don’t want to swim in a roped-off sea … I’ve got to be where the wind and the water are free.

Spinning around around in circles / Living it day to day / And still 24 hours maybe 60 good years / It’s really not that long a stay.

Turn of the TV / Turn off the crap.

Spend it while you can … you can’t take it with you when you go.

Everybody’s got something to sell.

Make the best of it’s ’bout all you can do.

Wrinkles only go where the smiles have been.

I’m growing older but not up.

Women always know before you tell them.

I don’t want other people thinking for me.

There’s a little bit of fruitcake left in everyone of us.

Religion is in the hands of some crazy-ass people.

I got too much stuff.

With a little love and luck you will get by.

Live a lie and you will live to regret it.

7 thoughts on “Parrothead Wisdom: 27 Life Lessons from the Lyrics of Jimmy Buffett”