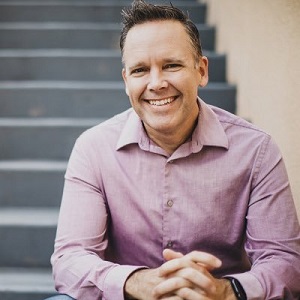 Josh runs a kind of modern PR service for small businesses and has developed a unique and innovative way to break through the marketing clutter and have real conversations with real prospects — and do it at scale.

He’s found a way to create what he calls “a speed dating environment.” That’s his metaphor for the revolving door of new prospects he’s interviewing and selling his services to.

To do this, Josh has created a podcast called The Thoughtful Entrepreneur. It serves as a platform for business owners to talk about their businesses, and for Josh to demonstrate to them how he can improve their visibility.

It’s a win-win, and with streamlined processes in place, Josh is seeing a return of around $4,000 for every $200 he spends on producing his show.

If you’re a current or aspiring freelancer, consultant, coach, or agency owner… this is gold.

Tune in to hear how Josh does his proactive prospecting, how he’s turning his content creation into sales conversions, and the foundational ground game he’s got set up that makes this all work.

How Are You Finding Your Prospects?

Josh opened up by telling me there are two things you need to find your target customers:

There are two platforms Josh uses to find prospects, these are:

The main tool of choice for Josh is LinkedIn Sales Navigator. It’s an advanced sales tool that makes it easier to narrow down who you’re reaching out to on LinkedIn. It’s been called a “Social selling” platform and is designed to be used exactly how Josh and his team are using it.

“You can be very specific about who you want to talk to, and can start getting into their inboxes,” Josh told me.

The main criteria Josh narrows down when searching for prospects are:

Companies with 5-20 employees is the sweet spot for Josh.

What Are You Offering These Businesses You’re Reaching out To?

Business owners typically get a lot of cold outreach landing in their inboxes. It’s how you approach a prospect that’s going to make the difference between having your mail sent to the bin, or getting a reply.

Josh has an interesting philosophy about outreach. “The thing that you offer should match the psychographic profile of the thing you ultimately want to sell,” he told me.

Josh’s business is making introductions between media influencers and clients. He’s looking for growth-minded business owners, people who want to share their stories, and prospects that crave more significance in what they do.

So, he started a podcast called The Thoughtful Entrepreneur for the purpose of inviting his ideal prospects on to talk about their businesses and share their stories. It’s an interview, but it’s also in many ways an exploratory sales call.

As for how he’s reaching out to prospects, Josh sends them a message asking if they’re interested in coming on the podcast. After a back and forth and hearing a “yes” from them, he sends them this link to schedule a time to record.

As Josh mentioned earlier, LinkedIn is a gold mine of prospective leads for him. He’s releasing an episode every day and still has a backlog of 8-10 weeks’ worth of shows.

How Are You Recording and Marketing These Podcast Episodes?

Although it’s a podcast, Josh records his episodes in Zoom so he and his guest can see each other. He pointed out there are a couple of reasons for this:

As for the format and production of the show, Josh has this pretty well systematized. He spends the first 5-10 minutes figuring out what he’s going to ask his guest, then asks pointed value-driven questions specific to them and their business.

He tries to wrap up the show in 30 minutes.

A member of his team picks up the file, then uses a tool called Auphonic to add his intro and outro. They upload the file to Libsyn, a service that then uploads the file to a number of podcasts and audio feeds.

Finally, Josh uses Otter.ai to generate a transcript he uses for his show notes and blog post.

What the Return on Investment for Producing the Podcast?

The podcast is Josh’s marketing investment, so this can be deducted from the average value of a customer to get a ballpark figure on the ROI. Josh said the numbers shake out like this:

The only issue Josh faces is producing enough episodes. He even joked about releasing an hourly show to meet the demand he’s facing.

How Are You Following up After the Call?

I asked Josh how he’s turning these interviews into paying customers.

“After the interview,” he said, “I’ll ask them, are you interested in getting more visibility?”

But the numbers dwindle during follow-ups and them actually committing to produce or service. Although, improving on his follow up conversion rate is something he knows he can improve on.

When someone says they’re interested, Josh gives them a link to a video that walks them through how his company can help them and leave it with them for a few days. If he hasn’t heard from them, he then sends a follow-up email.

A tip Josh shared, and one he says he’s found to be exceptionally more effective than regular emails is to send a short video email.

He records these using BombBomb, and can record 25 or so personalized video messages in 60-90 minutes. One of his assistants then pick up the videos, add some text to the mail, and sends them out on his behalf.

Can You See Anyone Else Taking over Hosting the Show?

With the bottleneck in the business being Josh’s time recording the shows, he’s thinking about bringing someone else on to record shows too.

He said it’s not vital that he’s the only host, so it’s something he’s going to consider as a way to scale up his revenue in 2020.

What Are Your Goals for the Business?

“Definitely 7-figures a month or more,” Josh told me. “That’s our objective.”

Josh is passionate about his business, not just from a business owner standpoint, but he feels a genuine responsibility to help small business owners get the exposure they deserve.

He said it’s the “Why” behind what he does that motivates him more than the money. But the “Why” drives him to keep growing his business, which in turn grows his revenue. He’s done 6-figure months, so maybe a 7-figure month isn’t too far in the future.

Ever Had Feedback That This Process Was a Sneaky Sales Tactic?

Josh said “No” he’s never had a guest come back and say they saw this process as just another way to get them on a sales call. The thought of this happening does concern Josh though, so he says he’s very low key about his products and services while they’re on the call.

He also said he promotes every guest equally, regardless if there is a chance of doing business after the call. Getting prospects on his show is a way to introduce his business, but he also says he has an audience to serve and takes that responsibility very seriously.

If you’re interested to find out your authority score in your industry you can take Josh’s authority quiz at UpMyInfluence/quiz.

Josh’s #1 tip for Side Hustle Nation