For the past month I’ve been doing a little experiment.  Each day I would do a set of push-ups until I couldn’t do any more.  Push-ups to failure, I called it.

Exciting stuff.  Here’s how it went down: 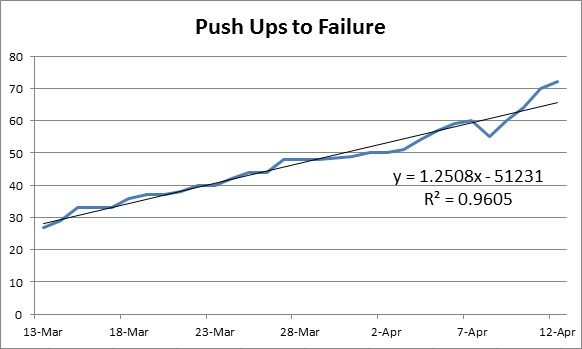 Nerd Bonus: You can see from the trendline with an R-squared value of .96, the improvements were very consistent.  The average gain was 1.25 push ups a day.

I forgot to do my push ups on 2 days (the flat section near the middle of the graph) on account of snowboarding and skiing those days.

Are these perfect push ups? Not at all. But I was consistent in my methods.  You know, for science.

I found that doing them faster yielded better results as there seemed to be a physical limit of both repetitions but also time under resistance.

Each day I tried to meet or beat yesterday’s total, and only failed to do that one time.

Should I keep going and try to get to 100?  If the formula holds true, it should only take another 3 weeks.

I think this experiment is a great example of how focusing on tiny incremental improvements can produce dramatic results.  A month ago the idea of doing 70 push ups would have sounded crazy, but by specifically NOT aiming for it, and instead just trying to beat yesterday’s total, I was able to get there.

This kind of incrementalism is the opposite of the BHAG (big hairy audacious goal) theory from Built to Last.  I think both can work, but in the end even the most outrageous goals have to be broken down into smaller steps.

Now to put this tactic to work in other areas of life, business, and my goal of earning $1000 a month in passive income by the end of the year.

14 thoughts on “Push-Ups to Failure”