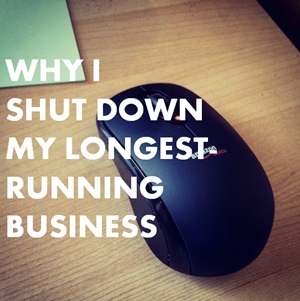 This summer I pulled the plug on ShoeSniper, my original side hustle and my longest running and most successful business.

A moment of silence.

It wasn’t an easy decision, but I was confident it was time to move on. I think this is an important story to share because most of what you read in the entrepreneurship world is about perseverance and “never giving up.”

There are dozens of wise quotes about entrepreneurial tenacity, such as “Quitters never win and winners never quit.”

And all that rah rah stuff is great, but it’s not true. For many habits, experiments, and businesses there comes a time to quit; to give up; to throw in the towel.

And after almost 10 years, the sand ran out on ShoeSniper.

I’d been selling shoes as an affiliate in one form or another since 2004; as far as businesses go, it had a good run. In total, I helped sell well over $10 million worth of shoes for my advertising partners and helped thousands of customers find the best deal on footwear.

It was my original side hustle; my first real introduction to online marketing and making money on my own.

I owe a lot to the shoe business; it opened my eyes to the possibilities of entrepreneurship and was the vehicle that let me quit my job in 2008.

The site was a niche-specific comparison shopping engine – like a Pricegrabber or a NexTag but specifically for footwear. By focusing on one product vertical, my theory was I could:

But the business was dying a slow painful death and I couldn’t revive it.

A combination of factors killed ShoeSniper.

First, the site was heavily reliant on paid search traffic and as you might imagine, the AdWords game has changed considerably since 2004-2005. For instance, over time:

As a result, it became harder to and harder to generate profitable traffic. Since the site only earned $5-15 per sale, it was very much a volume-based business.

If the average order was worth a $15 commission, I’d have $15,000 in revenue – or $5k in gross profit after advertising expenses.

Fast forward to this year and it was a struggle to even spend that $10,000 on Google. I had the budget, and the searchers were definitely out there, but the keywords had either become too expensive for my ads to show or were dominated by image ads. If they’d show my ads at $0.50 a click, I’d have 20,000 visitors.

But because of discounting restrictions, now the traffic only converts at 3%, leaving me with 600 orders. With the reduced commission rates, maybe the average order value is only $12. That means I’m only generating revenue of $7200 from my $10k in ad spend.

On top of that, I still had to pay for hosting and maintenance, and my VA to help run the site.

It was a losing proposition, and I wasn’t sure what to do about it. We tried to optimize the site and focus on the most profitable brands and keywords, but as a volume-based operation, I could only cut so far.

The Business Faced Tough Times Before – what was different?

In 2008, Google banned the site from advertising with them, saying it was “poor quality” and it’s sole purpose of existing was to send visitors to other sites. As an added bonus, this happened the day AFTER I quit my job.

Never mind the thousands of happy customers and the ironic fact that Google’s search engine’s sole purpose of existing was to send visitors to other sites!

After 3 incredibly stressful months and some site improvements, they finally admitted they made “an error” in their evaluation of the site, and reinstated my account.

In 2010, the site suffered from growing pains and had to be rebuilt from the ground up. To make matters worse, I was pissed off with the original development team and spent more than $10k on other useless contractors who couldn’t get the job done.

In 2011, California passed legislation that forced many retailers to terminate their relationships with California-based affiliates. Rather than lose my livelihood, I rented a studio apartment across the stateline in Nevada so I could stay in business.

(Two months later, they repealed the law and now have a loophole where out-of-state retailers can safely work with affiliates here.)

In each case, I did what I had to do to keep the business running.

But in 2014, the site was barely breaking even and actually losing money some months, especially after paying for hosting and my VA.

I wanted to make one last-ditch effort to salvage the site. My idea was essentially to 80/20 the shit out of it. Of the 500,000 products, only a handful of brands ever made any sales. Of the 40+ stores, the top 15 accounted for more than 98% of revenue.

In other words, we were churning through a TON of data on a daily basis, eating up a ton of processing power and bandwidth on products that were not adding to the bottom line. By re-working our entire data-processing system, which was a mish-mash of systems built over the course of nearly 10 years, maybe a leaner, meaner ShoeSniper could emerge.

Maybe I could piece together a few profitable months and set the site up for a sale.

After 7 months of trying, my tech team failed to deliver a working version of the site to even test that idea. We’d agreed on a small contract at the onset, but I’d said all along I wasn’t comfortable spending more money on development for what I saw as a sinking ship.

When they came asking for additional investment to fund their ongoing efforts, I couldn’t stomach dumping any more money into the project. (Actually, they surprised me with an invoice for their fruitless efforts to that point, and an expensive add-on to continue working.)

Um, no, that’s not what we agreed on.

I told them the definition of insanity is doing the same thing and expecting different results; and handed over the keys to the site in exchange for them waiving the “amount due.” What they plan on doing with it, I have no idea.

I suspect they want to maintain it as a portfolio piece to attract new clients because it really is a complex site; and more consumer-facing than most of their other work.

Maybe someone else would have made a savvier exit, but I was sitting on a non-functional, unprofitable, money-sucking asset I was happy to be rid of. In fact, it was like a huge weight had been lifted off my shoulders.

The site was responsible for a disproportionate amount of stress in my life over the last year, and with all the problems, it just plain wasn’t fun to work on anymore.

Sure, I was sad to see it end this way after so many years, but I learned so many priceless lessons in running the business it was a fair exit in my mind.

Why Not Invest in SEO or Other Traffic Sources?

SEO for comparison shopping sites is difficult, especially given Google Shopping’s entry into the game. There’s not much unique content on any of the pages, and it can be tough to build links for product pages that are constantly going in and out of stock.

Still, not making an investment in SEO when times were good is a big regret. Maybe if I’d diverted some of the profits from the paid traffic into building an organic presence, I would have been able to keep the business alive.

I contemplated a couple “pivots” for the ShoeSniper, including licensing the technology or shifting to a more business-to-business model, where I could provide competitive pricing intelligence for the footwear retailers.

The only problem was our technology didn’t work. It was unstable and constantly had errors with wide swaths of the database getting deleted without warning. It definitely wasn’t ready to be re-packaged and sold to a peer consumer, and would have required a big additional investment to get it there.

On the competitive pricing intelligence, I made a couple calls to find out how stores were currently solving this need. It turns out, they weren’t. Their internal teams set the prices or they were algorithmically based on sales rates and inventory levels.

So rather than invest more money into building a product there didn’t seem to be much demand for, I tabled that idea as well.

Websites are typically sold on a multiple of current monthly profit, anywhere from 12-36 months, depending on the business’ history and other factors. With Empire Flippers, sellers can earn 20x monthly earnings in a sale.

I would have loved to sell, but the problem is 20x zero is still zero, and that’s what the project had been earning for much of the year.

I’d hoped to build it back up, if I could have got it to even just $1000 a month, that could have been a nice exit. But after months and months of trying to fix the technical problems, we weren’t getting any closer to a working solution and my heart just wasn’t in it.

I often get the question, “When do you know it’s time to give up and try something else?” And it’s difficult to answer, but in this case, I just felt it.

During previous challenging times, I HAD to make it work; it was my only income source. I was tied to it just like I could have been tied to a job.

This time, I was sufficiently diversified that it was OK to let it go. It still stings, and was an emotional loss to walk away from my longest running business, but I’ve got enough other projects going on to pay the bills and keep me busy.

And the good news is, they’re more fun to work on too :)

I’m still working on the 8 income streams I outlined here, plus aiming to build new ones in 2015. My hope is with the extra hours freed up every month I’ll be able to channel that energy into some exciting new side hustles.

Have you ever had to shut down a business? Did you have any regrets? Or did it lead to bigger and better things?

26 thoughts on “Killing My Baby: Why I Shut Down My Longest-Running Business”