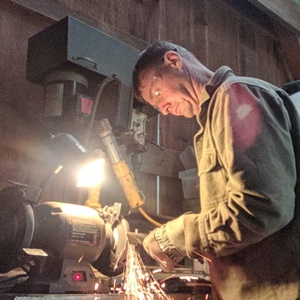 Every house in the country is a potential repeat customer…

Matt Rowell set himself the goal of generating an extra $5k over 5 years to fund some passion projects, and he’s well on his way.

Matt runs AmericanEdgeSharpening.com on the side from his day job as captain of a research vessel. It’s a knife sharpening business, which makes $250-500 a month when we spoke and is earning him $30-60 per hour.

2020 UPDATE: Matt sent me a note that he made $1700 sharpening last month — and actually had to turn some customers away!

He saw an ad while posted abroad with the Navy that gave him the idea for his business.

And then he took action. Matt:

The best thing about the knife sharpening business?

“If you drive down the road, every house that you pass has a bunch of knives in it,” Matt said. That means an almost limitless number of potential customers.

Tune in to hear how Matt got started with this idea while he was deployed in Djibouti, Africa, including his equipment, how he learned how to do it, and how he’s marketed and priced his service.

NOTE: My first interview with Matt aired in November 2018. For the 2020 update, please see “Where Are They Now?” below.

Why Start a Knife Sharpening Business?

Matt was recalled to active duty for the Navy and was deployed to Djibouti for a year. He was working a desk job, and being the hands-on type of person, he wanted something more to do with his hands while he was out there.

He saw an ad in a local listing, similar to a Craigslist, for a knife sharpening service. He reached out to the ad poster to get some more information, but he had already been sent home.

So, Matt found out as much as he could about knife sharpening, purchased the gear he needed, and started watching YouTube instructional videos. Then he started offering to sharpen knives for free to get some practice.

He got some paid work from referrals while in Djibouti, but it was once he got back home that he decided to turn his new skill into a true side hustle.

What Equipment Do You Need to Sharpen Knives Professionally?

Matt started out with an Edge Pro Apex sharpening system and says he’s found it to be a really versatile and reliable sharpening kit.

It will set you back around $255 for the basic kit, and Matt has added some other attachments to enable him to sharpen a wider range of blades.

Matt said, “If you drive down the road, every house that you pass has a bunch of knives in it.” There is no shortage of potential customers!

He started out asking friends and family members if they needed any knives sharpened or knew of anybody who did.

He then put up a Facebook page, which started bringing in a few new customers too.

Matt said his business started steadily growing without spending any money on marketing or advertising this way.

He later built a drop box on his driveway and put a sign on the side of the road which he says is now his number one marketing tool. (He lives in a small town in New Hampshire.)

Matt also set up a booth at the local farmer’s market for a cost of $25 a season.

“Building the community has become the biggest unexpected blessing in starting this side hustle for me,” Matt said.

Matt did a Google search for “Sharpening around me” to see how much competitors were charging and to get a ballpark figure for how much he should charge.

The first thing he did was simplify the pricing compared to what he was seeing.

A lot of competitors broke down pricing per types of knives, so Matt settled on a flat $1 per inch of blade with a minimum of $5 per knife.

This structure worked out to earn him between $30-60, with an average customer spending $20 per order.

Matt doesn’t just sharpen knives for private individuals, he also has a business client base.

Business to business relationships are more likely to be recurring and have a higher value too. “I treat every client as recurring,” Matt said.

He keeps in touch with them, and sends out newsletters with knife tips and special offers.

Here is a list of some of the businesses Matt has worked with:

Matt has a recurring contract with a sheep shearer and trades haircuts with a salon for keeping their shears sharp.

Handling the Knife Dropoff and Pickup

When Matt started out, people would knock on his door to drop off their knives, but this was causing a lot of disruptions.

So, he designed a drop box at the end of his driveway. There are two boxes, one to leave knives in to be sharpened, and one for the finished knives to be left for collection along with payment.

The boxes have cipher locks, so the customer can open it them securely lock their knives in, and Matt can give them the code to open the box and take their finished knives.

Since I last spoke with Matt in late 2018, he’s more than tripped his knife sharpening side hustle – he’s now bringing in a consistent $1500 a month!

What Do You Attribute the Jump in Revenue To?

“If I could attribute the jump to one thing, it would be my dedication to Q1 of 2019 to really focus on marketing,” Matt told me.

Matt decided to break up the first quarter of the year and focus on different marketing channels each month.

He spent a month on each of the following areas:

Of these three, Matt said he saw the most success with Google My Business and started putting more time and effort in that area.

He dedicated 20% of his revenue to Google Ads, which was around $100 at the time, and really dove in to make the most of leveraging Google traffic for marketing.

Matt said, for anyone looking to also use Google My Business to market their business, he has two takeaways:

How Are You Using Google My Business to Find New Business?

People are much more likely to use Google for keywords like “Knife sharpening near me”, which is wanted he wanted to appear for. So, he knew he had to focus his efforts there.

Matt started targeting relevant keywords, like “Knife sharpening near me”, and quickly saw a rise in new customers.

He also attributes his growth to seeking out reviews from customers, and replying to each one. Matt said this helped build his social credibility, which also helped to drive more customers to his page.

What Matt’s doing is clearly working – at the time of writing this he had 104 reviews, and 103 of those were 5-stars!

“The systems I have in place are well suited to the current scenario,” Matt told me.

Matt explained in our first call how he had set up drop-off boxes at the end of his driveway. This allows customers to drop off and pick up their knives without any direct contact with him, which worked out perfectly during the pandemic.

He did shut up shop briefly when the pandemic first hit. This was due to the uncertainty around the situation. During which time Matt kept a list of anyone who reached out to him, and messaged them when he reopened.

When Matt did open back up for business, he noticed an uptick in volume and an increase in tips. Matt also expanded his business to sharpen gardening tools, which helped as more people were using gardening tools during the lockdown.

Anything New on the B2B Side?

Matt received a business grant a while back to invest in the equipment to sharpen hair shears and clippers blades.

This has helped him break into the pet grooming market. So much so, in fact, that he’s currently having more business coming his way than he is able to take on.

Matt’s knife sharpening business is still a side hustle so he’s limited for time. He currently spends around an hour a day sharpening blades.

“For the foreseeable future, I still don’t desire to take this to a full-time thing,” Matt told me.

He is exploring the idea of hiring help so he can take on more work. Matt said he’s also had a number of people reach out to him to help them start his own knife sharpening business.

This prompted Matt to set up an online community for people looking to start their own knife sharpening business. He did this using software called Mighty Networks.

You can find his guild at GuildofSharpeners.org, and this is Matt’s passion project going forward. He’s building a community, has a paid course available, and enjoys communicating with his members and helping people out starting their own businesses.

Matt also goes live on YouTube every Thursday for “The Thursday Night Grind” where he sharpens whatever he has on his bench live for an audience. You can check out his YouTube Channel here if you’re interested in dropping in.

“Don’t quit in the dip, keep going,“ Matt told me. 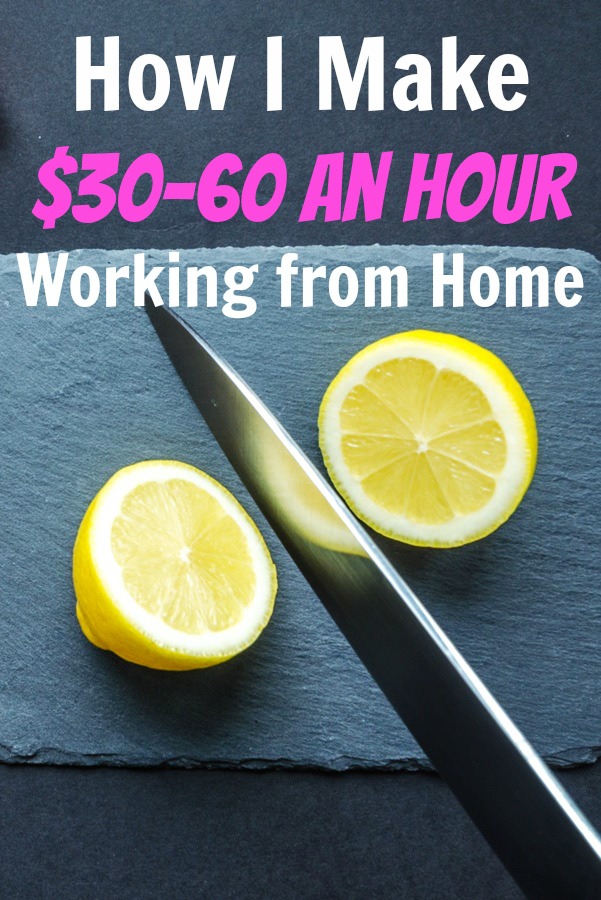 7 thoughts on “How to Start a Knife Sharpening Business: Earn $30-60 an Hour From Home”