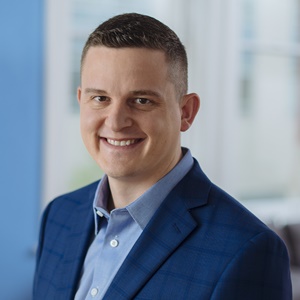 How did a butcher shop’s side project turn into “the best snacks in the world” — and $500,000 in sales in their first year?

And more importantly, could you apply the same strategies to help local businesses take their products online?

This story features Dustin Riechmann, a long-time Side Hustle Show listener. He has a blog called EngagedMarriage.com, and with the online marketing skills learned there, started a new consulting business to help other businesses build their online presence.

One of his clients was a local butcher shop. Impressed by one of their products–a higher-end, clean-ingredient meat stick–Dustin felt there was an opportunity to reach a lot more customers online.

So, he made Ryan — the owner of the butcher shop — a low-risk offer to partner and launch the product online.

What followed was a series of wins across multiple marketing channels and through a number of innovative promotional tactics.

From Consultant to Partner

Dustin was doing some consulting work for Ryan Hansen, the owner 3 brick-and-mortar butcher shop locations. He loved their products and saw the potential for much wider distribution.

At the end of 2018, Dustin proposed a performance-based deal where he would earn 5% of gross sales.

(As his role — and sales — increased, so has his take. Dustin ended up buying an equity stake into the company.)

“It’s been a really great business marriage. Ryan had an awesome product, he already had everything ready for market,” Dustin told me.

Dustin said it’s been the combination of having a great product, Ryan’s wholesale experience, and his online marketing skills that made this such a success.

Setting up an Online Store

To start with, Dustin set up an online store using WordPress and Shopify to power the storefront and take payments.

When thinking about how he was going to market this product and drive traffic to the store, Dustin said he asked himself, “Who would this appeal to?”

The first thought that comes to a lot of people’s minds when they hear about meat sticks are greasy products like Slim Jim’s. However, Dustin found there was a lot more to the meat stick market than he first thought.

“I didn’t know at the time, but I quickly realized at the other end of the spectrum there is an entire market of uber-clean snack sticks,” Dustin told me.

The FireCreek product fell somewhere in the middle. It’s a clean meat stick, but more flavorsome than those “uber-clean whole30” sticks, as Dustin calls them.

That was the unique selling point he settled on when marketing these meat sticks. He claims they’re healthier and tastier than your regular meat sticks. Their marketing tagline is “the best snacks in the world.” 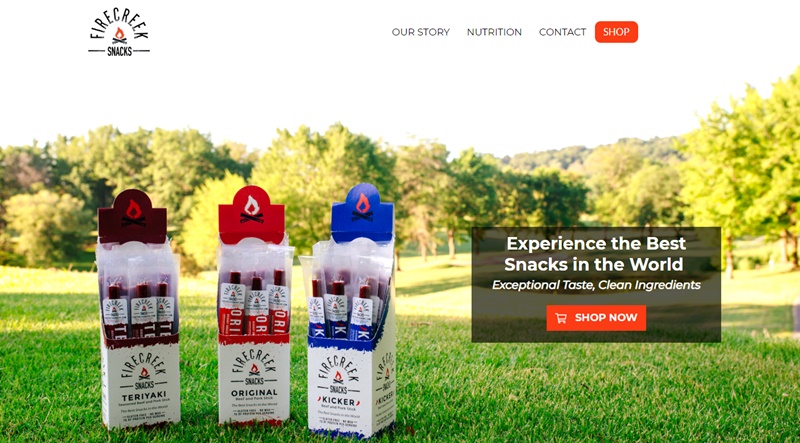 What Marketing Tactics Did You Use to Drive Online Sales?

The first thing he did was send out an email to FireCreek’s email list they’d built up from their main brick-and-mortar business.

(Ryan had been collecting emails though a loyalty program he’d been running in-store.)

These customers were already familiar with FireCreek products, so were warm leads and converted well.

During the holiday season of 2018-19 Dustin started running some Facebook ads using their lookalike audience targeting.

His early campaigns were successful so Dustin decided to hand this over to an agency to handle.

He admits that was one of his first mistakes.

The agency ended up pushing the ads way too fast to try and cover their fees and spent too much money.

They were breaking even looking at just the ad spend vs. sales, but after deducting the agency fees and cost of goods, they were losing money.

About the time when they were deciding to pull the plug on the Facebook ads, some opportunities came up to sell their product through wholesale.

In January 2019, Dustin and Ryan decided to go to the PGA merchandise show. This is a huge show for golf pros, golf course owners, and other golf-related businesses.

It came with a huge price tag. The booth was $13-$14k, there were travel expenses for 4 people, they flew in 10k samples, and hired local models to work the show.

But they ended up selling their product into over 120 golf courses and made a load of sales from their booth.

This opened their eyes to the opportunities available through trade shows. Dustin and Ryan ended up going to 12 more shows that year, and got their product into more than 600 retail stores.

Although Dustin originally signed up to establish FireCreek’s online presence, the business took him more in the direction of wholesale.

Ideally, he’d like a 50/50 split between wholesale and online sales as diversity is better for business. But they’ve started doing more on the wholesale side.

The main advantage to wholesale is that the average order is a lot larger, so there are fewer handling and shipping costs.

The main drawback is that the profit margin is a lot lower as you’re selling to another store that needs to sell the product at retail and make a profit.

In this example, you’d make $15 gross profit ($20 price minus $5 cost) on every retail sale, and $5 gross profit on every wholesale order. The hope is wholesale customers make up for the lower profits with greater volume.

How Are You Handling Logistics and Distribution?

Ryan has a warehouse at the same location where he makes his meat products, so all the direct-to-consumer sales are being handled in-house.

They also have some large pallet orders for their large retail contracts. These are sent out directly by their co-packers as it makes more sense and reduces costs to send those out directly.

Getting on the Shelves in Walmart

Breaking into Walmart was huge for Dustin and Ryan. The initial contact actually came from the manager of one of their local stores.

He reached out on Facebook and left a message saying he was enjoying their meat stick. This was obviously a good sign, so Ryan got in contact with that manager and arranged a meeting with him.

They ended up coming to terms to supply that store with their meat sticks. They have to maintain and restock their section in-store themselves, but the exposure and volume of sales Walmart drives are unmatched with other retail stores.

Once they had their foot in one store, they started reaching out to more Walmart stores in their greater area. They now have their product in 55 Walmart stores and have a dedicated worker to restock the shelves.

What Else Has Worked Marketing-Wise?

Some other marketing tactics Dustin and Ryan have used over the last couple of years includes:

Dustin and Ryan approached a local school that holds fundraisers about offering their snacks. They gave them a no-risk offer saying they’ll buy back any stock they don’t sell.

Last year they did three of these fundraisers. It was also great exposure within their local community and both they and the organizers made good money.

One of Dustin’s other clients is in the BBQ niche, which he calls a “shoulder niche” to the meat snack niche.

He gave his client $500 and a 25% discount code and asked if he could email his list a couple of times. This generated more than $1,500 in sales and added some recurring customers.

They had a display stand spare, the kind they use in stores when selling their products. It had a $500 value, so Dustin decided to run a giveaway online using KingSumo.

KingSumo collects all the entries and people can earn more entries by sharing the contest on social media or with their friends.

This added several thousand more subscribers to their email list and brought in some new business. Dustin said the only downside was that he had to trim some of those subscribers down the line as they were inactive.

They also paid for some air time on a popular local radio show where they live. Dustin said this had a direct impact on their Walmart sales, as well as noticing a spike in online sales for the times of the ad reads.

Groupon actually reached out to Dustin and Ryan, and they were happy to give them a go.

They’ve been running a deal on Groupon for 8 months now and said they’re making money on every transaction, and gaining new customers on their email list every day.

What’s Next for FireCreek Snacks?

“What I really wanna do is get the product into people’s hands for free. Then make them a convert to the FireCreek family and make them a lifetime customer,” Dustin told me.

Dustin really is confident that FireCreek Snacks really are the best snacks anyone will ever taste. He said that if he can get someone to taste one they’ll become a recurring customer.

So he’s launched a new funnel where they’ll test giving away samples for free. All you have to do is pay a small shipping fee, and you can try them for yourself.

Dustin said he’s going to make a loss on each of these sales, but it’s worth it because he believes a certain percentage will become lifelong recurring customers once they’ve tried the product.

Dustin’s #1 Tip for Side Hustle Nation

“Always be looking for an opportunity to give someone else a win. Serve first.”