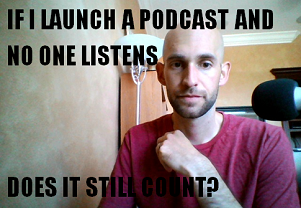 Today I’m going to share the exact strategies and steps I took to get The Side Hustle Show to the top of the iTunes New and Noteworthy charts.

Why Should You Care?

Apple gives new podcasts an 8-week takeoff period in which they have an easy-to-capitalize-on opportunity to gain listeners. They call it “New and Noteworthy,” and it is aggressively positioned inside the iTunes interface.

When launching a new show, the New and Noteworthy section for your category is absolutely the most important place to be, and your best chance at reaching a massive audience of new listeners.

Oh, and did I mention it’s FREE? 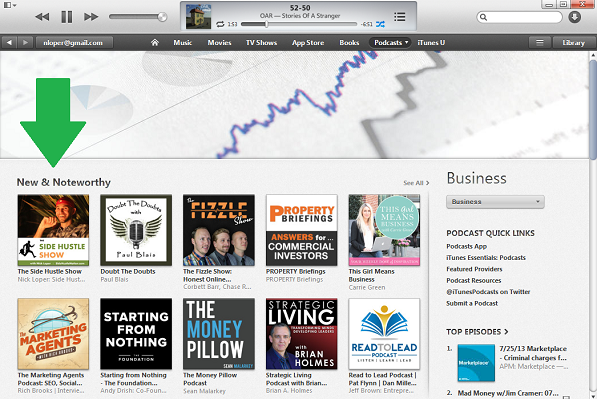 Check me out, enjoying my 15 minutes.

What About Android Users?

The whole world isn’t made up of Apple users! What about the rest of us?

What about them. They’ll still be there when your limited window of  iTunes time is up.

Note: I did launch on Stitcher as well, which has an excellent Android app, but to my knowledge they don’t offer up such prime real estate to newbies so I opted not to spend any time promoting there.

Hold Back, and then Release

I purposely waited until I had 4 episodes recorded, edited, and published before submitting my podcast feed to iTunes. Why?

Because their ranking algorithm uses the number of downloads as a factor. If I only had two episodes available for download at launch, I’d have cut my download potential in half right out of the gate.

Now obviously there’s a sweet spot on how long you should hold back, depending on how often you plan on publishing and the size of your existing audience.

The more episodes you launch with, the fewer people you’ll have to reach to attain a certain volume of downloads.

Because of this, the smaller your existing audience, the more episodes you’ll want to have ready to go when you submit to iTunes.

Let’s address the audience question. I think Chris Ducker put together an excellent post on launching a podcast earlier this year. In fact, prior to reading that I didn’t realize there was any strategy to it all.

Disclaimer: I have a lot of love for ALL my guests for taking time out of their busy schedules to share their entrepreneurial wisdom. I’m merely using twitter followers here to make a point about “reach.” Probably not a perfect metric, but let’s just go with it for a minute.

When I launched, I literally had 11 people on my email list.

But the New and Noteworthy section is still ripe for the picking, even if you don’t have any audience to start with and aren’t launching with “big name” guests.

So what did I do? A couple things. Facebook for one, and then started working the phones. Well, working the emails would be more accurate.

Even without a large “tribe” of fans for your blog, you probably still have a decent number of Facebook friends. People who are willing to take a couple minutes out of their evening to download a few episodes of your podcast. Maybe even spread the word or leave a quick review.

I was thankful to have several friends share the news of the show with their friends. It was like going mini-viral.

Then I went through and emailed everyone I could think of who might either be interested in the show, or who I thought might be willing to spare a couple minutes to help me out.

Literally what I did was I went letter-by-letter through the entire alphabet in my gmail address bar to see what suggestions would pop up.

I found most people were more than happy to help, and it was an excuse to reach out to long-lost friends as well. I probably sent 100 of these emails and I’m so thankful for everyone who took action and downloaded a couple episodes.

Both on Facebook and in the emails I was clear that they didn’t need to actually listen to the podcast, and that simply downloading it would be really helpful.

It Doesn’t Take Much

I was surprised how few downloads it actually took to make waves in iTunes. If you can get a spike of 100 downloads in a day, I’m confident you’ll be on the first page of results.

It doesn’t take much.

And the great news is, once you’re up there, the exposure tends to keep you there as long as you keep publishing new episodes consistently. At least that was my experience.

I quickly developed an unhealthy addiction to checking this download chart.

Not Just Ratings, But “Rating Velocity”

One final observation I had is that the “rating velocity” — the speed at which ratings and reviews are submitted to iTunes — seems to play a big role in their ranking algorithm as well, perhaps even more than downloads.

To capitalize on this, you might save all your outreach emails in your Drafts folder and unleash them all at once to try and maximize both the download and rating velocity.

I saw my ranking spike both on high-download days and on high-rating days, so both are important, and iTunes adjusts the rankings several times throughout the day. One risk of batching everything close together like this is that a quick spike may come at an inopportune time to capture enough eyeballs to keep you in that high position.

You’d hate to have used all your favors and then crash out of sight.

By the way, if you’re reading this and haven’t left a 5-star rating yet, would you mind helping me out?

A well-orchestrated launch can mean thousands of new people being exposed to your ideas and your brand. The most rewarding thing for me has been getting emails from new listeners saying they’re liking the show so far and to keep up the good work.

Were you one of them? Let me know!