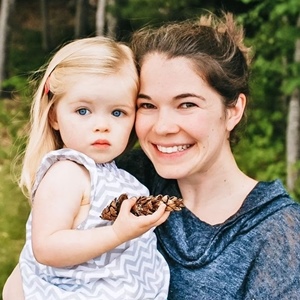 Megan Champion is a mom of 3, a 15-year elementary education teacher, and in the past year, she’s started a side hustle that earned $20,000.

Megan’s side hustle is in the parenting niche and has 3 main parts:

In this episode, you’ll learn how all three of those work and how they work together to build Megan’s business — and how you may be able to apply some of the same strategies to your own business.

The exciting thing here is that the audience numbers that Megan shares aren’t huge, but they’ve still been enough to build a pretty substantial extra income stream and help a lot of people at the same time.

The Inspiration to Start a Podcast

Megan was facing the day-to-day challenges of raising a neurodivergent child and the self-imposed guilt, blame, and anxiety that goes along with it.

Finally, she realized she couldn’t be the only mom going through this.

So, Megan decided to start talking about it. In early 2021, Megan started the On The Hard Days podcast.

Related: How Much Does it Cost to Start a Podcast

“At that time I had no desire to bring on any guests, it wasn’t really about that. I didn’t even know where to start, I didn’t have any listeners, I just wanted to vent,” Megan told me.

The very first episode is called My Rock Bottom Parenting Moment. “I just jumped in the deep end with a really tough incident that happened with my son and I,” Megan explained.

The first 10 episodes are just Megan sharing her stories. Then someone suggested she start bringing on other people with stories to share, and that’s when the direction of the podcast changed.

“I had a little Instagram at the time, a little tiny one,” Megan told me.

Megan would share her podcast episodes with her 20-30 Instagram followers and would try to engage with them by asking what they thought.

Megan said she also joined Clubhouse, a social network where people can chat with one another and listen in on conversations.

She found a couple of other moms dealing with similar issues as her on Clubhouse, and they ended up appearing as guests on her show.

Megan admits that the first 6 months were really slow in terms of listenership. But in the second half of her first year, she started seeing some momentum.

Competitive Analysis and Doing Something Different

About 6 months prior to starting her podcast, Megan started listening to various parenting and motherhood podcasts.

From listening to these shows, Megan realized there was something missing — or at least she couldn’t find a podcast covering the stuff she wanted.

Megan explained that all of the podcasts she found were “advice-driven”, didn’t have interviews with “real moms”, and she never heard anyone saying, “this is really hard.”

While Megan didn’t do any detailed competition analysis, this was enough for her to want to start her own podcast.

Megan wanted to talk to other moms going through the things she was and have them share their experiences raising a neurodivergent child.

The Moment of Validation

During the first year, Megan’s audience was growing slowly, mostly through word-of-mouth.

Megan said she started to offer 10-minute discovery calls for moms who might want to be on the podcast.

Megan also went into some Facebook groups and dropped a message letting moms know about the discovery calls.

Expecting maybe 10-15 moms interested in being on the podcast, Megan said she was surprised when she had 100 moms message her and show interest.

This was the point where Megan realized there was potentially a huge audience for her show, and that she had plenty of guests lined up.

“I was able to batch record months and months worth of podcast episodes just from that outreach,” Megan told me.

At the year mark, Megan said she had a total of 20,000 episode downloads.

To date, with her podcast being live for a year and a half, Megan has just passed the 42,000 download mark.

Megan currently gets around 1,000 downloads per week.

Megan explained that after the discovery calls and interviews with moms were over, she still wanted to keep in touch with them.

Her podcast was more than just telling her story and the stories of her guests, it was a way for Megan to connect with other moms going through similar challenges as she was.

“I was really looking for friendship, connection, community,” Megan told me.

This is what made Megan realize that there was a need for a platform that could facilitate a community of mothers raising neurodivergent kids.

In a way, she gets paid to be an online friend and connect moms with other virtual friends.

Megan said she could see there were groups and communities for parents of children with autism and other diagnosed conditions, but nothing for parents whose children didn’t have a diagnosis.

This is what gave Megan the idea to start an online membership community, which she’s called Mother’s Together.

Starting this membership community has “completely changed my life and the trajectory of my business,” Megan told me.

What’s Inside the Membership?

Megan has created a monthly membership and community with a strong emphasis on providing support to the members.

There are three main parts to the membership:

There is a forum where moms can post questions and discuss topics with other moms.

This forum is powered by its own app, it’s not part of any social media network, and also acts as a searchable database.

Users can search by age, location, diagnosis, and various other categories to quickly find all the threads related to their topic of interest.

When a new member joins, they receive an email asking a few questions about their personal circumstances and what kind of support they’re looking for.

Megan goes through these answers and personally matches each member up with other moms going through similar things.

Megan said she started out hosting weekly meets on Zoom with members. But that’s since turned into much more frequent meets among the members.

Most members will connect with their support partners or “pod squad” as Megan calls it, and chat using MarcoPolo.me daily, even several times a day sometimes.

Megan also has a personal thread with each mom open on MarcoPolo but understands that as her membership numbers continue to grow her time is being spread pretty thin.

Once a month Megan brings a guest expert and hosts a live Q&A on Zoom. So, there is some expert content behind the paywall, but most of the content is created by members in the forum.

Launching and Pricing a Membership

When Megan first had the idea to launch a membership she reached out to 10-12 moms she had already connected with and asked if they’d jump on a Zoom call to discuss it.

“They loved it,” Megan said about their reaction to her membership idea.

Megan also asked if they would be her founding members and sign up for a monthly fee of $19.99, and they said yes.

Megan said she wanted to create a membership where moms could come and go without any pressure or the need to commit.

There are no yearly options, just a monthly fee. The price point has been going up since launch and was $40/mo at the time we recorded.

“The whole thing is supposed to feel very à la carte, take what you need for support and leave,” Megan explained.

But what surprised Megan is her retention rate.

“They don’t leave, and that’s the magic, because of the friendship and the deep connections,” Megan told me.

Megan’s goal has been to add another 12-15 members per month and create a couple of new groups.

Her numbers have been growing steadily and Megan now has more than 100 members since launching last August.

The tools and tech Megan is using to run her membership business are:

Every month she goes live on Instagram with other mothers, shares testimonials from her members, and engages with her followers.

Megan had 12k followers at the time of the interview and attributed most of her growth to “reels, it’s totally reels all of the way.”

Reels is one of the post options Instagram makes available. Basically, a reel is when you record a video clip of yourself with a piece of audio from a film, song, or something else added over the top provided by Instagram.

Megan said it’s important to pick a soundbite that’s trending (you’ll see an arrow pointing up next to the clip) as this increases the chance of your reel being seen.

Megan picks soundbites that typically have less than 1k views, so they’re not too heavily used.

She then tries to find a way to fit the audio into a scenario that works as a mom with a neurodivergent child.

Megan has had some of her reels go viral. She’s also seen her views and followers go up as a result of posting regularly.

You can see exactly how Megan creates her reels by checking out her On The Hard Days Instagram account.

Paying members in her Mother’s Together membership is Megan’s main source of revenue.

Megan has tried some other things, such as designing shirts and setting up a Patreon, but admits she hasn’t put enough time into those to make them work.

Megan has a new program in the works, it’s a transformational program that has a start date and an end date.

It’s going to be a 6-month course giving moms a deep dive into who they are and helping them find their confidence again.

Megan is bringing in some experts to help out and is excited to run a pilot test in October, and launch it in January of 2023.

The program is going to be called Evolve. You can be among the first to know about its release by following Megan’s Instagram or signing up for her mailing list.

What Does a Day in Your Life Look Like?

Being a mom, a teacher, and growing her side hustle has been a challenge. On a typical day, Megan is unable to do anything until her kids are in bed.

Megan said that if she didn’t believe in what she is doing, she wouldn’t be able to do it.

Making a difference in the lives of other moms in a similar situation to hers is what drives Megan, she really wants to create the go-to place for moms with neurodivergent kids.

Megan’s #1 Tip for Side Hustle Nation

Win of the Week

Do you have a win to share — big or small? Drop me a voicemail for a chance to be featured on air!