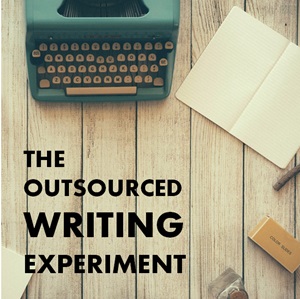 For my latest book project, I had this wonderful idea that if I could get someone else to do the writing, I could get it to market faster.

I was super busy and eager to expand my self-publishing efforts.

You may have heard the stories of successful Kindle authors who actually use ghostwriters to create their books. The “author” just researches the topic they think will sell, and then hires someone to produce the content.

Since I’m all about efficiency, I figured it was worth a shot.

I had my book idea, a checklist of elements that small business websites should include. The idea came from some video site audits I’d been doing on Fiverr.

Note: While those audits were fun, they were a little too time-consuming at that price point. This book was going to be part of my strategy for increasing the average order size. And in the meantime, I was happy to be collecting the experience and feedback from actual (even if just $5) clients.

So I did my research and compiled my list, actually turning it into a pretty detailed outline.

Next, I was ready to find my writer.

Setting Up the Ghostwriting Job

I crafted an awesome job description and posted it to Elance and oDesk, following the tips you’ll hear in this week’s podcast. (I know, such a tease.)

I also made sure to include an “Easter egg,” which is outsourcer-speak to ask for some specific detail the applicant should mention in their response so you know they actually read and understood your post.

For example, you might ask freelancers to include their favorite movie, or to begin their reply with the words “O’Doyle rules!”

In total I received 14 proposals; 7 from the US and Canada, 2 from the UK, 1 from Croatia, and 4 from South Asia (India/Pakistan/Bangladesh).

The fixed price bids ranged from $10 (from a girl in Pakistan who obviously didn’t read the job description) to $500.

As is typical, I removed the outliers high AND low, as well as the people who didn’t include my “Easter egg,” which was to begin their reply with, “Hey Nick, you’d be dumb not to hire me because…”

Ultimately I settled on a writer from Canada who had an excellent profile history on Elance and lots of positive feedback.

Her bid was $220, which was middle of the road, and she promised to deliver the book in 1 week. Great!

So far so good.

Things got interesting almost immediately after awarding her the job.

I sent her my outline and we set up a Skype meeting to discuss the project in more detail. She actually suggested the time, but then missed the meeting entirely. Later, I got this note:

“I gave you wrong time my bad.. I’m right now in gym give me 2 hours and I’ll get back to you. I sincerely apologize for the confusion.. I hope you not mad at me. :(“

When we finally did connect on Skype, her “flag” showed as Australia, not Canada, like was indicated in her Elance profile.

Both her Elance and Skype profile pictures were blank. Something to hide, perhaps?

Still, she assured me she understood the project and would get to work on it immediately.

A couple days later, and one full week after I sent her the outline, I got this message:

“Please provide me rough outline your promised me in project description… kindly update me asap. :)”

Umm, I sent you that a week ago, and if this is how your writing is going to be, we’re going to have a problem.

But I understand online chat is more informal and maybe she really is a good writer. After all, she had a strong profile and tons of completed work.

Ten days later, I had to ask for an update on my “one week” project. A few hours after that I had her draft in my inbox.

I was nervous to open the file, and for good reason.

When I did, I found the text to be … passable. Suitable. OK.

She followed the instructions and the outline and delivered what we agreed on. It was 12,700 words.

I mean, it was technically proficient.

The sentence structure and word choice in certain parts confirmed my suspicion that she was not truly a native English speaker. Something was just a bit off, you know?

Still, she technically followed the directions and kept up her end of the bargain so I wasn’t in a position to ask for a full-scale re-write or to dispute the job.

I released the funds in Elance and marked the job as complete.

I literally re-wrote the entire book. I might have salvaged a sentence or two, but essentially 99.9% had to be scrapped.

Since I was expecting to sell the finished work under my name, I wouldn’t have been comfortable charging money for what I knew to be C-grade level content.

I wouldn’t have been comfortable putting my name and reputation on the line with that sub-par writing.

And hopefully some personality and voice, too.

What I Should Have Done

If you’re publishing under a pen name you don’t care about, go ahead and outsource the writing. But even if I’d found a native-English writer, I don’t think I would have been comfortable with it.

It just wasn’t me.

That was an important lesson to learn, and thankfully it was only $220.

One thing I should have done to reduce my exposure would have been to trial three different writers at 1000 words apiece (roughly the length of this post), and see which one came back the strongest.

Live and learn, and chalk it up as another interesting side hustle experiment.

6 thoughts on “The Outsourced Writing Experiment”