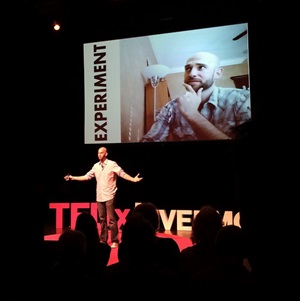 In September I had the opportunity to speak at our local TEDx event, making the case that millennials are the most entrepreneurial generation in history.

And it’s true; 1 in 3 of us has already started one or more businesses.

Over the weekend I got word that the “official” video from the event was live and ready to share. (It’s about 13 minutes — embedded below.)

This was my first public speaking gig since high school graduation. And it was on the TEDx stage! I love watching TED talks and had always dreamed of giving a presentation like this, so it was a pretty big deal!

Only I was insanely nervous. (More on that later.)

Just writing this and watching the video is making me relive the uncomfortable nervousness.

How Do You Get Selected to Speak at a TEDx Event?

So how do you get chosen as a TEDx speaker? I had no idea, but it was something I wanted to do so I sent a cold pitch email.

Hey, if you don’t ask, the answer is always no, right?

The theme of the 2013 event was innovation in education, so my pitch was related to the gap between entrepreneurial education and the real world economic necessity of that education.

Since I didn’t have any public speaking I could point to, I cited the podcast as the next-best-thing.

When I heard nothing for weeks, I figured they either weren’t interested or weren’t doing the event this year.

Then I got an email, explaining that this year’s event was centered on creativity, and asking if I had any thoughts on that.

As luck would have it, I did.

After a few back-and-forth emails and phone calls, brainstorming what unique angle I could bring to the event, I was officially added to the speaker roster and tasked with coming up with a talk that would bridge creativity with millennial generation entrepreneurship.

Hard to ask for a better tie-in to my work at Side Hustle Nation!

Later, I found out that nearly all the other speakers were in the personal or extended networks of the TEDx event organizers — so if you want to speak at a TEDx event, the best advice I can give is to find out who the organizers and speaker coordinators are for your event and begin to get to know them any way you can. 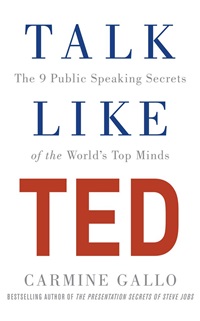 The first thing I did was read Talk Like TED, a book that analyzed the best-of-the-best TED talks to see what they had in common.

Easier said than done, but easier when you have a topic you care about. As he writes, “You cannot inspire others unless you are inspired yourself.”

We remember stories more easily than facts and figures, so I tried to weave in a few stories and examples.

For the 3 or 4 weeks before the event, I went on a strict podcast diet, which was my normal pastime while driving or walking the dog. Instead, I used that time to go over the presentation in my head or out loud, talking quietly to myself.

I’m sure other people on the road or on the sidewalk thought I was nuts.

One weekend while Bryn was off shooting a wedding, I did laps around a hiking trail with my iPad just rehearsing to myself.

On stage, there’s no teleprompter and no notes, so I had to commit the thing to memory.

I also owe a huge debt to my friend Theresa Campbell (aka Coach T) who helped listen to my presentation and give feedback on my drafts.

4. Teach Your Audience Something New.

I sought to teach that millennials are shaking off the label of “The Entitled Generation” with triple the rate of entrepreneurship as the rest of the population.

The example cited in the book was when Bill Gates gave his TED talk on eliminating malaria, he released a swarm of live mosquitoes into the audience.

My favorite TED talks are the ones that use humor to help get their message across, so I tried to do the same.

But humor is risky because it can bomb or come across as desperate or insincere.

I got a couple laughs :)

There’s some scientific evidence to suggest that’s about the limit of our attention spans so by rule, all TED presentations are capped at 18 minutes.

What I didn’t realize is that for TEDx events, the amount of time given to each speaker will vary to break up the pace of the day as well. I had 13 minutes and was happy to see the YouTube timestamp come in at 12:50 because I lost all track of time while I was up there.

This is PowerPoint 101. The slides are there to illustrate your words, or support your points, not to spell out your message word-for-word.

In addition to reading the TED talk “textbook,” I also watched and re-watched several presentations to get an idea for what I liked and didn’t like.

So I owe a big thanks to Jullien Gordon, Sir Ken Robinson, Peter Diamandis (my all-time fave talk), and many more for your silent inspiration.

I started out by brainstorming some ideas and talking points, which turned into written rough draft. With only 13 minutes to present, the entire thing scripted out was a little over 1800 words.

In the context of a blog post, that’s not much space to make your case with authentic, passionate, humorous, jaw-dropping, and educational stories! (For the sake of comparison, this post is just under 1400 words.)

Bryn and my brother Chris also helped edit and give feedback on the various drafts I created.

TEDx Livermore assigned me a speaker coach, Kathy Ohm. Kathy was a HUGE help and we met several times leading up to the event to refine the message and rehearse.

She wasn’t impressed with my first draft, calling it “mildly entertaining,” and challenging me to do better.

Millennial entrepreneurship is driven both by reactionary and proactive forces. First, the unpredictable and often unfavorable environment we find ourselves in in the economy and workforce necessitates taking matters into our own hands. That’s the reactive part.

But entrepreneurship suits us because we value the flexibility, freedom, and impact of doing our own thing.

My message centers on the 3 Cs:

I argue that these are key ingredients in any business venture, and give some examples of what they look like in practice. I note that creativity is often found in unlikely places, and that the 3 Cs don’t discriminate by age. They are open to everyone.

I was a nervous wreck leading up to the event. I definitely didn’t expect to be so nervous … I volunteered for this, I kept reminding myself!

Bryn keeps reminding me how NOT fun I was to be around those few days.

But it had also been a REALLY long time since I’d been on any kind of stage, and my fellow speakers all had such impressive resumes and messages to share.

I think I just wanted to perform well and not look like an idiot in front of everybody and on the video.

One weird thing was that nearly as soon as I got up there, my mouth went bone dry. Like as dry as it’s ever been. Super weird, but apparently it’s a physiological stress response.

It was such a cool event to be a part of. All the organizers, volunteers and speakers were so supportive I loved getting texts on the day of the event from friends rocking their “Everyday I’m Hustling” t-shirts that just happened to be delivered that day.

All in all, very grateful for the opportunity!

Have you ever done any public speaking? How did you get over the nerves? Is it just a matter of practice?

If you were giving a TED talk, what would it be about?

What do you think about the 3 Cs? 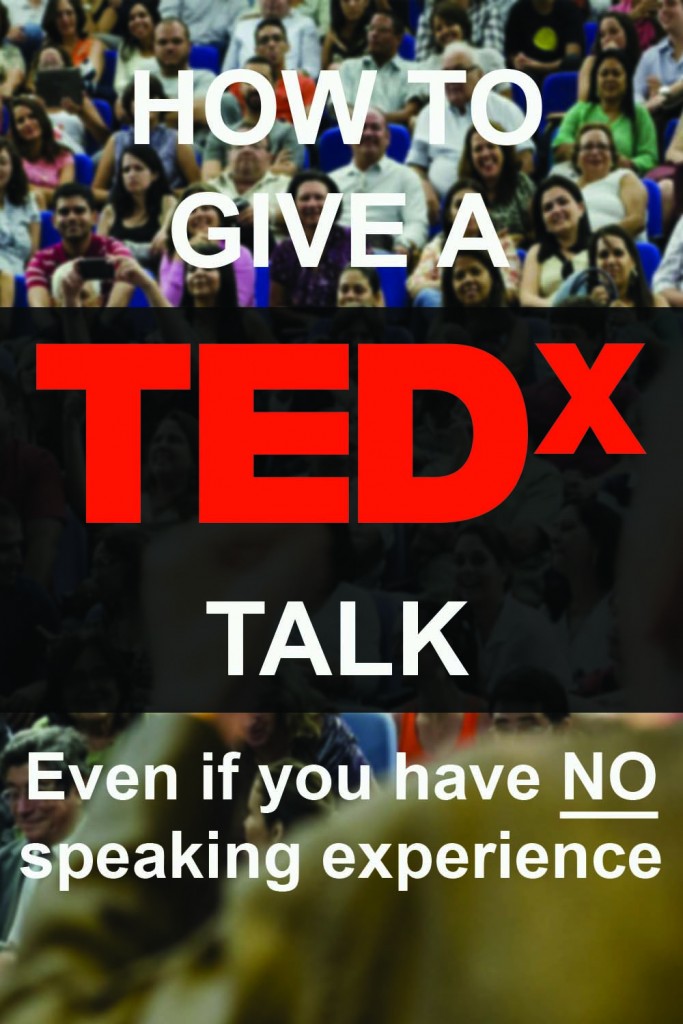