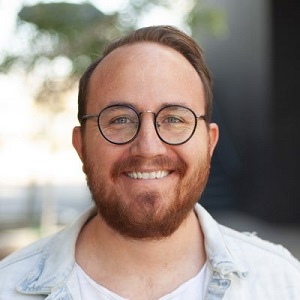 No skills to start a side hustle?

Today’s guest, Chris Misterek of SelfMadeWebDesigner.com didn’t let that hold him back.

He went from being in a tight spot personally and financially, to bringing in an average of $3k a month on the side through his new web design business.

With no previous experience with web design, Chris decided to start at the ground up by working through some free online courses.

Tune in to this episode to hear Chris explain how he:

Why Did You Decide to Become a Self-Made Web Designer?

About 6 years ago, Chris went through a split from his wife. This had a huge impact on his life, both relationship-wise and financially.

“I had to figure out a way fairly quickly to learn how to make some extra income on the side for me and my 3 daughters,” Chris told me.

He didn’t want to leave his full-time job, but his salary wasn’t enough to support him and his family.

A friend suggested he look into doing some web design. So, Chris found some free online courses and worked through them as quickly as he could.

“A few months later, I was telling people I was a web designer,” he said.

Important Takeaway: You can learn valuable new skills! Here are some freelance skills that are in-demand right now.

Did You Have a Background in Design?

The interesting thing to note here is that Chris was working as a Worship Pastor at the time. He had no experience with web development, and his day job was pretty far removed from this line of work.

He says the one thing that did help him was his degree in business management. Although he hadn’t used it for years, it helped when it he started pitching his services to clients.

Something else that played into his favor was that he realized he loved web design once he started working through the online courses. If you love what you do, that goes a long way.

How Did You Learn How to Do Web Design/Development?

Chris started out on a platform called Code Academy. At the time it was 100% free. (Chris said they now have some paid courses, but you can still access all the same stuff he did for free.)

He also took an online course offered by his community college, but Chris said the bulk of his learning came from actually working on projects.

Chris added that there’s a misconception that to be a web developer you have to know everything.

He’s always Googling things he needs to know, and after starting as a full-time UX developer this year he’s noticed that even experienced developers still look up answers.

Whatever it is you want to learn — it doesn’t have to be web development — “there are places and avenues to learn it for free,” Chris said.

“I’m the kind of person that jumps both feet in before I really consider things,” Chris told me.

Chris did add that it’s important to look at the competition and demand when entering a market. But he also said that everyone has something different to offer, and he was confident he’d find a unique selling point for his business.

How Did You Land Your First Clients?

Chris’s first clients were all friends and family. He did his first job for free, then after that one he started a fair price as he was still learning.

He said that too many new freelancers think they should work for free to build up their portfolio or gain experience. If you know you’re offering value to the person, Chris said there’s no reason not to charge them.

Eventually, Chris needed to expand outside of his network of friends and family members. So, he joined Upwork, one of the world’s largest freelance marketplaces where freelancers can connect with clients.

What Worked for You on Upwork?

Chris said he found it difficult to gain traction at first. He put together a profile and was bidding on jobs, but said he wasn’t getting any jobs until he really started to figure out the platform.

A piece of advice someone gave him that worked out well was not to list everything he was good at. Instead, Chris dialed in on a few key skills he had, which were:

After doing this, he started getting people reaching out to him needing help with OptimizePress, and this was how he landed some of his first clients on Upwork.

Upwork Alternative: Designers, developers, writers, and marketers — consider checking out Solidgigs. They send out curated freelance gigs every day, and have an awesome library of training to help you succeed. And it’s just $2 to try for 30 days.

It was 3 months in between his first and second gigs, but momentum really started to form from that point.

As Chris accumulated more positive reviews on his profile, clients started reaching out to him instead of him having to bid on jobs.

Chris added screenshots of the websites he made and attached them to his reviews, so prospective clients could see his work.

Momentum really picked up when Chris was featured as a top-rated freelancer. This was also around the time that Upwork went public with their stock, and Chris found himself featured in some of their ads and within the platform.

It was great free promotion, and while it didn’t last long, it certainly helped bring some business his way.

Avoiding the “Race to the Bottom” on Freelance Marketplaces

One of the pushbacks of platforms like Upwork is that the freelancers and clients are global. This means you’re competing against freelancers in developing countries who are often willing to work for a lower rate.

To avoid getting into a bidding war, Chris said it’s important to learn how to filter jobs on Upwork. When he got started, he asked himself “who would be looking for me?”, or “who would see me as the ideal freelancer?”

He figured it would be someone who was:

So, Chris set filters to only show jobs and clients that met these criteria. By lining up his skills with what clients were looking for, Chris said he was able to find the clients willing to pay what he wanted.

You can also filter on U.S. only jobs if you’re in the U.S. Some clients just prefer to work with local freelancers or want someone in the same time zone.

Anything Else Worked to Market Your Business?

Chris didn’t like the idea of relying on one source (Upwork) to drive business, so he also explored finding clients through local SEO.

You can add your business to Google through Google My Business. If you work from home, here’s how to do it without having to publicly list your home address.

Chris said this started to give his site more exposure in the search results for people looking for web designers nearby.

He also had past clients leave Google reviews for his business. Chris said this form of social proof helps both SEO and people browsing you and your competitors.

The biggest pivot Chris has made so far was quitting his day job as a Worship Pastor and taking a full-time position as a UX designer.

He was debating going full-time as a freelancer, but he really resonated with the company he’s now working for and wanted to join them.

Plus, they’re just 4 miles down the road from his home, which helps.

While not at his day job, Chris is pulling back on freelancing and focusing his efforts on his site SelfmadeWebDesigner.com.

His mission is to help others follow in his footsteps and find their way with freelancing.

“I’d love to build a legacy of people who can learn to do what I’ve done and have it change their lives like it changed mine,” Chris told me.