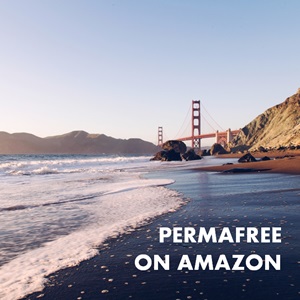 In January, I had a chance to sit down with Nick Stephenson, a top-selling Kindle author in both fiction and nonfiction. We recorded a podcast session on building an email list from Amazon.

The “hook” was Nick built a massive list of 15,000 email subscribers in just a few short months, using one pillar strategy: giving his books away for free.

The first was with his fiction work, a crime thriller series where he decided to make the first title in the series “permafree.” Later, he pulled the same trick in non-fiction with a giveaway (very meta) called Reader Magnets.

In each case, Nick included an email opt-in offer in the book for more valuable content. Here’s what it looks like in Reader Magnets: 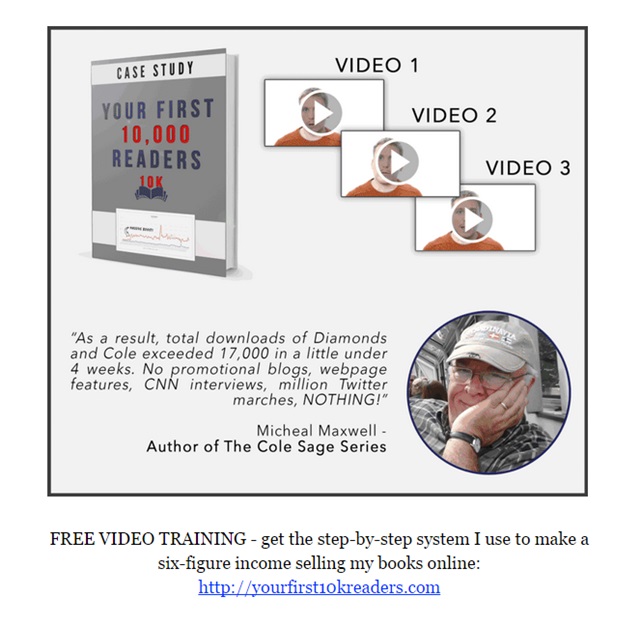 Why go through all the trouble of writing a book, only to give it away?

Answer: To build an audience.

As we’ve seen in case study after case study, doing business online becomes much easier and much more profitable if you have a built-in audience who loves your work.

I made the case that having a “permafree” book on Amazon is the equivalent of guest blogging on steroids. It’s one of the most highly-trafficked sites in the world, which means the potential to get tens of thousands of eyeballs on your book. You’ll never find a bigger “guest posting” opportunity.

And like a good guest post, your free book can lead people back to your site to learn more about you and opt-in for additional useful content.

Testing Out Giving a Book Away

Inspired by Nick’s results, I was curious to give this a shot myself. I didn’t expect to replicate his numbers, but figured I should test it out and see what happened.

My idea was to actually create a series of Side Hustle-related books, since one blog reader pointed out earlier this year, I didn’t actually have any side hustle-related content on Amazon yet.

Plus, I’d already been creating detailed write-ups for each podcast episode, and reasoned that those could be packaged together and re-purposed into Kindle books. And every 3 months or so, I could have a new title to keep the series growing.

This would be a great way to get the content I’m already creating in front of a wider audience.

And with that, The Side Hustle Path series was born.

Setting up the Permafree Offer

Probably before you even begin writing your book, you’ll want to think of what your opt-in offer will be. In my case, I used another Kindle book, Volume 2 of The Side Hustle Path.

In the permafree book, my offer looked something like this: 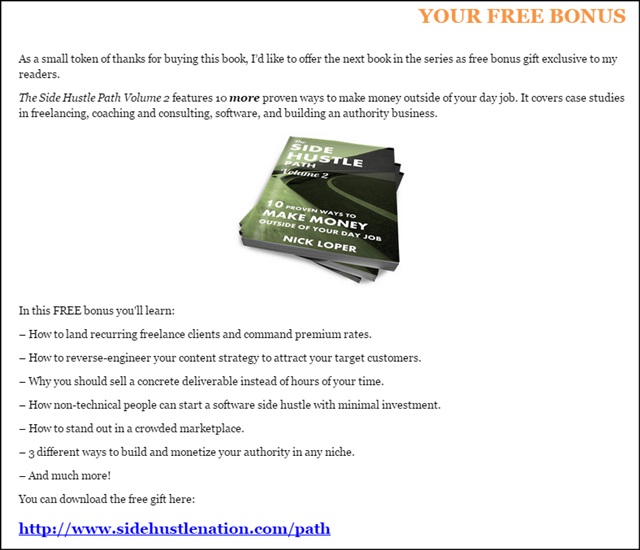 And if you want to check out the landing page, here it is. (Built using LeadPages.)

With your email management software, be sure to set up a unique intake form so you can tell how many subscribers you’re earning from this effort.

How to Make Your Book Permafree

Some authors will tell you it’s as easy as emailing Amazon’s publisher support and asking them to change your price, but I actually had a bit of a challenge with this process.

The basic theory is that Amazon wants to have the lowest prices (after all, they’re the Walmart of the Internet, right?), and so they’ll often price match other competing stores.

So the first step after publishing your book on Kindle (make sure NOT to enroll it in KDP select), is to go over to Smashwords.com and publish it there as well, with a price of $0.

I found that Smashwords requires slightly different formatting than Amazon, but their tutorials and support make it easy enough to get this done. The mistake I made initially was not making their required corrections to be included in their “Premium” catalog, which is what makes your book eligible for free syndication to Barnes and Noble, iBooks, etc.

Also note: Don’t include any Amazon links in the version of the book you submit to Smashwords. I found myself in the rejection bin for linking a couple book titles to Amazon. Apparently Apple wants no part of your book if you do that.

Once your book is listed for free on Barnes and Noble or Apple’s iBooks, login to your KDP dashboard and sent a note to KDP Support. Tell them your book is available for free on these other platforms, include a link for proof, and kindly request they match that price of $0 on Amazon.

To my surprise, my first request was flat out rejected. I’d skipped the Smashwords “Premium” catalog step and just sent a regular ol’ Smashwords link to KDP, which apparently they don’t care about at all.

Then, on hearing from Lise Cartwright that Amazon is deathly afraid of Google, I submitted the title to Google Play for free, and asked them to reconsider. They did (for a brief period — more on that below), and I was good to go as permafree.

Note: Apparently Google Play ingests books as PDF files, which after a few weeks Amazon decided wasn’t legit enough for them to price match. That’s when I went back and did the Smashwords Premium thing.

I published The Side Hustle Path around mid-March for $0.99, and got Amazon to price match it to free at the end of the month.

Since then it’s been downloaded 9984 times. Aside from a couple big spikes when I promoted the book on Facebook and it climbed the rankings, it’s been pulling in a very consistent 40-80 downloads per day:

But what about the email opt-ins?

Great question. To date the offer and landing page mentioned above have pulled in 327 new email subscribers, or roughly 3.3% of all downloads.

I’m told that’s a reasonable conversion rate from a Kindle book, although not nearly as high as Nick humblebragged about on the podcast. If I wanted to pump up the volume it would have to come from one of two sources: split testing another offer in the book, or driving up the raw volume of readers.

If the book continues to perform at a similar level, say 50 downloads a day, that would mean another 9000 downloads by the end of the year, and another 300 or so email subscribers. Those numbers may not get you excited, and I’ll admit I was hoping for them to be higher as well, but the permafree strategy is something that’s working passively on my behalf without any upkeep.

My theory is these figures can continue to grow as I continue to build out the series and my Amazon author portfolio.

One interesting thing is the book actually sold a few copies before the initial price match, and again when they decided to stop temporarily in late April. Plus, since authors have to request a price match for each Amazon country-specific store globally, I do see a trickle of sales at $0.99 from international readers.

And perhaps most surprisingly, Volume 2 has actually been making sales as well, even though readers can get it free with their email address.

The big sales spike coincides with the high-point of the free giveaways on the first chart above. It’s earned more than $230 so far. Not a lot, but way more than expected.

Have you ever tested a permafree strategy on Amazon? Is it working for you? What kind of conversion rate do you see from your free book?

13 thoughts on “Permafree on Amazon: How and Why to Give Your Book Away, Plus My Results”