Last month I attended two industry conferences, ICON15 in Phoenix and New Media Expo in Las Vegas. My total travel and registration expenses were just $249.98 for both shows combined.

(Not including food and drinks.)

No matter what industry you’re in, I believe conferences are a great way to make lasting connections and friendships, and to learn from leaders in your space.

My general theory is this: if you walk away with ONE new idea for your business, the time and travel and expense is all worth it.

But it can also be difficult to justify spending that time and money when you’re starting out, so here are my best ways to save money on attending industry conferences.

Because so many people wait until the last minute, most conference organizers offer an “early-bird” registration special where the tickets are steeply discounted.

For instance, I registered for New Media Expo 7 months in advance and paid just $197, discounted from a sticker price of $497 (I think).

(My registration was later refunded after being nominated for a Podcast Award!)

There are a few ways to earn a free pass to the conference you want to attend.

Follow the organizers’ or the official event’s blogs and accounts on social media.

Sometimes you’ll see contests going on to win a free ticket to the show. Bryn actually won a free pass to Affiliate Summit in New York a few years ago by entering one of these contests.

2. Watch For (or Ask About) Scholarships

Some conferences will quietly offer scholarships for new attendees. To inquire about these, I’d send a personal note to the organizer(s) and ask about it, explaining your situation and why you’d like to attend.

Keep in mind that for most large shows, the incremental cost of one extra attendee is next to nothing, and meanwhile they can turn around and tell their exhibitors and sponsors that thousands of potential customers will be in attendance.

If you’re working with a company that is sponsoring the event in some way, they may have extra passes they’re not using.

When the shoe biz was booming, I did a lot of business with Commission Junction. They were a sponsor of Affiliate Summit at the time, and offered me a free pass.

It makes sense, they’re hoping I’d attend, learn something new to grow the business, and in turn make more money for them.

Again, I’d put the feelers out in an email to whoever your contacts may be at these companies. The sponsors are generally listed on the event’s website, and even if you don’t have a relationship today, now’s a good a time as any to start one.

Some conferences have a certain allocation of press/media passes that they give away to drum up exposure for the show. Even if you don’t have a large blog following, you might be able to convince the organizers to let you in on a press pass in exchange for writing about your experience at the event.

In the case of ICON, Infusionsoft actually footed the bill for my flight and hotel as well. Wow!

I know this might be a scary one for some people, but if you’re on a tight budget know this: speakers get a free pass.

If you have some unique angle or expertise to share related to the topic of the conference, I’d shoot over a speaking proposal. Often speaker submissions close several months before the event, so plan ahead.

One cool thing is that even if your proposal is rejected, the organizers might throw you a bone. Last year I proposed a session for New Media Expo, which they declined, but came back and offered me $100 off my registration. I’ll take it!

Some call this unconferencing, some call it “Lobby-con,” but what it is is attending the show without a ticket. You won’t be allowed into the sessions to see any of the speakers, but many of the after-hours events and informal meetups are open to everyone.

If you don’t care much for attending class, strolling the expo hall, or watching keynotes, this could be a great money-saving option. For me, the best part of recent events I’ve attended has been the “hallway sessions” anyway; the informal introductions, networking meetings, and mealtimes with no conference registration required.

At New Media Expo, Chandler drove up from San Diego without a ticket and still managed to get a ton out of the show, even without setting foot in the actual conference.

4. Get the Virtual Ticket

Many conferences record videos of the sessions and make them available online, either in a livestream or for viewing after the fact. The “virtual” pass gives you access to those videos and is generally much cheaper than the in-person registration, and you also don’t have to worry about travel expenses.

The downside of the virtual ticket is you miss out on all the in-person networking that goes on, which for me is the most valuable reason to attend.

5. Use Miles or Points

Last year Bryn signed up for the Southwest Airlines credit card and earned 50,000 bonus points, which was more than enough to fly me to Vegas and back. It looks like they’re still running the offer here.

However, you might consider paying for the flight because business travel expenses can be written-off to reduce your taxable income, whereas flights for vacation or other personal travel will not be.

The same is true with hotel points if you have them.

6. Stay at a Nearby Hotel

Even with a negotiated group rate at the conference hotel, it can still be pretty pricey. What I like to do is search nearby hotels or even Airbnbs to see what else is available. I don’t mind a little bit of a walk, especially if it means saving a couple hundred bucks.

For example, I think the conference rate for NMX in Las Vegas was $189 a night for the Westgate Hotel. Instead, I booked the slightly-dated but nearby Circus Circus for roughly a third of that price.

One thing to keep in mind is that this makes it difficult to retreat to your room in the middle of the day and you may miss those chance-meetings by the elevators or in the hotel bar.

At NMX, I bunked up with my buddy Brad and we split the room cost. In addition to the cost savings, you can also “shrink the show” by tapping into each others networks, and divide and conquer and share notes at the end of the day.

Most conferences are set up so that attendees don’t need to drive.

In the dozen or so conferences I’ve attended, I’ve never rented a car and it’s been totally fine. If there are off-site activities, transportation is normally provided.

In the meantime, it’s all about taxis, public transport, airport shuttles, or lately, Uber and Lyft. Did you know neither Uber nor Lyft operate in Las Vegas yet? Crazy! At one point I saw a taxi line at least 50 people deep. They’d totally clean up there!

9. Book Flight and Hotel Together

For one conference trip to Las Vegas a few years ago, I scored a nice deal on Priceline for a flight and hotel combo that was much better than booking the two separately.

I always recommend checking the package options, and I think you might be pleasantly surprised with what you find, especially when you combine this strategy with the nearby hotels and share a room.

10. Bring Your Own Snacks

Although mealtime is some of the best networking time, eating out 3 meals a day can do some damage to your travel budget.

Sometimes I’ll bring some protein bars or trail mix, and in college Bryn and I even cooked oatmeal using the coffee maker in the room.

Eating on a budget is especially tough in places like Vegas because each hotel has a captive audience and doesn’t need to be competitive; it’s a long walk to the next alternative!

One other thing to consider when booking your hotel is to check and see if breakfast is included. I’m not one to skip breakfast so this is always a huge selling point for me.

For little ol’ introverted Nick, a couple beers can actually be a good networking investment, but drinks — even non-alcoholic ones — can add up fast.

At NMX I actually spent $4 for a 12-ounce bottled water, but at least after that I was able to refill the bottle from drinking fountains again and again.

In the past couple years, I’ve rarely paid less than $8 for a beer at a conference. Since when did that become an acceptable price? Much cheaper to pass on the booze, even though it can be pretty ubiquitous at some events.

12. Wait Until Next Year

If attending the show really isn’t in your budget for this year, it’s OK. Your FOMO is probably making it worse than it really is.

Instead, invest the time and money you would have spent to hustle on your business and make sure you’re in a position to attend next year. Life goes on and the sun will still rise tomorrow.

Any conference savings tips I missed? What shows are you attending this year?

I’ve got Podcast Movement and FinCon still on the books. See you there? 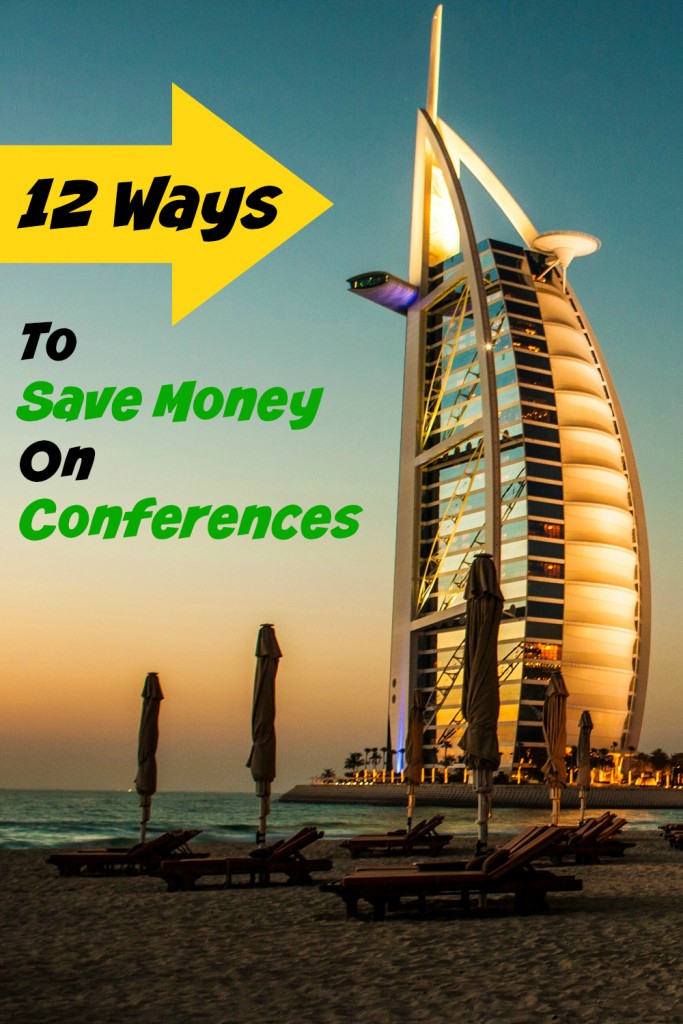 12 thoughts on “12 Ways to Save Money on Conferences”