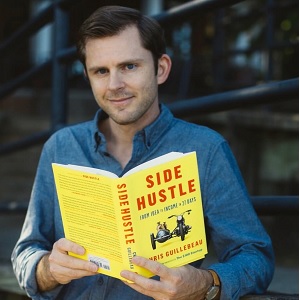 Chris Guillebeau is a tremendous advocate for the lower-risk brand of entrepreneurship we cover on the show.

He’s the bestselling author of several books including, The $100 Startup, Side Hustle, and The Art of Non-Conformity. On top of that, he’s hosted over 1,100 episodes of The Side Hustle School podcast.

His latest project is The Money Tree: A Story About Finding the Fortune in Your Own Backyard.

I’ve been a fan of Chris’ work for years, so it was about time we had a meeting of the side hustle minds!

Tune in to this episode to hear Chris’ take on:

Entrepreneurship Around the World

To say Chris is well-traveled would be an understatement. He’s visited every country in the world!

I asked Chris about some memorable encounters with entrepreneurs or side hustlers on his travels.

He recalled the “donut man” who would bring donuts aboard a hospital ship he was on in Liberia. Another entrepreneur was selling pancakes on the street.

Both are examples of people showing an entrepreneurial spirit, and probably earning more money than they could be doing anything else with their time in their country.

Chis said a lot of countries across the developing world have “very little formal economy.” He was constantly surprised and inspired to see people being creative and hustling with what they have available.

He also mentioned Rhet, a tuk-tuk driver he met in Cambodia. Rhet had some creative ideas to better cater to foreigners and was making three times more than an average tuk-tuk driver.

Fun fact: Chris actually wrote about Rhet in his book, The $100 Startup, and even included his phone number in the back of the book. Throughout the years he’s received numerous messages from readers who hired Rhet.

Where Do Money Making Ideas Come From?

Coming up with side hustle ideas is one of the biggest struggles that Side Hustle Nation readers and listeners tell me.

Chris said he divides this question into two types of people:

He said the coming up with ideas component is actually the easier one to solve. There are so many ideas and opportunities out there!

If you’re struggling to come up with ideas, here’s what Chris recommended.

Listen to The Side Hustle Show

On almost every episode of The Side Hustle Show, I interview someone who has built a side hustle.

You can find hundreds of ideas you can replicate or use for inspiration.

Chris called curiosity “one of the most important skills or traits you can have in life.”

Pay deliberate attention to what’s going on around you. Look for problems and pain points people have and think about how you could provide a solution.

Do a Skills Inventory

One way to generate ideas is what I call the “Piggyback Principle.” This means looking for things around you that seem to be picking up steam and finding a way to support this economy and help people involved in it.

You might also consider this finding a gold rush to sell shovels in.

Chris said one of the best examples of this right now is the rise in influencer marketing.

There’s a large ecosystem supporting influencer marketing. From production and video services to virtual assistants, there appears to be a lot of opportunity for side hustles in this space.

Podcasting is another space with potential. There are some 750k+ podcasts, but instead of starting a new podcast, ask yourself, “what do all these podcasters need?”

Maybe there is some tool that hasn’t been invented yet or some service that you can improve on that aligns with your skillset.

Give Yourself a Deadline

“When people are pressed to do something, they kind of rise to the occasion,” Chris told me.

In Chris’ new book, The Money Tree, he talks about how someone had to make $1,000 within a week. The immediate deadline and concrete goal forced them to find a way to make it happen.

He threw this question out to listeners of this episode (or you reading these notes). If you had to make $1,000 in the next week, how would you do it?

Chris said most people go from theory to practice a lot quicker than they would without any time pressure. It might push you to go forward with an idea you’ve had on the back burner for a while.

But I Don’t Have Any Skills!

“Everyone’s an expert at something,” Chris explained.

The excuse you don’t have any skills that you can transfer into a business idea didn’t wash with Chris.

He said that everyone has some skills they can use. It’s just a matter of finding out what those skills are for some people.

If you’re one of those people who aren’t sure what skills you have, Chris said to start by:

If you’re still stuck, here are some of the most in-demand freelance skills.

How Do You Narrow Down a Long List of Side Hustle Ideas?

If you’re the kind of person that can come up with a long list of ideas but need help narrowing your focus on ideas to execute on, Chris has some advice for you.

Elaborating on this, Chris said to start by asking yourself:

I do photobooth rentals for couples getting married so they and their guests can have lasting memories of their wedding.

Chris said if you don’t have good answers to these questions, you need to take another look at the idea.

How Do You Maintain Your Working Habits While Traveling so Much?

Chris is often on the road traveling for book tours and other work. I was interested in how he keeps so disciplined producing content for his blog, releasing a podcast daily, and his other projects.

“It’s something that I’ve gotten better at other time,” Chris explained, “but I think you’ll always be more productive in a stable environment.”

Chris said he is driven by outcomes and deliverables, not getting things done on a time schedule.

There are things he wants to get done daily, such as exercising and working on his podcast. But they don’t have to be done at a set time.

He’s noticed a connection between getting these things done and a sense of happiness. Chris told me everyone should try and have more days where you feel like, “today actually mattered because I made progress on something.”

Fun Fact: I created The Progress Journal to help you track exactly that!

Chris is entering the 4th year of the Side Hustle School podcast. He releases an episode every day, so that takes up a good chunk of his time.

He’s also promoting his latest book, The Money Tree, and trying to meet as many readers and listeners as he can.

Next year, on top of keeping up with his regular projects, he said he’s also going to start a new book.

“Just stop. We’re doing all kinds of stuff we don’t need to be doing. Life’s short; choose something else.”

3 thoughts on “Going to Side Hustle School with Chris Guillebeau: Planting Your Money Tree”