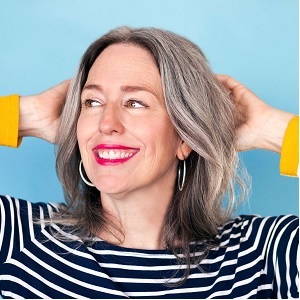 I love stories like Katie’s! In just two years, Katie Emery has grown her blog to an average of $6,000 a month in revenue.

After dying her hair for 25 years, Katie decided to go gray without regret. Still, she had questions about the transition, but couldn’t find the answers she wanted online.

(Worse, the information she found was mostly negative.)

So, she decided to start her own blog, KatieGoesPlatinum.com, to provide comprehensive information about gray hair, and to show women that growing gray could be fun and empowering.

How’d You Get the Idea to Start a Blog?

“I needed to come up with a way to make some extra money,” Katie told me.

Katie was working full-time, but her husband had been laid off, and living in California isn’t cheap.

She actually got the idea to start a blog from the book: You Are a Badass at Making Money by Jen Sincero. This book is about changing your mindset and trying new things, and a blog was something new to Katie.

Katie came up with a couple of ideas for a blog and started writing. She quickly found out, however, that unless she was really interested in the topic she couldn’t find the motivation to write more than a couple of posts.

While she was “spinning her wheels” thinking about a topic for her blog she was interested in, Katie decided to let her hair go gray. After 25 years of dying her hair, she’d had enough.

Katie had some questions about the topic of going gray and found that she couldn’t find the answers she was looking for online.

Katie did find one blog that was also about going gray gracefully called HowBourgeois.com. She’s since become a friend of the owner, Lauren Stein.

How Did You Get Your Site off the Ground?

Katie said she did some research and realized most people use WordPress to build a blog. She considers herself fairly tech-savvy, but found WordPress confusing when she tried to get to grips with it herself.

So Katie hired a WordPress tutor. She would meet with him in cafes when she had the time, and learned how to build her blog as she went along.

This also made her realize that she was going to have to pay people to do the things she didn’t know, as blogging was new to her.

Katie said that money was tight at the time and it terrified her to spend money on her site, but she saw the potential to earn money from her blog down the line.

She also paid $59 for a premium WordPress theme and paid someone to help her make some tweaks to get her site looking the way she wanted it to.

With her site all set up and looking the way she wanted, Katie wrote up her first post. She remembers it well, not just because it was her first post, but because “It took off like a shot.”

Katie then shared that post on social media and within the communities that Kim had introduced her to. It was very well received and this drove a lot of traffic to her site.

She also posted it to Pinterest, and it did well there too. So well, in fact, that within three months that post had driven enough traffic for Katie to join the premium ad company Mediavine.

That first post was what Katie calls a “transition story,” about someone transitioning from dying their hair to going gray.

She still publishes those when she finds people willing to share their stories and says they’re always popular. She’s also shared her own transition story on her blog.

Katie also publishes product reviews, but only if she’s tested the products herself. So, these can take a while to put together as she can only test so many shampoos and other hair products.

Katie also has a resource page where she shares other blogs and YouTube channels serving the gray hair community, and a salon directory to help promote salons catering to gray hair.

“The first year I was frantically creating content all the time because I was trying to drive more traffic to the site,” Katie told me.

In 2020, however, two significant things happened that had a huge positive impact on Katie’s traffic:

Up until this point, almost all of Katie’s traffic was coming from Pinterest. Seeing growth in organic traffic, she decided to start going back and fixing the SEO on older posts.

This year she’s been publishing a new post maybe once a month but says her income hasn’t gone down as a result.

Most of Katie’s traffic has come from Pinterest. If you look at her profile page, you’ll see she gets more than 2.3 million monthly viewers. This translates into a lot of visitors to her site.

Every time she publishes a new post, Katie does the following:

Katie learned how to use Pinterest by taking the Pinteresting Strategies course by Carly Campbell.

For the most part, Katie has designed all of her own pins. She did hire a designer to help out a few months ago, but as she’s been seeing a decline in traffic from Pinterest she’s gone back to creating them herself to save the expense.

Katie also uses a plugin called Grow. This is a social sharing plugin by Mediavine that makes it easy to input keywords and metadata and schedule posts across multiple social media platforms.

It also enables her to store all the pinnable images on the backend so they’re not loading on the blog post and slowing down her page speed.

What Else Is Driving Traffic for You?

Facebook is also driving thousands of visitors to Katie’s blog each month. Katie made a Facebook page for her site, but that isn’t doing too well. It’s Facebook groups she’s had success with.

The Facebook group Katie uses is called Silver Revolution. It’s grown to a huge community of around 17,000 members in just two years.

Katie actually gets a lot of ideas for posts from the topics being discussed in the group. She will check out what’s being asked, then write up a post to answer those questions.

When Katie shares that post in the group it’ll typically drive thousands of clicks to her site. As well as being shared by the community members across other groups and social media platforms.

What Are You Doing to Increase Organic Traffic?

“I’ve had a hard year with SEO,” Katie told me about improving her organic traffic.

Organic traffic currently makes up about 20% of Katie’s overall traffic, but she would like it to be her main source of traffic.

Katie said she listened to Debbie Gartner, aka “The Flooring Girl”, who appeared on episode 362 of the Side Hustle Show. Debbie said organic visitors are the most likely to spend money and stay on a page longer, as you’re solving pain points they’re Googling.

Katie took a hit in the May algorithm update and has been struggling to grow her Google traffic since then.

One of the things she’s been doing is replying to HARO (Help A Reporter Out) requests to build links. These are requests from reporters for expertise in a range of areas.

The volume of requests can become overwhelming and take some time to sort through daily. To make this process smoother, Katie has set up alerts in her Gmail to flag any requests with keywords like “hair” in them.

Katie has a YouTube channel and is aware that producing videos is good for SEO and also something a lot of her audience wants.

She hasn’t done as many videos as she would have liked though, as she says she gets nervous on camera. Katie is working on this and said a course called Video Pursuit Society by Meredith Marsh has really helped.

She has had an SEO audit on her site recently and said it recommended producing videos to complement blog posts. So, Katie has been recording some interviews in Zoom, then transcribing them using Rev.com and uploading those.

Katie monetizes her website in a few different ways:

The bulk of Katie’s revenue comes from display ads. She started with Mediavine, and recently switched to AdThrive to see if she can make the same amount of money with fewer ads.

She does get the occasional complaint about ads and understands they can be intrusive. But without using ads, she’d be working on her site almost for free.

Katie makes money by recommending products as an affiliate, both through the Amazon Associates Program and companies that reach out to her.

In addition to mentioning products in posts, Katie has set up an influencer shop on her site. This is a page where she’s pulled all her favorite products over from Amazon and essentially it looks like a store of her own.

Katie also has some print-on-demand shirts swag, such as shirts, hoodies, and phone cases. She did this after members of her community asked for branded items, a testament to how loyal her readers are.

When companies reach out to Katie to feature or review their products, she charges them a premium and also collects a commission on sales of the item.

As a ballpark figure, Katie typically charges around $1,500 for a sponsored post. She typically gets a much higher commission percentage than she does with the Amazon program, too.

One post, in particular, is currently bringing in around $1,200 per month.

How Much Time Are You Spending on the Blog?

Katie would like to make her blog her full-time business. For now, it’s still very much a side hustle for Katie.

Katie is working on creating her own product, which is taking up a lot of her time right now. She also has plans to create an ebook.

She’s finding blogging and creating websites so much fun she also has plans to start more sites if she can find the time. The main thing holding her back is finding another topic she’s passionate about.

Katie’s #1 Tip for Side Hustle Nation

“Don’t feel defeated before you even start.” 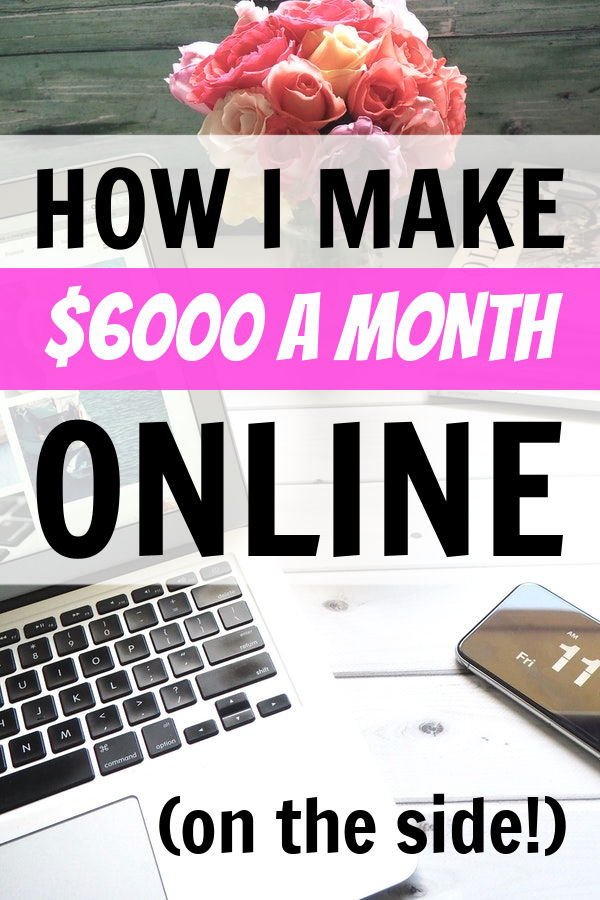 9 thoughts on “$6k a Month Blogging About Gray Hair”