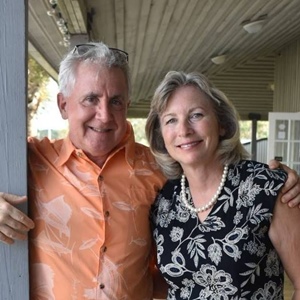 There’s profit out there, you just have to learn how to find it.

On this week’s show, I’m joined by a pair of Side Hustle Show listeners who’ve been learning that skill and have translated it into tens of thousands of dollars in sales over the last 16 months.

Jack and Joan Ferrell of SecondTimeSellers.com are resellers. They find used items at flea markets, yard sales, online auctions, and flip those items for anywhere up to 10x what they paid for them.

Inspired to start reselling after listening to episode 406 with Stacy Gallego, they’ve hit the ground running and have set the goal to sell $250,000 in the next 12 months.

The ability to find profit in your hometown is a sure-fire way to recession-proof your own income. If that appeals to you, I encourage to you check out the free Flea Market Flipper training to learn more.

Where the Idea to Start Reselling Came From

Jack told me that the idea to start reselling came from listening to episode 406 of the Side Hustle Show with Stacy Gallego.

Jack was making a 4-hour drive to Georgia and decided to listen to a few episodes of the show.

It was the episode with Stacy, who explained how she was selling up to $10,000/month worth of flea market finds, that really piqued his interest.

“I just said ‘hmm’, and I listened again, then I called Joan,” Jack told me recalling that day.

“Thriftiness has always been part of my lifestyle. I grew up in a family of five children and with my father passing away at 10, that began my life dollar to dollar living,” Joan told me.

Joan was no stranger to bartering at garage sales and flea markets or finding a bargain while shopping.

Jack is also thrifty, something that brought them together as a couple.

In fact, Joan told me that their thrifty lifestyle is what enabled them to retire early and spend more time doing the things they enjoy.

“The resale business seemed like a natural progression for us,” Joan told me.

Joan said they started out going to yard sales and flea markets looking for items they could flip for a profit.

Their first purchase was an inversion table that had never been used. Joan said they bought it for $50 and flipped it for $450.

One of their most profitable flips was about 30 days in. Jack told me he found a 5th wheel hitch from a truck for $150 and ended up selling it for $750.

That was also the first item they had to freight ship, as the buyer was in Texas.

Joan explained that generally speaking, there are bigger margins on larger items. But this creates the problem of where to store large items or large amounts of inventory.

Jack and Joan had downsized to a condo a couple of years before starting their reselling business, so they didn’t have much space at home.

They started out renting two storage lockers and were paying around $700 per month for them.

As their inventory grew and they needed more space, Joan said they found a warehouse space that was larger than the two lockers for about the same price.

On the tech side, they’re using Google Sheets to keep a record of all their inventory and add notes on how certain items were shipped, etc.

“We did find out that having contacts was a key part of the business,” Joan told me about finding inventory.

Jack and Joan got to know a number of people selling items at flea markets, and this opened a number of doors for them.

One particular gentleman they got to know invited them back to his house to look at some of his stuff.

Joan said they bought some interesting items to flip from him, some of which exceeded their expectations.

An example is some toy Trolls. Joan said they paid $100 for these dolls, and ended up flipping them for $1,500 on eBay.

Another good deal that came out of making contacts was a business owner in the warehouse complex where Jack and Joan store their inventory.

They got to know him, and when he was relocating his performance auto parts manufacturing business Jack bought a lot of the items he didn’t want to take with him.

Jack said he also likes to source items online, a few of the sites he “combs” through are:

He managed to pick up a used industrial fan from a site called Bidadoo for $26 not long before we spoke.

Jack has set up some alerts that come through from Craigslist and Offerup based on his buying criteria.

When items enter the marketplace matching his criteria, Jack gets a push notification. This saves him some time by highlighting listings that might be of interest to him.

How to Price Used Items

Joan explained that as a rule of thumb if you pick up a used item that is still being manufactured, you should aim to sell it for half of its retail price.

This really does depend on the condition of the item though. The better its condition, the higher you can list it for.

Jack said they also look at online listings to see if they can get an idea of what used items are selling for.

It’s easy to sort by items sold on eBay and look for comparable items to what you have. Alternatively, Joan said you can just perform some research using Google.

Any Negative Feedback From Sellers?

Seeing as Jack and Joan are buying items and flipping them for profit, you may think that some sellers would feel a little aggrieved that they didn’t sell their items for the higher price.

Joan said she hasn’t had any pushback from what they’re doing. Quite the opposite, in fact.

Joan shared an example where she went out to look at some van seats she wanted to purchase.

When the seller asked Joan why she wanted them, she told him that she was going to resell them.

The seller said in that case, he has some more van seats she can take a look at if she’s interested.

Joan also told me that a lot of sellers ask her to give them a valuation for various other items they have for sale when they find out she’s an experienced reseller.

Jack also shared a story where he got talking to a van conversion company that he was buying some brand new van seats from.

That company ended up referring buyers to Jack. Then those buyers resulted in Joan and Jack taking some expensive restaurant items off their hands.

Meaning, if you put your nose down and keep following a trail, you can end up finding more deals.

“We try to process items as rapidly as we can so that it’s cleaned, photographed, and put on eBay,” Jack told me.

Jack and Joan sell items locally across various marketplaces. But with eBay having the largest audience, they tend to get the best prices there.

Something Joan pointed out is that you have to do your own due diligence before buying items.

You need to make sure they’re operable or calculate how much time and money you’ll need to spend fixing items up.

An example she shared was a forklift truck they bought. After they bought the forklift, Jack and Joan realized the front forks didn’t work.

It was an old model, and as they worked on fixing it up other things kept going wrong with it. “You just never know what’s going to happen,” Joan explained.

Joan said she and Jack will always point out any potential issues with items they’re selling. Their goal is to underpromise, so the buyer is happy when they receive items.

“We rely on Big Joe quite a bit,” Jack told me.

“Big Joe” is the name for Jack and Joan’s walk-behind forklift they use to move around large or heavy items.

Jack said they also use large scales to weigh items, as shipping is often calculated on weight.

They also have lots of pallets, most of which they’ve found dumped around bins or been able to take off someone else’s hands.

Jack explained that they’ve shipped items all over the US. As long as they can get an item secured onto a pallet, Jack said they’ll ship it anywhere.

Shipping companies will come and pick up items once they’re packed up. However, Jack prefers to take them to the shipping depot himself most of the time.

“You need to maintain the momentum on sales and marketing,” Joan told me.

Jack and Joan are always thinking about making new connections and reaching a larger audience when selling items.

Surprises Along the Way

“A surprise was the amount of items out there to flip,” Jack told me.

After becoming a reseller, Jack found out that Rob “The Flea Market Flipper” Stephenson, who has been on the show twice before, lives nearby.

Jack said he may not have even pursued this business model had he known such an experienced “competitor” was so close!

But knowing what he knows now, Jack said there are more than enough items to flip and having competition nearby isn’t a bad thing.

Joan said anyone willing to step outside of their comfort zone and look for stuff to flip will be able to find more than enough items.

“The great thing about this business is that you can come into it knowing zero,” Joan told me.

“We’re trying anywhere from 3-10 times what we buy it for, depending on how much it is,” Jack told me.

Jack and Joan also bake the shipping costs into the sale price.

They use eBay to estimate  shipping costs based on the weight of the item and the zip code it’s being shipped to.

“We’re shooting for a quarter of a million in revenue,” Jack told me.

Jack’s #1 Tip for Side Hustle Nation

Joan’s #1 Tip for Side Hustle Nation

“Education is cheap compared to ignorance.”

1 thought on “$17K in the Last 30 Days: Building a Reselling Business from Scratch”