Looking for creative, unique, interesting–and most importantly–profitable side hustle ideas?

I’m always inspired by all the ways there are out there to make money. Just when I think I might have heard the strangest or most surprising side hustle ideas, something even stranger pops up. 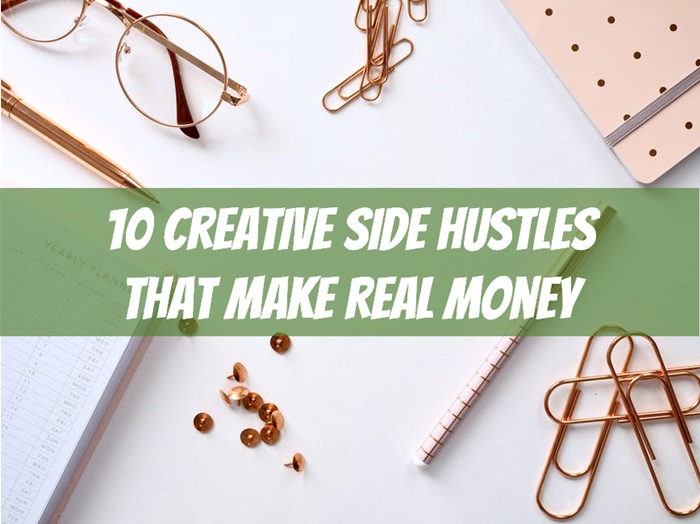 In this episode of the Side Hustle Show I’ve put together a round up of creative side hustle ideas that people have shared with me over the last couple of years.

Here are the 10 creative side hustles I cover in this episode:

Remember Brian Winch’s parking lot litter pickup business that he said was like getting paid to take a walk?

Well, the flyer distribution business is like getting paid to take a walk — and you don’t have to pick up any garbage.

This business came from a Side Hustle Show listener in Canada, who does this to the tune of $75-100 an hour, and $100k a year on the side.

He said, “My flier business is very simple, I deliver flyers door-to-door for businesses.”

The funny thing is his business started out as a result of getting a FitBit. His goal was to get 20,000 steps a day, which is about 8-10 miles, so he wanted to start a side hustle that would pay him while he walked.

He found his first customer on Kijiji (Canada’s equivalent to Craigslist). They agreed to pay him 15 cents a flyer. He agreed to deliver 1,000 that first week and decided that if he could make at least $15 an hour he would up the amount he delivered to 2,000 the next week.

That first week he averaged about 200 flyers an hour which worked out to about $25 an hour. Within a month he was up to 4,000 flyers a week for his client.

Then he got to thinking, why not deliver two flyers to each door to double his money?

He found a second business willing to also pay 15 cents a flyer. Then another business, and another, and now delivers four flyers for four separate businesses at each house during his walk which works out at about $100 an hour.

It’s not exactly a four hour work week, but $100 an hour getting the exercise he was going to do anyway is a win-win.

Mary Winchenbach of Maine has been selling homemade art featuring moose turds for over a decade.

She says the most popular item is the “poopoo clock” (which she explains has turds placed between the numbers to indicate “one-turdy, two-turdy” and so on).

It was a side hustle for Mary until her story went viral this fall and her Etsy shop exploded with orders.

She has now quit her full-time job and focuses on Tirdy Works full-time now. “An opportunity like this comes along once in a lifetime,” she told the Portland Press Herald. “I’ve worked my whole life. If I fail at this, I’ll find work. I just have to give this a shot.”

Not a bad business when your signature raw material is free.

Related: How to Become a Freelance Artist

Related: How to Sell Printables on Etsy

Mike Rigby of Utah has been selling tumbleweeds online for 10 years.

He told Fox 13 Salt Lake City the idea came from watching TV. “I’m there watching Jay Leno, and there was stuff sold on eBay, and one of the things was a tumbleweed. I thought it was a total joke,” he said of selling tumbleweeds. “I couldn’t believe why anybody would ever buy one.”

Today Mike and his wife run CuriousCountryCreations.com as a full-time business. Their signature item, the native Utah tumbleweed, comes in sizes ranging from “baby” to “ginormous” and sells for up to $75 apiece.

BabyQuip.com presents a compelling alternative to getting rid of baby stuff as soon as you’re done with it — which has been our strategy so far!

The platform connects parents with traveling families or grandparents who live in town and need a crib and a stroller for a few days.

They are now operating in 300+ markets in North America and have hundreds of customer reviews. One example the company sent me was a provider at Lake Tahoe. He’s got cribs, strollers, hiking backpacks, toys, beach chairs, and more, and lots of glowing customer reviews.

Almost everything is priced from $10-30 a day, with discounts for longer term rentals.

I came across an article on DumbPassiveIncome.com, where the guest author described his low risk, low overhead Airbnb model.

The basic process was to do a lot of research upfront on which properties were consistently booked on Airbnb for high dollar amounts and comparing those to active traditional rental listings.

Then the author of the post, Mike Xave, would approach the landlord, being upfront about his intentions to sublease the property on Airbnb, and negotiate a standard 12-month lease.

That meant he didn’t need a 20% down payment, so he was able to get in the game much more affordably and with much less risk. Then he studied the best performing Airbnb listings and set out to match those in terms of their pictures and descriptions.

He described that a home that rents long-term for $2k a month, If he did the research tight, could command up to $6k a month in the short-term market on Airbnb. In 3 months, Mike quit his job to live off this cash flow spread and grow the business.

Note: I’ve also heard of people doing this with the peer-to-peer car rental site Turo.com. As in lease a car of SUV for $250 a month, and turn around and rent it out on the platform, profiting on the spread.

For Sam Varnerin of Boston, snuggling has turned into a serious business. She told Student Loan Hero, “I work around 18 hours a week, charging between $80 and $100 an hour, and make between $3-4k a month.”

Sam actually first heard of the business through Side Hustle Show guest, Jason Zook, and thought it was a joke. When she found out it was a real thing and that people paid real money for it like therapy, she thought she’d be good at it and it would be a good way to pay off debt.

Sam started part-time through the SnuggleBuddies.com agency, which allowed her to earn $40 an hour on her own schedule. She eventually created her own website, SunggleWithSam.com to pursue the business full-time.

Robert Samuel is the founder of SameOleLineDudes.com, a service that will provide someone to wait in line for you in New York.

The business started when the iPhone 5s was coming out. Sensing there would be a lot of demand for the new device, he posted an ad on Craigslist and offered to wait in line for someone’s phone.

According to EliteDaily, he once made $14k in one day waiting for iPhones, and now manages a team of 20-30 who help him wait in line for his clients. The typical rate is $45 for the first 2 hours, then $10 for every additional half hour.

Robert said that most of his customers are tourists who’d rather spend their time seeing the city they came to visit than waiting in line. Makes sense to me!

Maury McCoy runs PennyPortrait.com, where you can buy a poster of Abraham Lincoln and glue different color pennies to it to make a cool-looking patriotic piece of art, that Maury jokes is worth at least $8.46.

He got the idea when he saw an article about a father and son who created a giant portrait of Abe Lincoln out of pennies. Their image was much larger and they used two shades of pennies.

Maury thought other parents and kids might enjoy a project like this and went about creating an improved, easier to assemble version on his computer. He used four shades of pennies, and was able to decrease the size of the image to require 846 pennies, which seemed more manageable.

So far, he’s sold more than 5,000 of these things at $20 each, through his website, Amazon, and now in the gift shops of the US Mints across the country.

Side Hustle Show guest Bryan Orr shared a viral image of a man crying alongside his price list to come mourn at a funeral. His rates started with normal crying for $50, and going all the way up to crying and actually jumping in the grave for $1000. 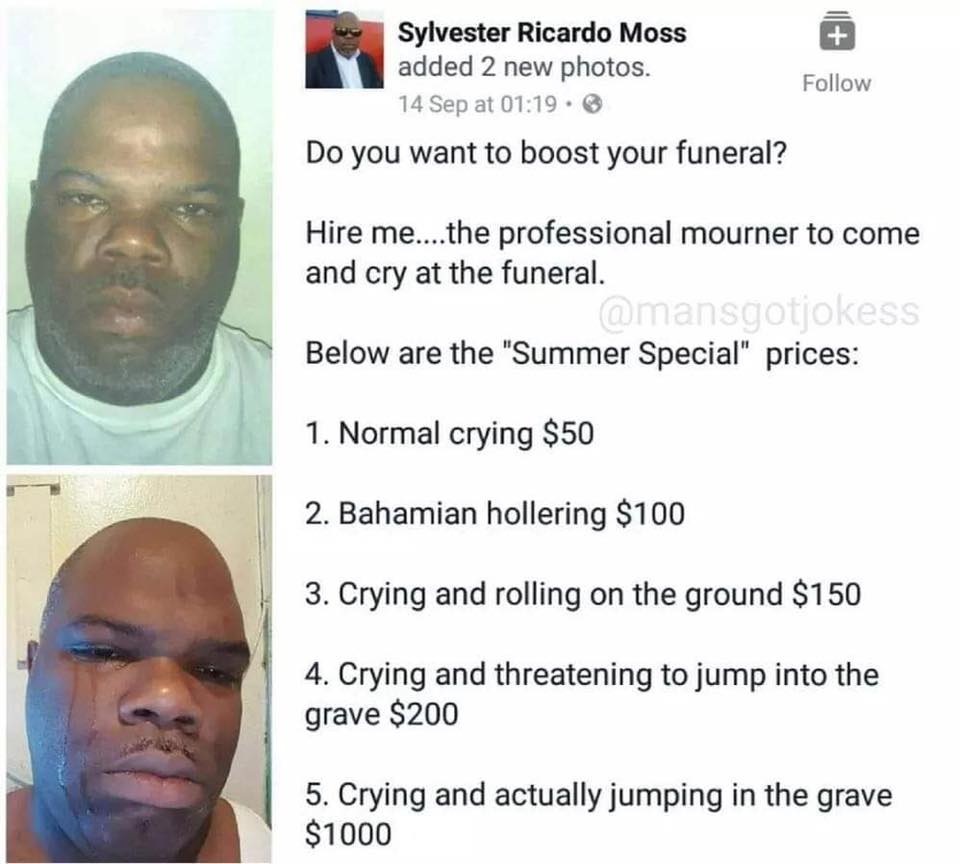 It turns out that the services offered by the gentleman on Facebook was a joke. But in my research, I found that paid funeral mourners ARE a real thing, and the tradition dates back thousands of years.

Professional mourner Owen Vaughn of London explained the gig is very much an acting job. You need to do a character study in advance, be able to trigger sadness on demand, and be able to play to the expectations of the people who hired you.

Families may hire people like Owen to avoid embarrassingly low attendance, or to make a deceased relative seem more important or popular. It’s his job to assume a fake identify and make everyone else there believe he’s someone who truly cared about the deceased.

That doesn’t sound like an easy gig to me, but according to JobMonkey.com, paid mourners can earn $30 to $120 per funeral. There’s even a service in the UK where you can hire grieving actors at RentAMourner.co.uk

The WeCroak app is a simple smartphone app that reminds users 5 times a day that they’re going to die. This is based on a Bhutanese folk saying that “to be a happy person, one must contemplate death five times daily.”

It was developed as a side hustle by Hansa Bergwall and Ian Thomas, and I’m estimating it has sold tens of thousands of copies at $0.99.

The concept is similar to the Stoic “Memento Mori” – Latin for “remember, you will die” or “remember death.”

Related: If you want to turn your phone into a money maker, check out our list of apps that pay you. 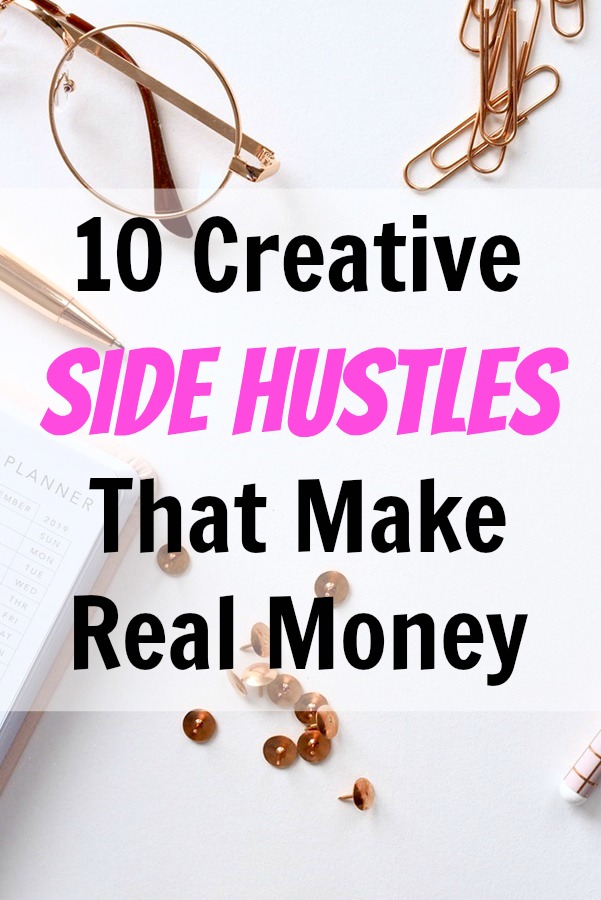