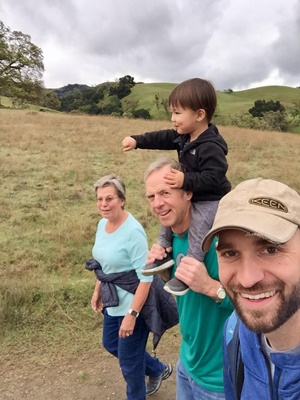 In honor of father’s day, I wanted to share some of the best advice I’ve received from my dad over the years, and how we can all work to apply it in life and in business.

For the sake of background, dad is a chemical engineer — he spent decades of his career at one company — but still had lots of entrepreneurial experiences and insights along the way.

The funny thing is almost all of these were very literal conversations, which I’ve extrapolated out (30 years later!) to have a broader meaning.

And as I think about the kind of advice I want to be passing along to my own kids, I think these kinds of concrete illustrations may be a really effective way to do it. Especially if they turn out to be the over-analyzing types like me!

This is something dad would say as we were working on home improvement projects when I was kid.

What he meant by that was it doesn’t have to be 100% perfect — which isn’t to say he didn’t care about quality — just that sometimes it’s better to finish the job than the stress over every last detail.

Perfectionism is definitely something I struggle with so I try and keep this in mind and apply to my work today.

In startup-speak, this is the idea of the MVP — the minimum viable product. Reid Hoffman of LinkedIn put it this way:

“If you’re not embarrassed by the first version of your product, you launched too late.”

If you wait to launch your service, your website, your YouTube channel, or podcast until it’s perfect, you’ll probably never get it out there.

The first versions of most of my projects were pretty awful looking, to the point I was actually pretty embarrassed to share them, which is why that Reid Hoffman quote rings so true. But they were functional.

Remember, it’s not a piano. For most things in life, good enough is good enough.

2. You Can Figure It Out

I mentioned that dad was an engineer, a career path that neither my brother nor I followed, but some of that still managed to rub off.

Particularly, he encouraged us to be curious about how stuff worked, was really methodical in a lot of processes and chores, and made sure to let us know whenever we were stuck that we could figure it out.

He was big into the Socratic method, or basically teaching by asking increasingly more difficult questions, and letting your reach the answer on your own.

Everything is learnable. Be resourceful, be curious. The answers are out there — they might not be easy to find — but you can figure it out.

There’s a reason a lot of episodes here focus on “reverse engineering” successful businesses, or trying to deconstruct the processes that worked for other entrepreneurs. If we can take something complicated, and break it down into simpler steps, then we’re far more likely to move forward.

This was very literal advice: “Look, I’ll help you with your homework, but sharpen your pencil. You can’t do good work with a dull pencil!”

Interpreted a little more broadly, this was dad’s way of saying the tools you work with matter. Respect them, and respect your work. Don’t make things harder than they have to be.

In your business, do a tools audit. Are the products and software you’re using today, the best fit for the job? Are there some dull pencils in there?

And why a pencil and not a pen? Because it’s OK to make mistakes and erase. :)

4. Do Work You’re Excited About

After college, I took a job with Ford that moved me from Washington state to Washington DC.

I took the gig for a couple reasons:

To dad’s credit, he questioned the move. “You don’t really care about cars, why do you want to go work at a car company? You’re going to spend a big chunk of your waking hours at work, so doesn’t it make sense to do work you’re excited about?”

That has stuck with me, and in all my side projects that have found success, there was some level of interest or excitement that kept me going.

This lesson comes from the often foggy and soggy ski slopes of Snoqualmie Pass. After each spectacular yard sale wipe out, dad would offer his encouragement:

“You know what they say — ‘if you’re not falling, you’re not getting any better.’”

This is the call to do work that challenges you, knowing you might fail. Yes, you can probably stay on the bunny slope and never crash, but there’s the whole rest of the mountain to explore!

With each crash or with each failure comes a learning moment. Well that didn’t work! I’ll try a different approach next time.

I know I will continue to fall, because the challenge of trying new things is part of what makes business fun.

The second part of this attitude of failure being an essential part of growth is a recognition that injuries are (usually) temporary. “It’ll grow back” is dad’s go-to consolation for the scrapes, cuts, and bruises collected along the way.

6. “You’re Really Only Racing Against Yourself”

I was on the swim team for several years growing up, and early on, it was discouraging to be among the slowest in the pool.

Dad’s advice was to ignore the other racers. If you can beat your time from before, you’re getting better, and that’s a win — no matter what happens in the other lanes.

This was helpful for me and something I applied in the pool and in lots of other areas.

This is the slight edge habit, the idea of getting a little bit better every day. Over time, those tiny, immeasurable improvements lead to exponential gains.

But even to race against yourself, you’ve got to have a baseline or a starting point to race against. That goes back to “it’s not a piano” and not letting perfection stand in the way of getting started.

7. Until You Try and Sell It, You’ll Never Know

I remember getting all excited checking the Beckett price guide and learning some of my baseball cards were “worth” $10 or $20 or more. Dad argued that those prized pieces of cardboard were really only worth that much if I could find a buyer willing to pay that price.

I didn’t love hearing that at the time, but that little dose of truth was good for me to hear.

(Selling baseball cards at the end of the driveway was one of the business ideas I tried as a kid.)

In terms of your side hustle, this one is about validating your idea with real customers. Ask someone to buy — that’s the only real validation.

Until you find a buyer, it’s just an idea.

This was another very literal piece of advice from when we were camping. At night, I’d run to get the flashlight — but dad would stop me: “You don’t need a flashlight; your eyes will adjust!”

Come on! After playing with fire and pocket knives, flashlights were the next best thing about camping for a kid.

But he was right. If you give it time, you can see pretty well in the dark.

This is one I definitely carried with me, because the first time I went camping with my wife I pulled the same line on her — “You don’t need a flashlight, your eyes will adjust!”

But to vastly over-analyze this, I interpret it as a call to be happy with what you’ve got. You probably don’t need the next shiny thing. Give it time; your eyes will adjust.

And always grabbing for the proverbial flashlight, can be dangerous and expensive. It’s the easy way out.

Maybe you’ve heard the theory of Hedonic adaptation, which to summarize is a luxury once experienced becomes a necessity. We become accustomed to certain things, and it’s hard to go back the other way. And what was once a luxury is now your new normal, which can have you chasing the next level, the bigger house, the fancier car.

Maybe “your eyes will adjust” is a call to avoid lifestyle creep, to stop buying stuff because you can afford it, without questioning whether or not you really need or want it.

9. Rip Off That Band-Aid / Rip Out That Tooth

The story behind this one is dad was sick of me constantly playing with a loose tooth. He grabbed his needle-nose pliers, took me out on the deck, and proceeded to extract the tooth by force.

(It must have just been hanging on by a thread because I didn’t feel a thing.)

This is the take action lesson. The call to do the thing you’ve been putting off.

The obstacle is the way, right? It’s probably not as scary as you’re making it out to be, and you might as well get it over with.

I’ve had to rip out that proverbial tooth several times over the years, from knocking on my first door cold calling, posting job ads for help in my businesses, and hitting record on that first podcast.

If there’s a wiggly tooth in your life that’s driving you and everyone around you crazy, maybe it’s time to grab the pliers.

One time when my brother and I were teenagers, we were camping in Oregon. Pulling out of the campground, dad backed our minivan into another car that was parked behind him.

He was frustrated with his mistake–this being in the days before backup sensors–and the repair was going to cost a few hundred dollars.

Still, he took the attitude that “it’s only money” and “you can’t take it with you.” That stuck with me.

Money isn’t a finite resource like time; you can always make more.

That was a good perspective to see, because I was always very money-motivated as a kid. It seemed like this scarce, hard-to-get thing, and in some ways it still feels that way, but this was a good illustration of money not being the end goal.

Your Life is Your Lecture: Lead By Example

Hey, this is Nick’s brother Chris. I write at nwtutoring.com and becomingbetter.org.

These are all great bits of advice, but the most important things Dad has ever taught me weren’t expressed with words at all. He leads by example, which is the single most powerful thing parents can do to influence their children.

For instance, if we went to someone’s house for dinner, Dad would always do the dishes. He never told me this was the right thing to do; he just did it. And then I was at a dinner party in college, and I found myself automatically getting up to do the dishes, and I realized that I was becoming my father.

The power of leading by example extends far beyond parenting, too.

It’s essential for influencers and leaders of all kinds. In sales, they teach you to “buy your own product.” And if you’re in the business of giving advice, you’d better be following your own advice. As Oliver Goldsmith said, “You can preach a better sermon with your life than with your lips.”

What kind of dad-isms did you grow up with? How have those stuck with you over the years?