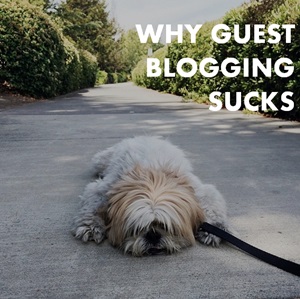 The conventional wisdom when starting a blog is to “get the word out” by guest posting on established higher traffic sites.

It makes sense, right? They’ve already got the readership and eyeballs you’re after, so why not go directly to the source and try and siphon off some of their audience to become your audience.

You can blog on your own no-name site until you’re blue in the face Field-of-Dreams-style, hoping if you build it someone will come, or you can go out and write for sites that already have traffic.

It all sounds great, and that’s why the chorus of blog blog-building experts all recommend guest posting, but there’s a problem.

It takes a ton of time — and may not be all that effective.

Each of those phases takes time, and in some cases, a lot of it. Which in itself isn’t horrible, because most things worth doing take time, but the worst part is the results from guest posting can be erratic and unpredictable.

If the goal of guest posting is to drive traffic and conversions back to your site, the results can be hit or miss depending entirely on how the host wants to give you attribution for your article.

If they don’t introduce you properly at the top of the article, many readers may not even know it IS a guest post and won’t even think to click back.

Sure, guest posting does still work when done right, but let’s not parade it around like the holy grail of blog marketing strategies.

As with most tactics, there’s an 80/20 rule to be applied. A narrow segment of the guest spots I’ve earned have driven the vast majority of results, but the challenge is you don’t know which sites and posts will perform so you have to spend time casting a wide net.

3 Things You Should Do Instead

Consider Dollar Shave Club. Did they worry about guest posting to drive traffic? They made a funny video that was cooler than any other razor commercial ever made. Plus they had an innovative way to sell the product with a subscription model that combined with the viral video to be something remarkable that people shared.

In 2012, John Lee Dumas launched a revolutionary 7-day a week podcast. Because no one else had attempted such a thing before, it earned John a lot of attention. Or Pat Flynn sharing his monthly income down to the penny. It was (and still is) a remarkable level of transparency.

See, they all just got mentioned here without having to write a guest post. When you do something remarkable, other people spread your story for you.

This also explains the popularity of Mr. Money Mustache, because well, his story of retiring at 30 is pretty remarkable.

Two of my post popular podcast episodes follow a similar pattern. The first is the story of AnarchoFighter, the Fiverr super-seller who made enough money in his first year on Fiverr to buy a house. Then there’s Ryan Finlay, who earns a full-time living and supports his family of 7 buying and selling items (mostly appliances) on Craigslist. Remarkable, right?

When California lawmakers passed a law forcing out of state retailers to collect California sales tax if they had online affiliates in the state, most big stores like Amazon and Overstock reacted by simply “firing” their California affiliates. At the time, my business was 100% reliant on these relationships, so I literally packed up shop, rented an apartment in Nevada, and set up a new corporation there.

The press was interested in these kinds of unintended consequences of the law, so my story got picked up in the San Francisco Chronicle and the New York Times.

Think of Matt Giovanisci, and his pool care rap video. It’s been viewed nearly 18,000 times, which earned Matt a ton of recognition in the industry and translated into thousands of dollars in ad sales!

Or how Steph Halligan began creating comics about personal finance.

There are ways to be remarkable in any industry.

Do something remarkable, and tell people about it.

Guest-podcasting has several advantages over guest-posting.

First of all, it’s much faster. I’ll gladly trade 30 minutes on an action-packed Skype call with another podcast host rather than write 1000 well-crafted words for their blog.

Second, it’s a higher level of engagement. Podcast listeners just spent 30 minutes with you in their earbuds, instead of 2 minutes and 30 seconds skimming a blog post. When they visit your site it is with intent and purpose. It’s more highly qualified traffic.

Third, there’s an SEO benefit. Most hosts maintain a website where they post their show notes and collect email addresses. Nine times out of ten you’ll get a link from that website without having to write another killer article, which is not a bad trade for half an hour of your time.

And finally, you don’t need to be 100% original. You wouldn’t dream of posting the same article on multiple websites for fear of duplicate content penalties with Google, but you can tell the same story on multiple podcasts.

So how do you land guest spots?

By reaching out to the hosts! Don’t think of this as self-promotional or spammy. Podcast hosts have a content calendar they’ve committed to and NEED high quality guests to keep the show running. The more frequently they publish episodes, the more great guests they need.

As a podcast host, getting quality guest pitches actually makes my life easier because it’s one less spot on the calendar I have to worry about filling. But there’s a right way and a wrong way to go about this, so let me share a couple good examples followed by one bad one.

Here’s a cold email I got from Kimanzi Constable, who now co-hosts Starve the Doubts with Jared Easley. 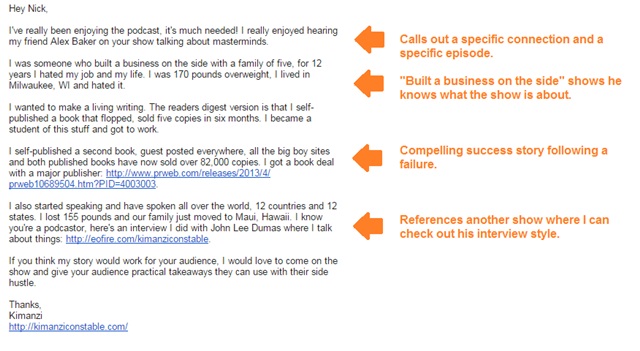 And here’s one I got from Dan Faggella of CLV Boost: 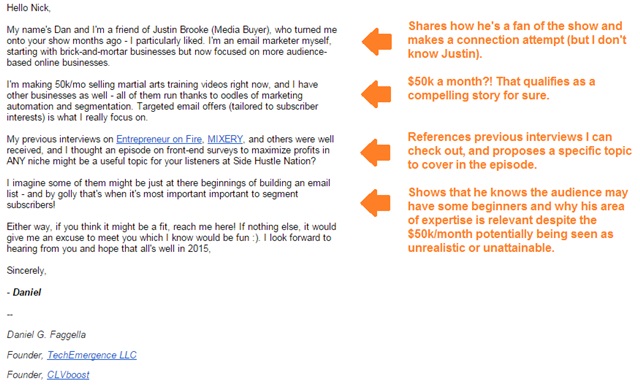 With both Dan and Kimanzi, I checked out their previous interviews, liked what they had to say, and crafted a show outline that would serve my audience and allow them to share their unique expertise.

The shows both turned out great and I was thankful they reached out to me! (Ironically both shows talk about the incredible power of guest posting.)

Here are some common threads of pitches that get my attention:

Now on the flip side, I get my share of bad pitches too, so let me share an example of those.

In this case, the pitch is almost entirely self-promotional. The interviewee, Tony, has his assistant pitching on his behalf. It’s obvious she has no idea what the show is about and is just shotgunning out these cold emails hoping to get a bite.

And while she does at least address her email to “Nick” (that’s a good start!), she doesn’t provide any connection we may have in common (LinkedIn is perfect for this, as are shared Facebook groups), any compelling “hook” for aspiring and part-time entrepreneurs, or any link I can follow to learn more about Tony.

Do your homework. Especially if the host doesn’t provide any proposed questions or talking points in advance, it’s on YOU to research their show’s style and steer the conversation in a way that serves their audience.

Side Note: You could consider starting a show of your own. I’ve found it to be a more effective growth channel than blogging.

Side Note: Yes, I’m aware I’m probably setting myself up for a new barrage of pitches. Make ’em good!

Remember, the goal of your site is probably NOT to watch your analytics numbers climb, but it’s actually to make money, right?

And I don’t mean “helping people” in the generic sense that by posting useful content you can check the “helping people” box. I mean like reaching out to actual individuals, one-to-one, and doing something that helps them. 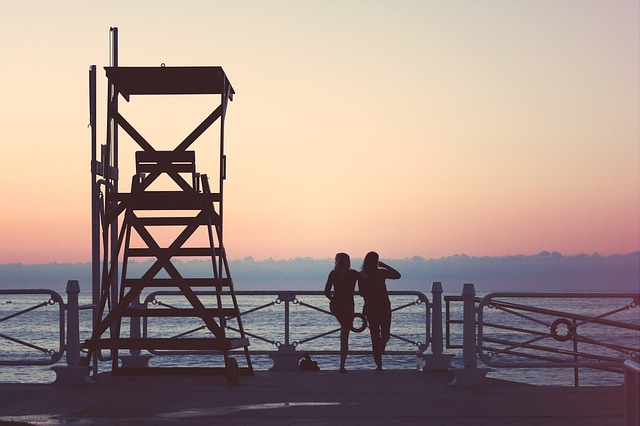 Derek Halpern may be the most well-known example of this. When he was starting SocialTriggers, he actually did personal audits of well-known sites on opportunities to improve their conversion. Free of charge.

Once people implemented his free suggestions, AND saw results, they were fans for life and couldn’t help but refer others to Derek and his site.

Another way to look at this is through the lens of your Dream 100 clients.

This concept comes from the book, The Ultimate Sales Machine by Chet Holmes. The idea is to come up with a list of 100 individuals or companies you’d LOVE to work with, and relentlessly pursue their business until they agree.

Chet argues the best way to do this is to become a conveyor of indispensable value. That could be following a similar strategy to Derek, putting together a personalized industry report, or doing some kind of free training.

Consider how Bryan Harris launched VideoFruit. It was a variation on the Dream 100 strategy, but as a solo entrepreneur looking to build enough income to quit his day job, he needed nowhere near 100 clients. Just a handful would suffice.

So he created individualized product samples, video infographics in this case, to his dream clients like KissMetrics and Hubspot. He gave them away completely free in the hopes of blowing them away with quality and have them begging for more. And it worked.

It’s the same reason Costco gives you free samples; because it works.

The biggest challenge here is identifying a single customer to target at a time, instead of blogging for the masses. Providing massive value upfront to ONE person or company is tough to ignore. This can be applied in virtually any industry and is a proven way to turn prospects into paying customers.

And now that you’re helping people, and they’re seeing positive results and paying you, you have a remarkable story to share on your site and on podcasts, and the cycle continues to spin.

Have you been disappointed with your returns on guest posting?

But the definition of insanity is continuing to do the same thing and expecting different results.

It’s time to change things up and try a few new strategies. Can you apply any or all of these in your business? What’s your next move?