Is your income active or passive?

If you’re wondering what’s the difference and which is better, you’re in the right place.

What is Active Income?

Active income is the money you earn as a direct result of the work you put in. This is most common form of income, and frequently earned by “trading time for money.”

In fact, for most people, active income from a job is their only income.

That’s a risky position to be in.

No matter how you have it structured, whether you’re hourly or on salary, whether you’ve “productized” your service or not, you’re still trading hours for dollars. (Unless you have a team in place behind you to deliver the work.)

What is Passive Income?

Passive income is the money you earn from assets you control. Those could be earnings from rental real estate, profits from a business you own, or sales of products.

Passive income is naturally attractive because it doesn’t require your direct involvement — at the time of its earning — to get paid.

To be sure, there is often a BIG upfront investment in time and/or dollars to build or acquire a passive-income-earning asset. That’s the active-income opportunity cost; you could have spent that time earning money NOW, but instead you speculatively spent it in the hopes of earning more later.

I was listening to a podcast last month, and the question came up of how much of your time is spent in “reactive mode” vs. “proactive mode.”

That really hit home since it’s something I’ve definitely wrestled with, and a challenge I believe all side hustlers are faced with.

A few years ago, I found myself in “reactive” mode quite a bit, delivering work for clients, answering email, fulfilling other people’s demands on my time. And all that was totally fine, because it paid.

And it left me without much leftover time to pursue “proactive” projects — like writing a new book, creating a course, or building a new website.

When you audit your time, where are your hours going? Are you working on active income or passive income activities?

With Limited Time, What Should I Work On?

If you have limited time, how should you prioritize your projects? Should you focus solely on building active income streams, to ring the cash register immediately?

Or should you focus entirely on building passive income assets? If you’re side hustling, after all, you could rely on your day job to pay the bills.

The Case for Active Income

I think the answer will depend on everyone’s unique situation. If you need to see money coming in right away, an active income strategy is the way to go.

In fact, for most people starting out, an active-income approach is probably the fastest path to getting out of debt, building a financial cushion, and improving their balance sheets.

Most active income side hustles don’t require a huge upfront monetary investment, and you can begin to see the returns right away.

For example, Harry Campbell explained he was earning his first ridesharing fares within a week of applying to be a driver.

I got an email a few weeks ago from another listener who said he made $300 in his first weekend of buying and selling on Craigslist.

It’s rewarding and empowering to begin earning those first dollars outside of your day job!

What type of service could you offer?

How Active Income Can Lead to Passive Income

The crazy thing is, active income often leads the way to passive income. Here are just a couple examples.

Mechanical engineer Matt Bochnak was always tinkering in his garage with motorcycles—his own and his friends’. One day, he wondered if anyone would pay for his repair service, and sure enough, his ad on Craigslist started to draw in new customers.

The other smart thing Matt did was set up a camera to film himself doing the repairs, which has led to a profitable YouTube channel and even selling full repair walkthrough video files online, effectively turning a service business into a passive income business.

My friend Wes “The Sales Whisperer” Schaeffer introduced me to an interesting way to set a service business up for passive income.

Wes helps teams streamline their sales processes, systems, and workflows. What that often involves is setting clients up with new customer relationship management software, especially when their existing system is outdated (or non-existent). With years of sales experience across dozens of industries, Wes has the knowledge to recommend the best tools for each business.

Passive income comes into play because Wes has affiliate or reseller relationships with many of the services and software tools he recommends. He earns his sales consulting fee upfront and then earns residual income from referring a new customer to a particular software that’s helpful in their business.

Over the years, this “passive” element of Wes’s business has become a substantial income stream. And it all just came from setting up clients with someone else’s products and showing them how those products could bring them more sales.

The Case for Chasing Passive Income

The trouble with a completely reactive or “active income” strategy is the hustle can never stop, or the income dries up. Eventually you’d like to have some of your money working for you, to give yourself a little breathing room.

Like Warren Buffet said, “If you don’t find a way to make money while you sleep, you will work until you die.”

So if you’ve already been side hustling for a while, or are in a strong enough position financially, I think it makes sense to start chasing passive income. Or at least build a little “proactive” time into your allocated side hustle hours.

Maybe that’s investing in extra income streams, or maybe that’s in building an asset of your own like a website, book, or course.

Finding a Balance Between Active and Passive Income

Like any “spec” work, work you do on speculation, there’s a chance you’ll never get paid — dropping your hourly rate for that project to a big fat $0.

In some ways, it’s a chicken vs. the egg dilemma; it almost takes some level of passive income to free up your time to work on developing more. And if you don’t carve out any passive income time, you might never get it.

One way around it is to raise your rates to a level where you don’t need to be hustling up active income ALL the time.

I think 75/25 active/passive is a good split for beginning side hustlers, but over time, you’ll want to shift the focus more toward passive income.

Over the years, I’ve been all over the map on this one. For a while, my time was probably split 75/25 between active income/passive income activities. Then it would flip the other direction as business conditions changed, and then flip back.

Of the 15 income streams I’m working on now, all but one are relatively passive — it’s just a matter of growing them.

The active income from a few years ago included freelancing, website audits, writing sponsored posts, hosting mastermind groups, and coaching and consulting. Today, I’ve pared down almost all of that, and only take a handful of consulting calls.

The other thing that’s important to note is the “size” of the pie is much bigger today as well — more than 3x as big! Would I have been able to achieve that growth focusing on active income? Probably not.

But starting out, all my income was active — in the form of my day job salary! These “passive” income streams took months and years to build and grow.

And even though the vast majority of my time and income falls into the “passive” category today, I’m still working every week to maintain and grow those streams!

Where do you start? Here are some passive income ideas to consider.

How much of your day is spent in reactive vs. proactive mode?

Let me know in the comments below! 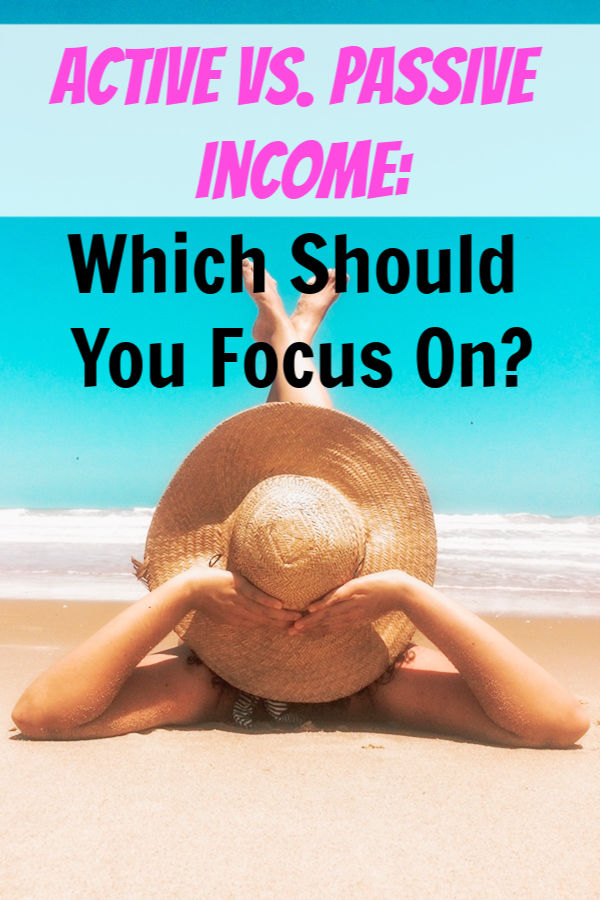 37 thoughts on “Active vs. Passive Income: With Limited Time, Which Should You Focus On?”