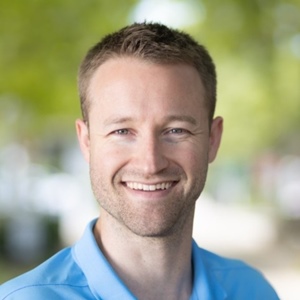 “There is no plan B, I’m going to make this work.”

That’s the kind of determination that is often the difference between success and failure, and this week’s guest is a perfect example of that.

In this episode, you’ll meet Brien Gearin, a side hustler who battled through 11 months of not getting a single client.

However, during those 11 months, Brien was learning new skills and growing as an entrepreneur. Since then, he’s grown his digital marketing agency into a full-time 6-figure business.

Today, customers are happy to pay Brien and his agency RicochetDM.com $1500 a month and up to spearhead their online marketing efforts.

The Idea to Start a Marketing Agency

The idea to start a marketing agency was really born out of necessity, Brien explained.

“I was working a full-time job in sales/marketing and necessity came around. It was like, I need to get into something – I need to be an entrepreneur if I’m going to be happy,” Brien told me.

Brien said he knew he wanted to start a digital business on the side from his day job. This was going to be the best way to build up a business slowly with minimal overhead while learning new skills.

There was a point where “the stars aligned,” Brien told me.

Brien had just finished a comprehensive digital marketing course for his day job. Part of this course was learning how to run Facebook Ads. To put students to the test in a live case study, the 5,000 students had to run Facebook ads to promote the course.

Brien’s ad campaign was one of the top 5 performing campaigns. This was when he realized that not only could he successfully run Facebook ad campaigns for clients, but he enjoyed doing it.

Shortly after that, he saw the friend of a financial blogger he was following was releasing a Facebook ads course.

This friend was called Bobby Hoyt, and along with Mike Yanda, they’d created a course called The Facebook Side Hustle Course.

This course takes students through the steps of starting their own side hustle and earning $1,000-2,000 per month learning various digital marketing skills.

Brien said Bobby and Mike are still his mentors to this day. He credits them with teaching him everything he knows from how to run Facebook ads to building and operating his agency.

“It was a long journey, to be honest with you, from the time that I started the course until actually landing a client was about 11 months,” Brien told me.

Brien said it took this long because although he had the skills to run successful ad campaigns for clients, he had to learn how to sell and bring clients onboard.

When I asked Brien why he didn’t give up during those 11 months, he had some powerful words:

Brien got his first client by using the “LinkedIn method.”

This method involves turning your LinkedIn profile into a sales page, then using LinkedIn Sales Navigator to reach out to prospective clients and engage them via LinkedIn messenger.

Brien would send out messages introducing himself, and explaining that he’s looking to build out his professional network.

When someone adds Brien as a connection, a couple of days later he sends them a message thanking them and also asks them a question.

Not a salesy question, something like asking what kind of lead gen they’re currently using.

When they reply, Brien would then suggest a different lead gen method or offer some advice on how they can improve their lead gen. Anything to provide value and get the conversation rolling.

This was exactly how Brien landed his first client, a local real estate agent where he lives.

This was huge for Brien, he said it helped get him “over that hump” and made him realize he can sell his service.

Brien said posting content on LinkedIn has also worked well for him. If you’re posting valuable content, all the people you’ve added as connections will see your content in their feed, Brien explained.

Networking in Person and Joining the Chamber of Commerce

After landing his first client through LinkedIn, Brien said the best method of client acquisition came from joining his local Chamber of Commerce.

Brien is more comfortable going out and meeting people in person. He finds it easier to build trust, explain his services, and tailor what he’s offering over a conversation.

The President of his local Chamber of Commerce said they’re always being asked questions about running ads, and asked Brien if he would do a lunch and learn presentation.

Brien said 15 people turned up for lunch. He booked 8 meetings and 4 of those turned into clients.

“When I first started out, I started a little lower just to build my confidence,” Brien told me.

As for his current pricing, Brien said it varies depending on a client’s individual needs as he offers flexible plans.

However, as a general ballpark figure for Facebook and Instagram ads, Brien said he charges $1,500 per month.

(Clients also pay for their ad spend on top of this.)

Brien has recently added more areas of expertise to his services. He now has someone managing email marketing and Google ads for his clients.

Clients have the ability to choose any number of platforms to advertise on, as well as how much they want to spend.

Brien said he felt a lot of pressure to niche down when starting out.

What Brien found, however, was that by going too niche he really limited his options in terms of the number of clients with a budget for ad spend.

Struggling to get traction only targeting real estate businesses, Brien said he knew his skills would transfer over into other niches.

“I decided to be industry agnostic,” Brien said.

What ended up happening was that a niche found Brien. Brien said his agency started getting great results working with breweries and event centers.

Brien has developed a system that’s been working well generating leads for weddings in the event center, while handling the brewery marketing as part of the overall event.

Other Marketing Tactics That Have Worked

Brien has run Facebook ads for himself, but he’s seen better results through his referral network.

Brien said this is because referral leads are warmer than leads from Facebook ads.

When someone refers a client to Brien he sends them a $250 check or gift cards as a thank you.

Brien said he has great client retention numbers and his longest paying client has been with him for 4 years.

Brien said his goal is always to form a long-term relationship with his clients as it’s a win-win for both him and his clients.

He said that his role is helping his clients grow their businesses, so if he’s doing that it makes sense for them to stick with him.

Brien also has a background in customer service within some of the roles he’s worked previously.

So, he understands the importance of delivering a good service and how going the extra mile can really pay off.

Brien said he prides himself on making himself accessible to clients and establishing good communication, and he even sends out birthday gifts to his clients.

That was back in early 2020. Brien said he was at the point where he had hit his target of $6,000 per month, and he was spending more time working on his agency than his day job.

Brien said it was the best decision for him and his business as it allowed him to spend even more time working on his business.

“That was a huge catalyst to my business spiking,” Brien told me.

Many freelancers fall into the trap of selling their own expertise and having to work with each client on a 1-to-1 basis which prevents them from scaling.

Brien is the face of his brand and he likes making personal connections with clients, but he’s built his business in a way as to avoid his pitfall.

One way he’s avoided this is by taking on some team members to help with the fulfillment side of his business. Things like writing copy, incorporating images, tracking performance metrics, etc.

This allows Brien to spend his time on the business development and client relations side of his business.

This means Brien is the person his clients are talking to, but the day-to-day work is being carried out by his team.

Brien acknowledges that the day will come when he’s not able to have that personal connection with every single client.

He’s willing to start delegating client relations to his staff when the time comes.

The main tool Brien said is pivotal to running his business is Zapier.

He uses Zapier to do things like collect data from Facebook and drop it into Google Docs, send messages to clients, and streamline the whole process.

Mistakes or Surprises Along the Way

“The biggest thing for me was getting over the fear of putting myself out there for client acquisition,” Brien told me.

If he had to start over, he said he’d be more fearless and go harder early on putting out to the world what he’s doing.

Brien said that most of the 11 months it took for him to get his first client was him battling with himself.

“2022 is the year of scaling,” Brien told me when I asked him about his plans.

Brien is going to take on more help on the business development side, and stop relying on his referral network so much.

Brien is also planning on packaging up a service for automotive dealers specifically, something he’s been working on successfully with an automotive client he has.

Brien’s #1 Tip for Side Hustle Nation

“Do one thing a day to get closer to your goal.”

1 thought on “Building a 6-Figure Agency: From Imposter Syndrome to $1500 Recurring Clients”