In this special 300th edition of The Side Hustle Show, I’m excited to feature 5 listeners who took action on specific ideas they heard on the show or read on the Side Hustle Nation blog — and turned that action into concrete results.

Those results range from their first $1000 on the side, up to a $700k e-commerce empire, but the point is they made something happen.

Tune in to hear how they got it done, and check the text summary below. 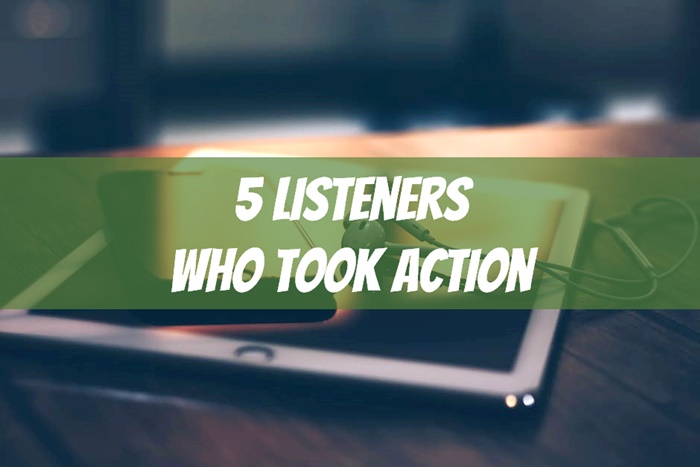 First up is Preston Lee, the founder of Millo.co. Millo is a blog and podcast network for freelancers, that Preston built as a side hustle for years.

He actually shared several episodes that have added directly to his bottom line.

The first was episode 171 with Jason Zook, which talked about selling sponsorships.

“The idea of selling it before the content was even there was really there was fascinating to me,” Preston said about the episode.

Prior to the launch, he reached out to some businesses he thought would be a good fit and made his pitch. In the end, he pre-sold his entire first season of 8 episodes for $4k in total.

It helped that he already had a blog audience, but he added that Jason’s method is something anyone can try.

Preston also took notes from episode 268 with Rosemarie Groner, and began selling an inexpensive product to his new email subscribers. Rosemarie did this on her lead magnet “thank you” page, but Preston found better results by adding a separate email in his onboarding sequence.

That one email has netted him an extra $2000 to his bottom line so far this year.

He said he saw his open rates improve from 8-11% to 18-20%. Preston thinks this is due to email providers seeing signals that there is strong engagement with his emails.

Related: My Review and Demo of ActiveCampaign

Preston also took action on episode 257 with Michelle Schroeder-Gardner. She recommended going through your top-performing content and adding or highlighting relevant affiliate offers.

When Preston did that, he added another incremental couple thousand dollars to the business.

2. The Print on Demand Merch by Amazon and Etsy Side Hustle

Flav Maderios was inspired to start a t-shirt selling side hustle after listening to episode 216 with Elaine Heney.

“I kind of taught myself design,” Flav said. He said he wasn’t super proud of his first designs, but took a Udemy course to improve and even began outsourcing some designs.

He uses Affinity software for his images and Canva for text-based designs.

(I tend to use PowerPoint and PicMonkey.)

His strategy has been to create shirts for a mix of both trending topics and national holidays/events and evergreen styles.

As well as producing great designs, Flav says researching keywords is important for the visibility of your designs within Amazon. He recommended the keyword research tools Merch Informer (paid) and Ubersuggest (free; uses Google data).

For those who are concerned about market saturation, Flav said it’s still early days for the Merch platform and they are branching out into new products like pop sockets and phone cases.

In what I thought was a cool way to expand his business, Flav syndicates his bestsellers to Etsy. But rather than stock all the shirts in his garage, he uses another print-on-demand service called Printful to print and ship his orders.

You can find out more about Flav and his Merch business at sidebusinesslaunch.com/merch.

3. Starting the Loan Signing Side Hustle

PJ Edwards’ story is a great example of taking action and seeing almost immediate results. After listening to Brian Schooley’s story about becoming a loan signing agent on episode 286, that’s exactly what she did.

After thinking over the idea about becoming a loan signing agent for about a year, she said to herself, “Well go ahead, what do I have to lose?”

She went online to the Texas state website and submitted an application to be a notary. It cost $85, she also paid around $200 for 4 years of liability insurance, and then started working through Mark Wills’ Loan Signing System.

PJ signed up for the signing services given in the course and approached title officers and loan companies to get on their books. Shortly after she started getting assignments sent to her via text and email.

The first person to respond gets the signing gig, so PJ keeps her phone on her and is quick to respond during the day. So far, she’s done 7 signings that paid between $40-$150 each and has another 5 lined up for the next week.

Nate and Ashley are on track to sell $700k worth of products on Amazon this year, and they’ve only been working on their business full-time for about a year.

The pair started out shopping for another Amazon seller, who was actually a rental tenant of theirs. After a few months, and inspired by Amazon sellers like Ryan Grant on The Side Hustle Show, they decided to start shopping for themselves.

In September of last year, Ashley lost her job. Around this time their tenant referred them to someone selling their Amazon business. The business wasn’t doing a huge volume, but had the advantage of already being “ungated” in a lot of categories.

Their criteria for selling items is to look at the sales rank. “Generally, if it’s in the top 1% [of a category] we’ll look at it,” Ashley said. As far as expected return on investment, she said they try to stay around 20% ROI.

Nate and Ashley have been able to find profitable items in a crowded space by selling higher price point items. They’ve recently started working with a prep center to handle and ship their inventory.

They shared their email address if anyone would like to find out more or has any questions for them, you can contact Nate and Ashley at – fbaabroad@gmail.com.

5. From Employee to Free Agency

Last but not least is Amy Hebdon from PaidSearchMagic.com. She’s a search marketing pro and turned those skills from her day job into a fast-growing agency that supports both her and her husband.

Amy has been doing paid search for her day job since 2004. She would get people reaching out to her for help but didn’t really know how to take advantage of these opportunities at first.

“I really wanted to figure out if there was an opportunity here, and if I could scale that up,” Amy said.

Last November she decided to do exactly that. She left her full-time job and ended up booking $18,000 worth of work the very next month!

She has also found success on the Clarity.fm platform. It was a blog post on Side Hustle Nation about how to optimize your Clarity.fm profile that inspired Amy to put some work into her account.

Not only has she had several consulting calls and helped people directly through the platform, she’s also found long-term clients. Amy said, “Most people aren’t looking for a one-off call, most people are vetting you to do projects.”

She’s been working with one client for more than a year and a half now after meeting on Clarity.

#1 Tips for Side Hustle Nation

What action have YOU taken as a result of the show or the blog? Let me know in the comments below!

6 thoughts on “300: 5 Listeners Who Took Action and Are Seeing Awesome Results”