It wasn’t a 7-figure, never-work-again type of exit, but when the funds were deposited, it was the largest single amount ever to hit one of my accounts.

Over the course of 9 and a half years of running Virtual Assistant Assistant–including the proceeds from the sale–the site generated over $550,000 in revenue.

This is the story of how I started, grew, and sold a very part-time online business.

I hope it inspires you to start one of your own.

Like all side hustles, this one starts with an idea.

And in this case, the idea to start a directory and review platform for virtual assistant services came from a pretty random place.

I was actually working on a failed project in the wine niche, when I came across a site reviewing various wine clubs.

Hmm, this is an interesting affiliate model…

What other niches could I pivot this model to?

What was I a relative expert in?

I’d made several virtual hires at that point, found the whole industry fascinating, and felt like there might be an opportunity to help others find the right virtual help for their business.

It was just enough of an idea to get started.

What would I call this project? I searched for available domains with the keyword “virtual assistant” in the URL, and ultimately registered VirtualAssistantAssistant.com.

Yes, it’s a mouthful. And yes, I thought it was clever.

(A year later, I bought VirtualAssistantReviews.com as well. It cost $100 from the previous owner.)

Inspired by the wine club review site, I chose the same theme they were using. It was free.

If you see a site you like, you can use What WP Theme is That to see what they’re running.

In the outsourcing spirit of the site, I hired a developer on Elance to customize the theme.

My idea was to allow for customers to leave reviews for the various virtual assistant companies, so I needed a way for them to do that.

One of the leading plugins with that functionality at the time was called WP Review Site. It cost $99, but no longer exists.

With those foundations in place, I began creating content. That meant both informational articles on the benefits and how-tos of working with virtual assistants, and company profiles.

The company profiles became the primary traffic drivers and was by far the most frequent type of content I published.

These would include the basic who/what/when/where/why/how type of information, and had a form at the bottom for customers to leave a review with their experience.

(By the time I sold, I’d added almost 400 of these company profiles. I had no idea how big the industry was when I started!)

Here’s what an early version of the homepage looked like: 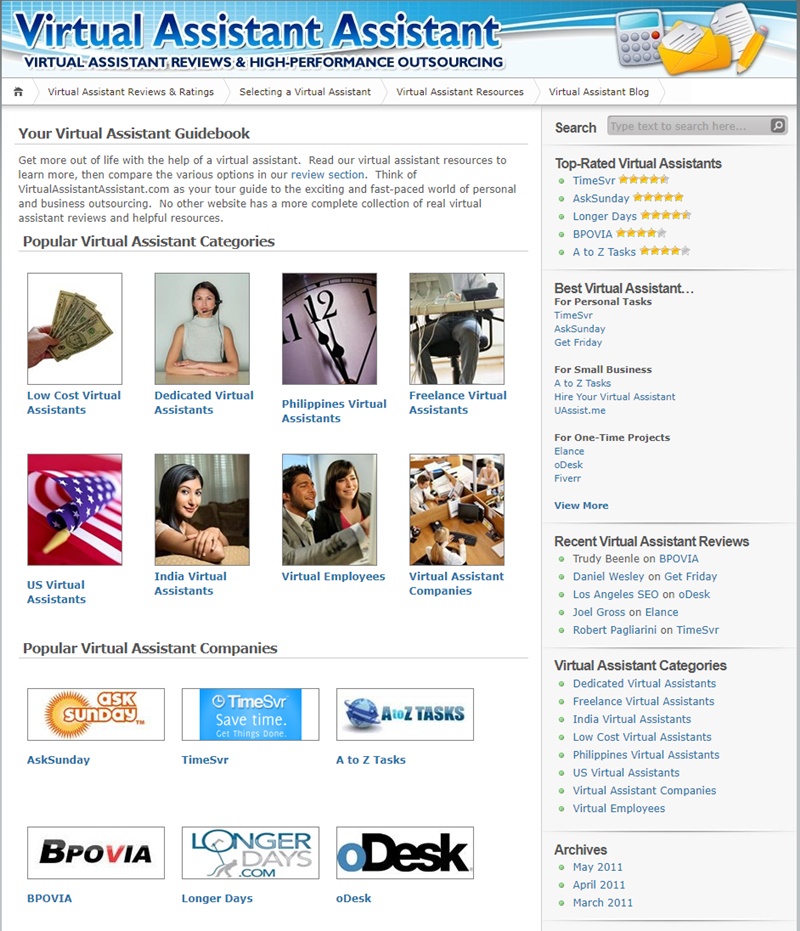 Note the Fiverr-ific header and the two spaces after every period. :)

In the early days, most of the virtual assistant companies didn’t have affiliate or referral programs.

But a few did, and that gave me confidence that companies might be willing to pay for qualified leads in this space.

And since in many cases, virtual assistant clients tend to stick around for a long time, those leads could be pretty valuable.

So the site ended up working like most other B2B review platforms–on a pay for performance basis for referring new customers.

Over time, I added some advertising options as well.

In 2011, that first year, the site earned $1000–more than enough to recoup my initial investments and encourage me to keep going.

If the site was going to be the authoritative review destination like Amazon is for physicals products or TripAdvisor is for hotels, I knew I’d have to go and hustle for those initial reviews.

What that looked like in practice was monitoring Twitter and Google Alerts for any mention of the companies I’d profiled. I’d message the authors of those tweets and ask them if they’d consider sharing their experience (good, bad, or ugly) on the site.

I believe that user generated content was really helpful both in the eyes of prospective customers and in the eyes of Google. Slowly but surely, the site began to pick up some organic search traffic.

My main business I was running at the time relied heavily on ads, so the concept of “free traffic” was new and exciting!

Important Online Business Firsts (for me)

I learned so much in starting and growing this site. It gave me a place to experiment with new tactics and ideas, and it helped solve a real pain point for other entrepreneurs.

(Something that failed wine site never would have!)

Here are some of the important “firsts” I have the Virtual Assistant Assistant project to thank for.

Viewing WordPress as a Site Builder (not just a blogging software)

Prior to starting this site, I’d only used WordPress as a blogging platform. Diving into this project opened my eyes to how powerful it can be as a true website building tool as well.

My first-ever guest blog posts were in support of this project.

I reached out to productivity-themed sites and wrote a handful of posts to build authority and backlinks.

I remember propping up my laptop on a stack of books to get the crappy built-in webcam to a better height for recording.

Most of these didn’t get a ton of views, but I always reasoned if someone was watching it, they were a pretty well-qualified lead.

Plus, this was a great way to add multi-media content to the pages and build stronger relationships with my top company partners.

Custom thumbnails? I didn’t learn about those until years later!

I set up a Twitter account primarily to engage with other virtual assistant customers and request reviews.

That probably wasn’t the best use of social media, but it was an effective way to find people talking about my topic.

This site was my first attempt at creating a lead magnet and building an email list.

I wrote up a brief guide on hiring your first virtual assistant, turned it into a PDF, and plopped it in the sidebar of every page.

The list started on Mailchimp, then moved to AWeber for almost 8 years, and then migrated to Sendfox just a few months before the sale.

The first book I ever sold on Amazon was based on this project. And it was actually really important for a couple reasons.

First, I was thrilled to create something that people paid for, even if it was just a few dollars. I remember getting my first royalty direct deposit from Amazon in 2012 and thinking, “I’m a professional author!”

Second, it opened my eyes to the Buy Buttons theory many side hustlers use to get their product or service off the ground.

I figured I could overcome a less-than-awesome looking site by establishing authority through a book. “Hey, if he wrote the book on the topic, he must know what he’s talking about,” I thought browsers would say.

Whether or not that actually happened is hard to say, but I can say with confidence through the magic of affiliate link tracking is that almost no one came to the site and then bought the book.

What happened instead was the opposite: they found the book by searching on Amazon, and then stopped by the site.

That’s the Buy Buttons theory in practice: the power of going where the cash is already flowing.

As a life-long reader, self-publishing remains one of my favorite side hustles.

I’ve also gotten a lot of mileage out of that Fiverr-purchased book cover. Here she is gracing the homepage of the site in 2013: 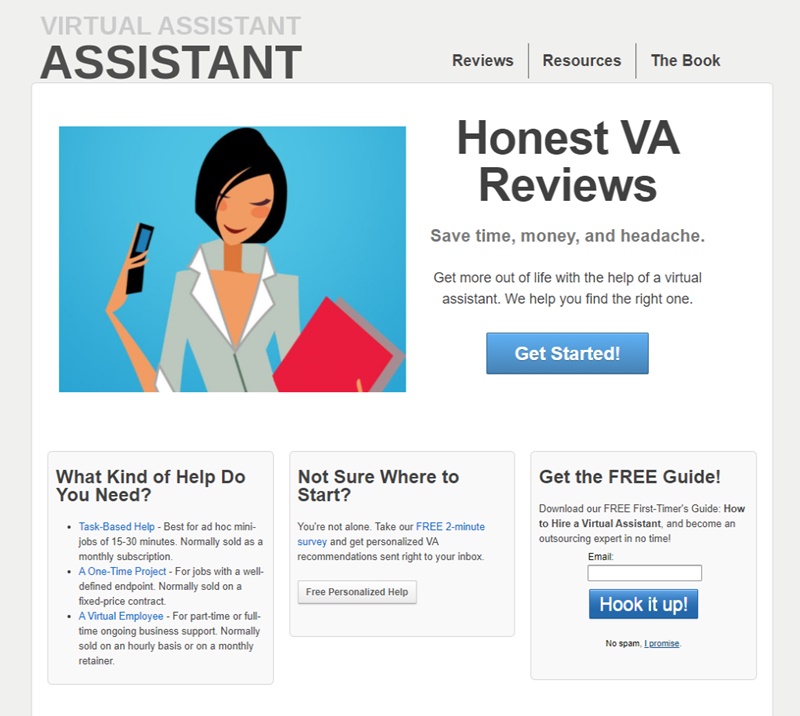 So I’ve got this asset that doesn’t require a ton of maintenance and generates more than my old day job salary every year.

Why on earth would I want to get rid of that?

I wouldn’t say I dreaded working on the site, but it didn’t light me up the way Side Hustle Nation does.

Even though my effective hourly rate for work on the Virtual Assistant Assistant site was fantastic, I felt like over the long-term, Side Hustle Nation had more upside for me personally and financially.

Since it’s a much larger business, growing it 10-20% would be much more significant.

For the first 6 years of the site, it was fun to watch the traffic and revenue grow every year.

And it’s been super steady since then, but I wasn’t sure what to do to take the site to 6-figures and beyond.

Given my pandemic-induced reduction in work hours in 2020, I wasn’t dedicating the same amount of time to Virtual Assistant Assistant.

I was still adding new content and keeping things updated, but wasn’t tackling any bigger challenges or growth projects. On the one hand, that’s the beauty of an online business — once it’s running it can still pay you whether or not you work on it that day.

But my fear was at some point all that cumulative not working on it would slip it into a decline, at which point it would be more difficult to sell.

Over the past couple years I had several conversations with semi-serious buyers, all people within the industry.

But no concrete offers on the table.

After chatting with Dom Wells on the podcast this summer, I submitted the “sell us your business” form on his Onfolio website.

I had a rough idea of what the business was worth. (This type of site typically sells for 24-36x monthly net income.) Dom agreed, and actually had a buyer in mind.

The advantage of this route vs. a brokerage like Empire Flippers was fewer tire-kickers and no brokerage fee. I may have been able to get a higher multiple through them, but perhaps not enough more to offset the 15% fee at this price point.

Better record-keeping on my part certainly would have made for a simpler transition, but over a few weeks we got everything handed over.

We did a handful of “training and transition” calls to walk through all the processes and partnerships.

It was rewarding for me to get thank you notes from several long-time partners on the site, saying what a valuable addition to the industry Virtual Assistant Assistant was.

It feels a little weird to beat the diversification drum, and then turn around and purposely make my own income less diversified, but for now my main focus will be on parenting and Side Hustle Nation.

I still think there’s a huge upside for the remote work niche, especially in light of 2020, and am excited to see where Virtual Assistant Assistant goes in the future under new leadership!

To Learn More About This Business Model

If this type of business appeals to you, there are a couple Side Hustle Show episodes worth checking out:

And when you’re ready to start a site of your own, my free video series will help you out.

Big thanks to Pete McPherson from Do You Even Blog for playing guest-host and helping me tell this story on the podcast! 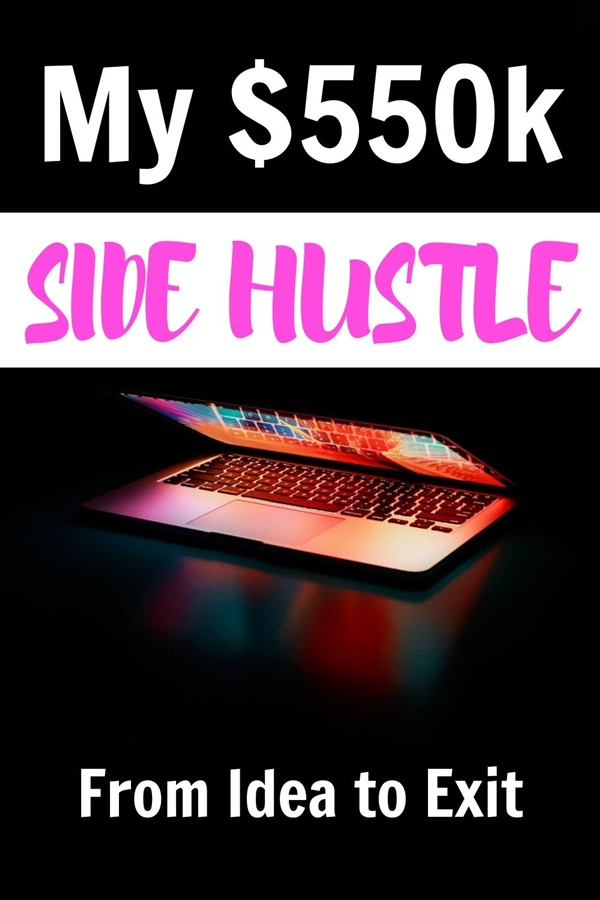 21 thoughts on “My $550k Side Hustle: An Online Business from Idea to Exit”