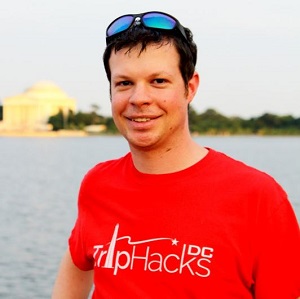 In early 2022, I caught up with Rob again to see how business had weathered the pandemic.

Along the way through, Rob built ShadedSeats.com, a resource for baseball and football fans to find stadium tickets where they won’t get blasted by the sun.

In 2021, the site earned around $5,000 in affiliate commissions, mostly from Google search traffic that the keyword research tools didn’t have any search volume.

Sometimes you can’t rely on the tool and you’ve got to trust your ability to answer a common pain point!

Here’s the audio from our catch-up interview:

The $40k Side Hustle Tour Guide

Rob brought in $40k last year hosting tours in of Washington, D.C. — all on the side from his day job, and with no marketing budget.

However, if you Google “Washington, D.C tour guide”, Rob Pitingolo’s TripHacksDC.com is nowhere to be seen.

His channel has had more than 1.4 million views to date, and he’s funneling those viewers to his site where they can sign up for a tour.

In fact, his channel has grown so much that he’s partnered with YouTube and ad revenue from his videos has become another income stream for his business.

Tune in to hear how Rob has grown his business into a fun and cash-flowing side hustle, how he leverages YouTube to reach his target customers rather than traditional tour marketplaces, and how he’s growing the business beyond just himself giving tours.

How’d You Come up With the Idea to Be a Tour Guide?

Rob is coming up on his 8th season as a tour guide for Washington, D.C. The first four of those were working for a company as a side job to his main day job.

It was while working for that company that he came up with the idea of running his own tours.

“I always kinda knew it would be great to be the boss,” Rob told me.

He started thinking about how he could operate his own tours without directly competing with his current employer. Rob was running bike and Segway tours for the company he was working for, so he decided to do walking tours for his own business.

Related: 40+ Ways to Get Paid to Walk

Rob told me the challenge that held him back for many years was how to get started. He was aware that a lot of the larger tour companies had a huge ad budget, which he didn’t have.

But he decided to jump in and started using YouTube to promote his business as he explains throughout this episode.

How Rob Marketed and Differentiated His Business

“I kinda discovered it by accident,” Rob explained.

Rob was going on vacation himself and was Googling various phrases about the cities he was going to visit.

He was searching the usual touristy stuff like, “The best places to eat”, and “How to ride the local public transportation?”

He ended up going down a YouTube rabbit hole (as so often happens) and was watching various videos on a channel about the places he was going to visit. The channel had loads of great information, and he really liked the personality of the person.

It was when he was scrolling through the comments, he started noticing that a lot of people were asking if she would show them around when they visited. But the channel host always replied saying “no”, as she’s not a tour guide.

Rob was a tour guide, however.

It got him to thinking about how he could produce the same kind of content for Washington, D.C, and when people would ask if he’d show them around, he could say “yes!”.

Rob knew from the start that he was going to use YouTube as a platform to drive business. So, he included a call-to-action at the beginning and end of every video from the very first one he uploaded.

Rob had a little bit of experience filming home movies and stuff like that, but he was new to YouTube. He remembers his first videos well. In fact, some of them are still some of his most popular videos to-date.

The first video he ever made is called “Must Have Smartphone Apps for Your DC Trip”. That was around 2 years ago, and the video has around 49k views to date.

The second video he made is called “How to Ride Washington DC Metro.” This video is by far the most viewed video on his channel to date with more than 137k views at the time of writing this.

Rob did a load of research into YouTube SEO and best practices before posting his first video.

He said he listened to Episode #207 of The Side Hustle Show with Thomas Frank from CollegeInfoGeek.com – there are some awesome tips in that episode so I recommend checking it out.

He also uses TubeBuddy, which is a tool that recommends the best tags to add to your videos, has a keyword tool, and some other useful SEO applications.

As for Rob’s top tip when making YouTube videos:

“The most important thing is just being consistent,” he told me.

Rob tries to publish a new video every Sunday, especially in the peak times of the year.

Rob set up his website just before his YouTube channel. He has a calendar on his site, so people can check his availability and book tours. This is powered by a plugin called Team Booking for those who are interested in the tech stuff.

After he started posting videos, he would check every day to see if there was a booking. It ended up taking about 2 and a half months to get his first booking. But he was excited to receive a notification that someone had watched one of his videos, clicked through and made a booking.

This person booked their tour for about a month in advance, by the time it came around Rob had booked in another 4-5 tours too.

Are You Using Travel Sites to Promote Your Business?

Rob said most tour companies use popular travel sites like TripAdvisor.com, Expedia.com, and GetYourGuide.com to market their business and drive traffic.

He calls this a “very risky strategy” though, as they charge high commissions. As much as 20%-30% on the low-end Rob told me.

He’s fortunate he hasn’t had to go down this route. YouTube is the top of Rob’s sales funnel as drives almost all of his business, and it’s a much wider funnel as he can create content around all kinds of topics.

Rob also said that people using those sites to find tours are typically looking for tours, and that’s not necessarily people who are booking a trip to Washington, D.C. A lot of his business comes from people who were not looking for a tour.

“I undercharged my first year, I know this,” Rob told me.

Rob looked at what other tour operators were charging and could see that $45 per person was the average. He could take groups of 10 at a time, so that would mean $450 per tour.

He thought that was high for a new company starting out without any reviews, so he decided to set his price at $250 for a group of 10 for his first year.

Rob has tweaked his pricing since. He’s currently charging $300 for his 3-hour tour, and $200 for his 2-hour tour he does in the winter months. He’s considering testing a higher price for the busy months this year.

How Are You Doing These Tours Around Your Day Job?

Rob still has a full-time day job and is running his tour business as a side hustle.

From working as a tour guide in Washington, D.C already, he knew the most popular tour by far was the evening monuments tour. Which worked out well as it meant he could do his day job and hold evening tours.

His office is a convenient 15-minute walk from the meeting spot for his tours, so he leaves work at 5 and kicks off his tours in the evening.

He also does a few day tours when he can fit them in and a lot of weekend tours. But the evening monument tour is by far the most popular, so it makes scheduling his workload a lot easier.

Any Plans to Hire Subcontractor Tour Guides to Help You?

Rob recognizes that one person can only do so many tours, especially as this is his side hustle.

He’s already started recruiting extra tour guides to help out. He took on 2 tour guides last year for the 2019 season and is planning on expanding his team to 4-5 for the 2020 season.

With his own time so limited, he’s not able to train tour guides from scratch. He’s had to hire experienced tour guides and pay them a little more but is fine with this as it adds value to his service.

Does It Get “Old” Giving the Same Tour Over and Over?

The answer to this according to Rob is “no.”

Rob explained that the monuments are always the same, but the people are always different. The benefit of taking these small groups of 10 is that he’s able to deliver a personalized experience.

This means no two tours are the same and it keeps it fresh and interesting for Rob.

What Are the Other Revenue Streams for Your Business?

Selling tickets for tours makes up the majority of his income, but Rob also has some other revenue streams ringing the cash register:

How Are You Fitting All This Work into Your Schedule?

“Everything happens in batches,” Rob told me.

Guided tours is a seasonal business. There are busy months, such as March and April when the Cherry Blossom Festival in on, and July when most people take family vacations.

There are also months that are almost completely dead, such as January and February. During the quiet months, Rob steps up his video content and will record 15-20 videos to drip feed out over the following months.

Why Did You Start a Podcast?

Rob also has a podcast, which he started as a way to cover topics in more detail that he didn’t think he could produce video content for.

For example, he talked about the weather in DC with a meteorologist, and did an episode on the best places to eat with the food editor from Washingtonian Magazine.

Looking into 2020, Rob’s plans are to carry on producing YouTube content and increase the number of tour guides he has working for him as his workload increases. As well as having his subcontractors handle all the trivia tours so he can focus on the private tours himself.

Rob’s #1 tip for Side Hustle Nation 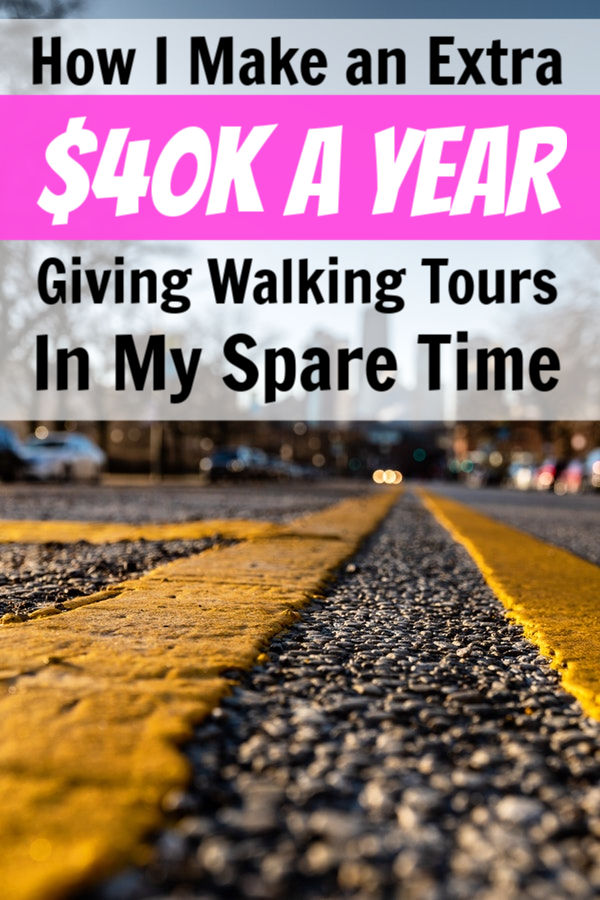 1 thought on “Marketing a Local Business on YouTube: $40k on the Side Hosting Walking Tours”