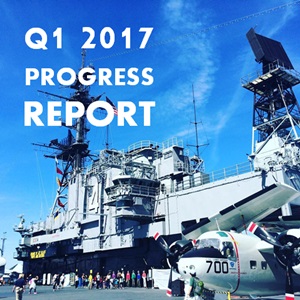 I’ve been doing these quarterly progress reports for the last couple years.

I find this exercise a helpful time to evaluate what happened over the last 3 months, to see if you achieved your goals, and to ask if you’re happier or otherwise better off than you were when you started.

I think so. The first quarter of the year seemed to fly by, even without a ton of travel.

Our little hustler is getting more fun and active by the day, and business is humming along nicely. I’m playing around with some new processes and productivity games, and blocking off more time for long-term projects.

As you’ll see, it’s a cumulative, iterative process we can work on week in and week out. Next month, Side Hustle Nation will turn 4 years old, so you’re looking at over 1400 days of effort here.

Side Hustle Nation earned over 5300 visits a day during the third quarter of 2016. That’s 1600 more people per day than last quarter, and almost 2x what it was during the same time period last year.

As usual, traffic was pretty consistent throughout the quarter.

I usually see a little peak on Thursdays when I send out my weekly newsletter, and the other tall point on the Analytics chart was when my 30-Day Money Cleanse post was featured on Rockstar Finance.

I attribute some of the traffic growth to seasonality — around the New Year it seems like a lot more people are looking for side hustle information.

I also did another round of my content audit process, removing and consolidating another 10-15% of the posts on the site, with the theory that should improve SEO traffic over time. Since that was only completed in the middle of March, I don’t think I’m seeing any results from that yet.

After my chat with Joseph Hogue on SEO strategies for bloggers, I finally dove into the data from my “Neil Patel” Google Search Console experiment, and found the pages I played with were up 24%.

Other than that, I’m still seeing strong traffic from Pinterest, though the returns there seem to be diminishing. I’ve added several new group boards this year but don’t have a corresponding increase in visitors.

In fact, my Pinterest traffic is in a slow decline:

Since it still represents a healthy chunk of the daily visitors, I’m considering bringing on some help to step up my Pinterest game.

The Side Hustle Show averaged 7300 downloads per day during Q1, a huge increase from Q4, which was around 4700 downloads a day! 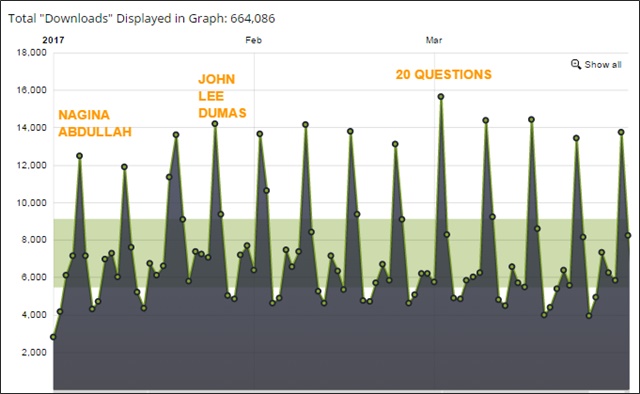 Part of that growth I’ll attribute to the same traffic seasonality above, with more people eager to start a side business as a New Year’s Resolution, but I believe a good chunk of it is due to the entry of a “competing” podcast in the space.

How do I know this “competition” was a good thing? Several people in last month’s member survey specifically mentioned they found my podcast after searching for Chris’.

All in all, it was a great quarter for The Side Hustle Show, with January, February, and March all over 200,000 downloads. Later this month, we’ll cross 3 million lifetime downloads!

Pretty crazy to think about 4 years ago when none of this existed.

And perhaps even more exciting, the show has started to directly pay for itself with sponsorships from companies like Freshbooks, Sanebox, and DesignCrowd.

Do you think your company would be a good fit to sponsor the show? Be sure to get in touch.

This is probably the most important metric of all, and it’s looking pretty solid. I added around 82 net new subscribers per day in Q1.

I actually have a hard time measuring this one because there are a few different reports and options to use, and the number is always in flux. 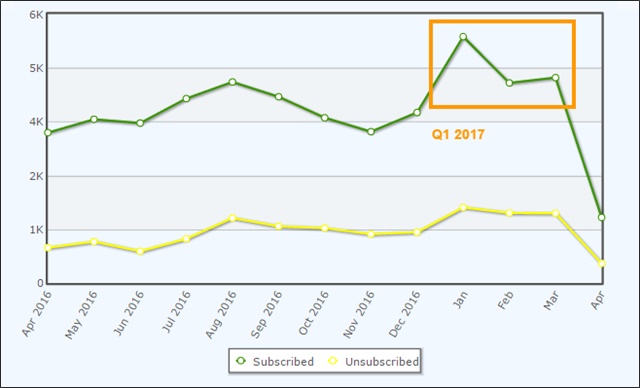 To arrive at that number, I filtered the subscriber list to everyone who was added between January 1st and March 31st and who was still subscribed, and subtracted the number AWeber said unsubscribed during that time.

Of course it’s actually a little lower because I went in and deleted over a thousand inactive subscribers as well.

Still, I see this list growth primarily as a result of the compound effect of a growing body of work and consistently creating content upgrades for the podcast.

I have almost 150 lead magnets on the site now (managed by LeadPages). If you want more people to come to your house, one way to do it is to build more roads to your house.

A full-scale email marketing overhaul is still on my to-do list for 2017. I’d like to revisit my autoresponder sequence and see what I can do with smarter segmentation to give readers the most helpful and timely content, but I keep putting it off because it’s a daunting project to tackle.

I didn’t set any big picture goals for the quarter, and instead chose to focus on “Micro Habits.”

The one that’s made the biggest impact on my work has been the daily habit of doing one proactive task before email. 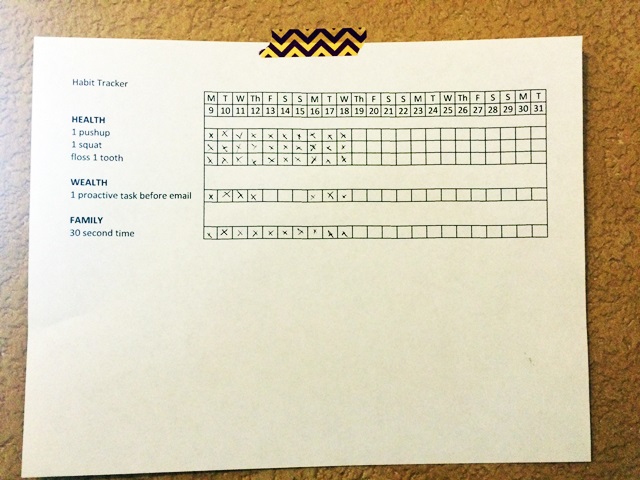 For over a decade, I’ve had the nasty habit of jumping into my inbox first thing in the morning. The problem with this is it immediately puts you in reactive mode instead of tackling your most important work first.

This one little micro habit — and tracking it on the wall — has really been a game changer.

A Free “How to Start a Blog” Mini-Course

The project I’m most excited about from last quarter was a free 6-video course I created for people looking to start a blog.

It was a lot of fun outlining the material and shooting the videos, all of which already have several hundred views. 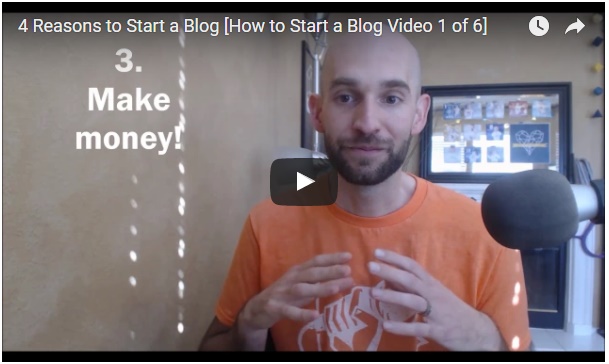 I was even able to negotiate a special deal with Bluehost and they made this dedicated landing page with my mug on it :) 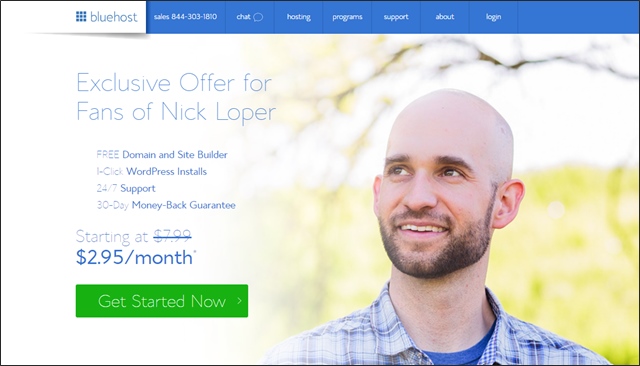 This is an asset I can keep referring to down the road and adding content to as necessary. I even registered a couple “vanity” domains that redirect to the free course so I can mention them on the podcast and they’re easier to remember. (BlogStarterCourse.com and SideHustleWebsite.com.)

I actually went back through a dozen or so relevant podcast episodes, and spliced in a little 10-second blurb inviting people to check out the course at the top of the show.

Although I didn’t get the results published until after Q1 ended, I did spend quite a bit of time thinking about the questions and structure of the survey, and poring over the responses.

There was some really helpful information in there that I know will help me serve you better in the coming months (and years).

A Subnavigation Menu on SHN

Although this isn’t perfect, it was my first attempt at making some of the archive content more easily accessible on the site.

It also allowed me to create category-specific pages that direct people to the best and most important content within that category.

Of course to build this, I had to go through and clean up all the 500+ archive posts and categories to make a coherent structure.

That in part led to…

After the success of last year’s content audit process, I decided to another round of spring cleaning on the site. In the end, I deleted or redirected another 10-15% of the posts, which in theory creates a tighter and higher quality body of work for the search engines to chew on.

We’ll see how that pans out this year.

During this process I also removed podcast episodes from the “Blog” archive. This was a decision I wrestled with but ultimately thought it made more sense to separate the two.

The formatting on that blog archive page changed slightly too, now allowing for 10 posts instead of just 5, with the goal of making relevant archive content easier to find.

Of those 11 posts, a couple were guest spots, including the $10-15k a month from blogging post linked above.

Otherwise, it was your standard mix of monster list posts, detailed case studies, and even a couple more personal posts.

We kicked off the year in my old stomping grounds in Atlanta, where we got to spend some time catching up with friends after watching the Huskies lose the Peach Bowl. 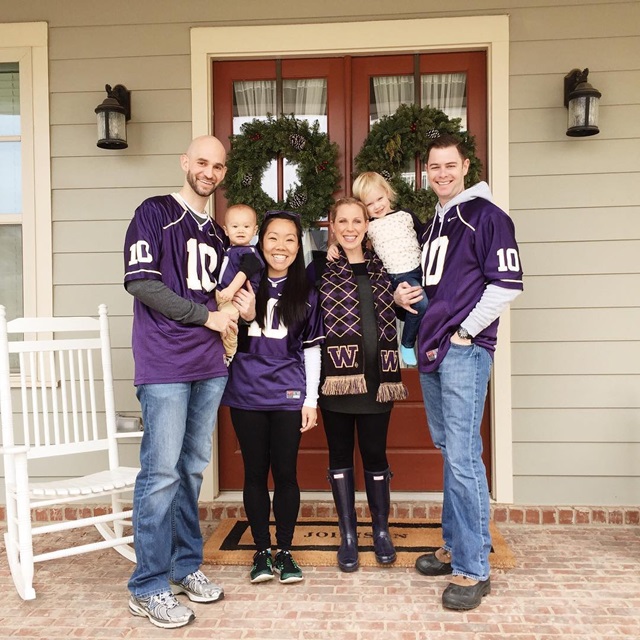 I’m really grateful to have the flexible schedule to spend time with our little hustler. He grows more and learns more every day. Pretty cool to watch! 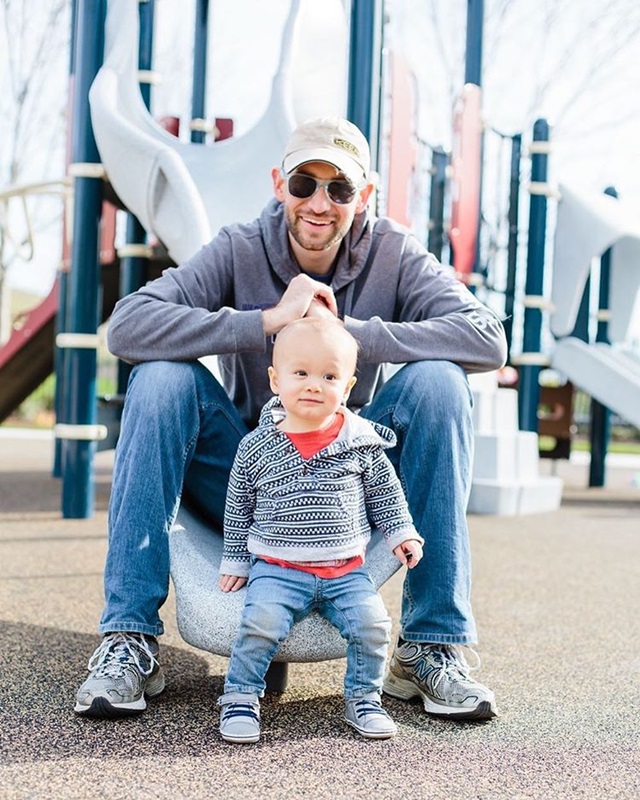 The entire family came to visit us in California. Well, mostly to see the baby. And luckily not all at once.

I hosted a Side Hustle Nation meetup in Oakland, and we had a great turnout. 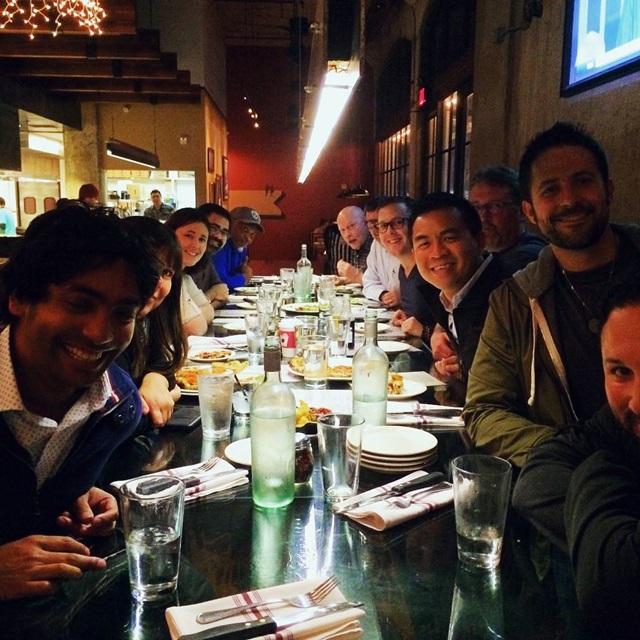 We also made a trip to Seattle for Chef Bruce’s restaurant takeover. 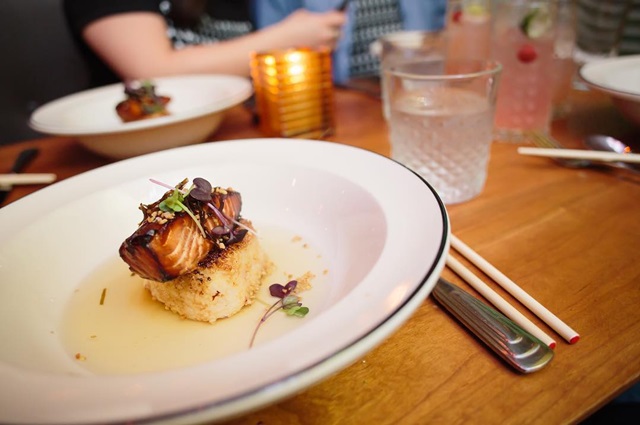 I traveled to San Diego for Traffic and Conversion Summit, where I was also able to meet some local members of Side Hustle Nation! 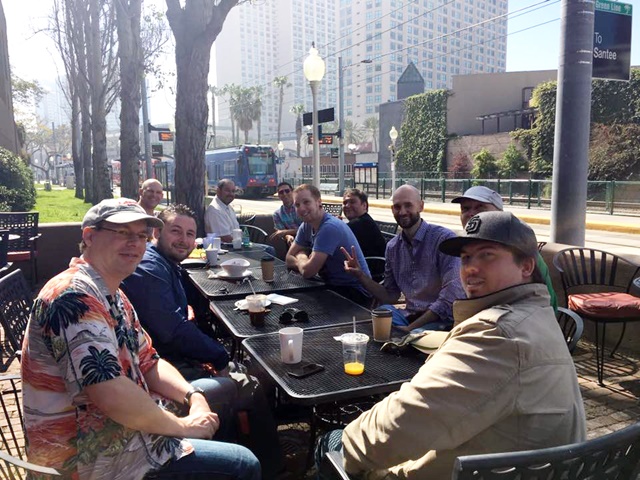 Thanks to Jacqui for snapping the pic!

In San Diego, I was also able to hang with one of my mastermind groups in person! 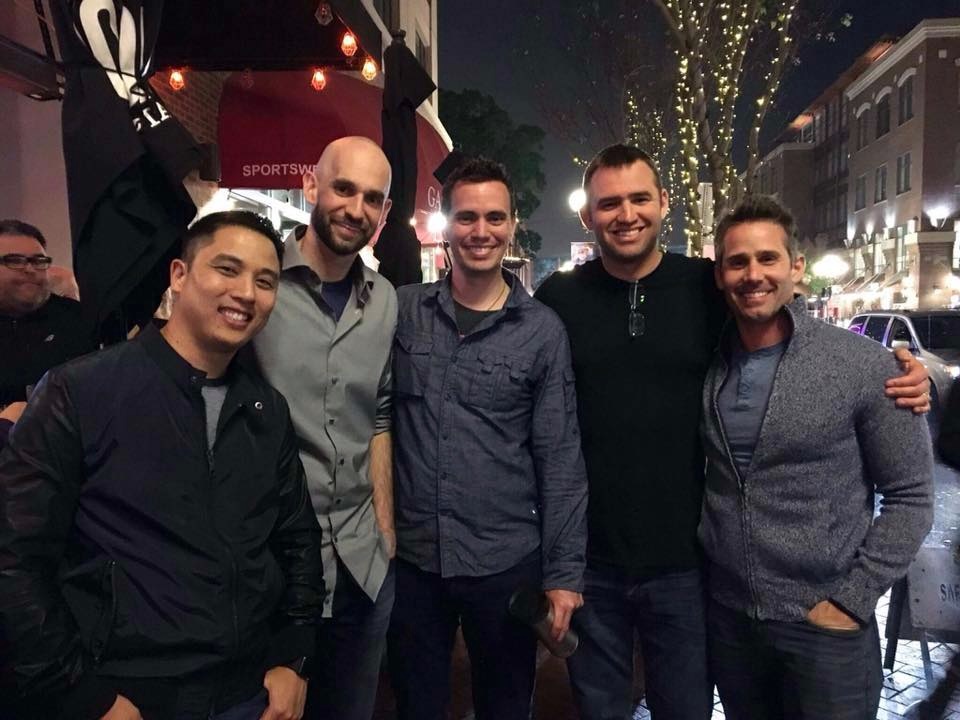 Recognize a couple of those guys from the podcast?

And against my better judgement, I also played a little basketball with Pat Flynn, Greg Hickman, Joel Runyon, and several others. It was my first time on the court in 10 years … and it’s not like I was any good then either. So sore!

I had shoulder surgery to hopefully fix some annoying ongoing pain. It went better than expected (no labrum tear) and already starting physical therapy.

Here I am hopped up on pain meds and In & Out. 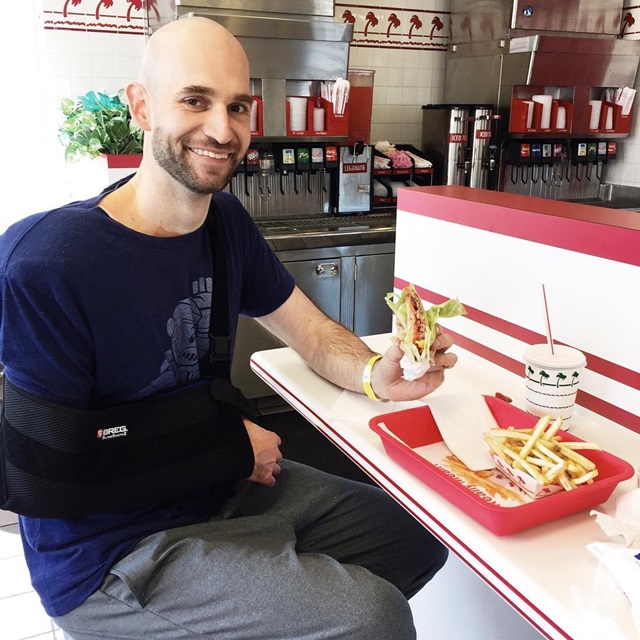 We saw Hamilton and had a date night in the city. It was our first night (together) away from him since he was born. Thanks Grandma and Grandpa!

Bryn got me a Kindle for Christmas, and I think I’m actually doing a lot more reading because of it.

This quarter I read:

I’ve also started reading Business Adventures: Twelve Classic Tales from the World of Wall Street by John Brooks. This one is a little different, but was recommended by Bill Gates and Warren Buffett so I thought I’d check it out.

Related: The 20 Best Gift Ideas for Entrepreneurs Under $100

In response to the member survey, I’m in the early stages of plotting a Side Hustle Nation website redesign.

Beyond that, I have some fun content I’m working on and still plan to revisit the email engagement side of the business. I realize I’ve probably said that for about a year, but I’m starting a “theme day” productivity experiment that’s blocked off every Thursday for longer term projects like these.

We’ll see if it helps!