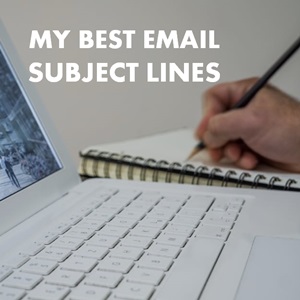 There’s a routine here at Side Hustle Headquarters: Thursday is Podcast Day!

A new episode of The Side Hustle Show comes out every week on Thursday.

But it’s true. I send out my weekly newsletter Thursday mornings, and coming up with what to say and put as the subject line is a struggle each and every week.

The email list has more than doubled this year and it’s a quick and powerful way to reach the members of Side Hustle Nation. But that’s only added to the pressure I feel each week to send out something of value.

But any email list is only valuable if people actually open and read the messages. There are a lot of factors that go into your open rate, such as the trust and relationship you have with the recipient, but the biggest factor is the subject line.

The only goal of the subject line is to get people to open the email.

I try and list out 5-10 different possible subject lines for each message. The first one I come up with is rarely the one I send.

(You can split test different subject lines in just about every email service provider, but it’s something I do pretty infrequently.)

I shoot for 30% open rates (of course higher is better), but lately usually see around 25%. My open rates were higher when my list was smaller, but the overall number of people seeing my messages now is much greater.

If your open rate is under 20%, you may have a problem with relevance. Are you sending information relevant and helpful to your subscribers? It might be time to purge those who aren’t interested in your content anymore.

I’m constantly trying to improve my email deliverability, engagement, and open rates, so I wanted to take this opportunity to look back through some of the data and see which of my subject lines from this year performed the best.

Is Open Rate a Reliable Metric?

I should also note that calculating “open rate” is an imperfect science. It’s measured with pixel tracking, so if a recipient doesn’t have images enabled, it might not track as an open.

After a few months of someone (apparently) not opening any emails from me, I’ll send them a note, and sometimes I get a reply back to the tune of “I don’t know what you’re talking about. I open your emails all the time!”

Either way, here are some email newsletter subject lines that performed well for me this year in terms of open rate reported by AWeber, imperfect as it may be.

I knew this one was a hit the moment after I sent it. I started to get replies immediately, with people saying it was a great hook and others saying I scared the crap out of them.

And while I definitely didn’t mean to terrify anyone, fear can be a powerful motivator. Use with caution!

This email was about an episode of the podcast with an attorney answering legal questions from the Side Hustle Nation community.

I considered subject lines like “Your legal questions answered” or “Is my side hustle legal”, but ultimately led with “Cease and desist”.

I think it worked because it’s a familiar, attention-getting phrase. And it was relevant to the content of the message; I used the opportunity to tell the story of how one of my best side hustles ended abruptly with a cease and desist letter.

This newsletter was about voiceover acting, and a podcast episode I did with Carrie Olsen. She explained how she got started in the business and how her best gig ever paid over $3000 an hour.

Even though she said that definitely wasn’t typical, I knew it would be a great hook. $3000 an hour? I think a lot of people opened the message curious to find out what the side hustle was.

I’d be careful not to go too crazy with them, but they can be used to make your messages stand out.

This one also utilized the little graphic icon, this time of a backpack. Since the topic of the newsletter was Phil Ebiner’s online teaching business, I thought it was appropriate.

The subject line itself is short and sweet and by including my guest’s name, I think it gave the subtle indication it was a real case study and not just theory.

“Earn up to $1700/mo part-time” cut straight to the desired outcome of making extra money, and didn’t rely on anyone knowing or caring what the sharing economy was.

Subject line: Step-by-step to $4k/month recurring revenue on the side

At 11 words, this is the longest subject line to make the Top 10. I’d be curious to find out if simply “$4k/month recurring revenue on the side” would have performed better, or if the “step-by-step” is what sold it.

In any case, the email promoted this killer post by Tom Hunt, in which he delivers exactly what the subject line promises.

Subject line: Zero to $20k a Month in a Year

This subject line makes a big, bold claim, and incites curiosity toward how it was possible and what they did.

I think including the “zero” was important because it made it relatable to anyone just starting out; we all start at zero.

The email promoted my conversation with Jon Haws, who was (and still is) completely dominating the nursing niche with Kindle books, a podcast, a course, an app, and even physical products.

Subject line: An extra $1k a month on the side

This was another subject line that emphasized “on the side”, something that clearly appeals to my subscribers.

The $1k mark probably seems more attainable and realistic than the $20k in the previous example, but both messages had similar open rates.

This message promoted my podcast episode with Kenny Azama and becoming a brand ambassador. When we spoke, Kenny was in the middle of a cross-country RV tour for a pet care brand, earning $2k a week!

I think this short and sweet subject line worked because it reads more like a personal email vs. a broadcast newsletter. It’s like I’m sending that one recipient a note about a real-life expensive problem.

The phrase came from my podcast interview with Jonathan Stark, who explained that an expensive problem was the key to any successful consulting business.

Subject line: 🕔 $4k a month on the side within 6 months

Here’s another subject line that follows the tried-and-true formula: a specific income amount “on the side” in a specific time frame. It doesn’t seem unreasonable or unattainable, but is also an amount of money that would be a significant income bump for most readers.

This email promoted my episode with Gina Horkey, who, as you might have guessed, took her freelance writing business from nothing to earning $4k a month in half a year of concerted part-time effort.

I know Amazon FBA is a hot topic with my audience, and this subject line played on curiosity and perhaps a little bit of voyeurism. We’re always curious to find out how much people are making on certain projects.

Rather than put the answer in the subject line (that would have spoiled it), I put it in the body of the email instead. If you’re curious, the answer was a little over $650.

What Makes a Good Subject Line?

My best-performing subject lines are short, specific, and curiosity-inducing.

I don’t usually capitalize letters like you would in a title. I think the lowercase format looks more informal like you might see when emailing a friend.

Can you include personalization? A subject line that did well for me but didn’t make the Top 10 was “💡 Turn your ideas into recurring revenue {!firstname_fix}”.

We’re naturally drawn to our own names and so this one performed well. (It was promoting a podcast episode on product licensing with Stephen Key.)

The challenge is I don’t have first name data for 100% of my list, so I had to put it at the end. This is definitely something to play around with and something the pet sitting site Rover.com does exceptionally well.

When I registered, they had me input information about our dog, Mochi. Now nearly every email I get from them includes “Mochi” in the subject line:

They definitely get my attention every time!

The other element to consider is your “preview text.” For lack of a better term, this is text that’s visible at the top of your email before someone opens it. It can be a continuation of your hook, that people really want to find out what it’s about.

That means paying close attention to the first line or two of your message. Some “preview texts” I’ve used lately include:

If your subject line wasn’t convincing enough, this is your next best bet to get someone to open the email.

Not every email you send is going to be a hit, and I’ve had my share of duds this year too. As promised, let’s take a look to see if you can spot where I went wrong.

Subject line: Re: Your book

I thought I was being clever with the “Re:” and many of my subscribers are interested in self-publishing (and even many who aren’t I thought might fall into the “I want to write a book someday” category).

Still, this subject line was a flop. Maybe it came across as spammy, or maybe it just plain wasn’t relevant to the people who weren’t writing a book.

The best reply I got was “How did you know I was writing a book?” Lucky guess :)

Another self-publishing themed email landed with a thud. In hindsight, I should have known better than to hit send on this one. It has very little WIIFM (what’s in it for me) and doesn’t invoke much curiosity. It would have easy to flip around too: “How to become a bestseller, even if you’re not the best writer.”

While direct quote emails have done well for me (“When I need money, I go buy it.” from Ace Chapman would be one example), this one missed the mark.

Subject line: That time I deleted half my site

This was by far my worst newsletter of the year. I actually don’t know what happened here, but suspect there may have been a broader deliverability problem rather than just a crappy subject line.

Still, I thought this one might do well if subscribers were curious to find out how or why I might (ostensibly) accidentally delete half my site. (It was actually on purpose, and resulted in a healthy bump in search engine traffic.)

But this subject line was very self-centered and didn’t answer the WIIFM question at all.

What subject lines performed best for you this year? Are there any rules or formats you try and follow before you hit send?