Is it worth it to transcribe your podcast?

That’s a question I’ve been wrestling with, and doing some testing on, so wanted to share my thoughts and results.

First of all, let’s clarify what we’re talking about. A podcast transcription is just the written record of your episode.

There are some distinct perceived advantages of providing transcriptions:

And in my mind, these are the disadvantages of podcast transcriptions:

My transcription experiment was in direct response to several readers/listeners who requested I start providing transcripts for The Side Hustle Show. Since the show was already costing me time and money to produce, I was hesitant to dump more money into the production without a clear ROI.

(Perhaps a little short-sighted, because even with the expenses of podcasting, I believe it has tremendous value.)

But I could see where they were coming from. I know when I’m going through my Feedly and come across an interesting-sounding title, something like “The Top 5 Ways to Save Money on Plane Tickets,” I’m physically annoyed when I find out it’s a video.

“Bah, just tell me the 5 Ways! I don’t have time to watch your stupid video!”

(For some reason, a similarly-titled podcast episode wouldn’t bother me as much, I think because the shows I’m subscribed to automatically download to my phone. There’s no “fear of missing out” — I’ll get to it on my next dog walk.)

My Breakdown and Results

I had 4 episodes transcribed:

Episode 49: Blogging to a $1 Million and Staying Sexy

Episode 50: What I’ve Learned and Applied from 49 Awesome Entrepreneurs

People can read must faster than they can listen. But here’s the truth: not one person commented on the newly available transcriptions or thanked me for providing them.

Maybe that’s not the best measure of impact, but it’s really all I have to go off.

I could look at the “time on site” metric in Google Analytics for the show notes pages, but people can also play the audio file directly on those pages so that’s not a perfect test either to see if the transcripts are getting read.

The built-in media player is somewhat of a control variable though, and people spent almost a minute longer on the podcast episode pages with transcriptions than they did on those without. 4 minutes 16 seconds compared with 3 minutes 20 seconds.

That tells me that people are spending more time reading the transcribed audio.

To track the pdf transcription files, Moz recommends either appending each pdf download link with a special “?pdf=episode-[number]” parameter, or adding the file download as a trackable “event” in Google Analytics. Unfortunately I did neither of those in advance.

That means I have no reliable way to gauge how many people read the transcripts. If anyone has some stats on this, please feel free to share!

I was surprised to learn that more than 35 million Americans are hearing impaired, according to a 2008 study. That’s a HUGE potential market segment to tap into.

I wish I had some anecdotal evidence to share on this one.

Instead, I have some data on the average number of pageviews to each show notes page, though this is skewed by a number of external factors including the general popularity and subject matter of the show, the guest, the amount of social media sharing, and the general growth trends of the site’s overall traffic.

Still, I was surprised to learn that episodes with transcripts received 50% more pageviews; an average of 662 pageviews so far this year, compared with 422 for episodes without.

Not a perfect or purely scientific number (the episode on Kindle publishing got some above-average attention and debate from an author’s group on Facebook), but I think the increase in pageviews is still significant.

The average show notes page has earned only 30 search engine visits this year.

But how did the 4 pages with transcripts do? With an extra 4000-6000 words of original content on each page, it would stand to reason they could be indexed and ranked for a ton of long-tail terms.

Surprisingly, they did 14% worse than the transcript-free pages with just 250-300 words of content.

That’s pretty disappointing because the search engine benefit was one of my primary motivators!

Note: Google could be indexing the transcript pdf files and sending traffic directly to those, but I’m not sure how to track that.

Transcription from a name-brand service like SpeechPad will run at least $1 per minute of audio. With an average of 4 35-minute episodes per month, I was looking at an extra $140 expense — which again, seemed like a pretty steep investment to make.

Because I still wanted to run the experiment, I instead went searching on Fiverr for professional transcriptionists and largely struck out. I created a short list and reached out to the most promising candidates.

Several did not reply at all, and those who did had such horrible English skills I knew it would just be a disaster. Pro Tip: When applying for transcription gigs, spelling, punctuation, and capitalization matter.

Finally, I brought up the idea in my mastermind group and a fellow podcaster, Charlie Poznek, referred me to a transcriptionist on Elance who was crazy affordable — around $0.25 per minute.

That made my experiment around $32 for the month. Much easier to swallow, but still an added expense with an unknown ROI.

If you have a lot of audio, I recommend checking out an AI transcription service like Otter for as little as $10 a month.

The text files I got back required some minor editing and formatting before they were ready to publish. For example, one was a solid 4000 word block of text with no paragraphs, ugh.

The quality and accuracy was fine — definitely not perfect (which was difficult for me to resist the urge to go through line by line and fix every little thing) but certainly good enough to get the point across, and a great value for the price.

In a perfect world, the transcript would include relevant links in context and be pre-formatted and ready to go. But that stuff is something that could easily be systemized, trained, and outsourced as well.

Each transcription probably added around 20-25 minutes to the time it took me to publish the episode. (The first one took way longer because I had to create a pdf template file, but now that that’s done it’s much faster.)

Was the extra time investment worth it?

Do Transcriptions Cannibalize Downloads and Listens?

One of my biggest fears was turning highly-engaged listeners into less-engaged readers. Instead, this could be framed in a more “half-full” way by saying transcriptions could turn non-participants into readers, which is certainly better than nothing.

So at least the numbers didn’t go down, but the general trend of the podcast is up, in fact it’s up significantly since the beginning of the year. Maybe it’s not about the raw downloads, but performance against the benchmark trendline?

In January the show got 4275 downloads. By May, that number had more than doubled to 8979.

Based on that trend, I’d expect the podcasts with transcriptions (which appeared in April and May) to have beaten the 4 weeks’ averages by 250 downloads or more. 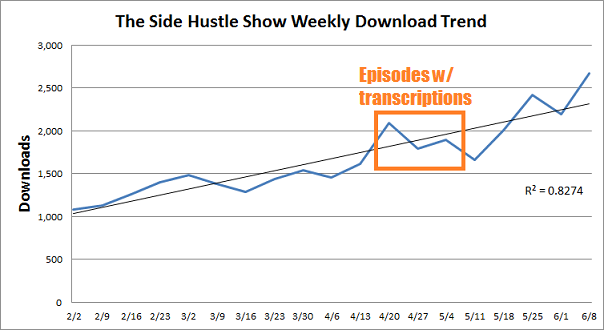 Still, the chart shows no significant variation from the trendline during the transcription test. This is inconclusive and I’m unable to tell if the transcriptions may indeed be cannibalizing downloads, or simply opening up the content to a new audience who prefers to consume the content reading.

What Do the Pros Do?

Unfortunately, there doesn’t seem to be much consensus when it comes to transcripts among top podcasters either.

What do you think? If you host a show, do you provide transcripts? Why or why not?

As a podcast listener or blog follower, what’s your take?

It all depends on whether you can afford it and if it makes sense for your audience. Personally, I think I need to grow the listenership a little more and build up the revenue before buying more transcriptions.

8 thoughts on “Are Podcast Transcriptions Worth It?”