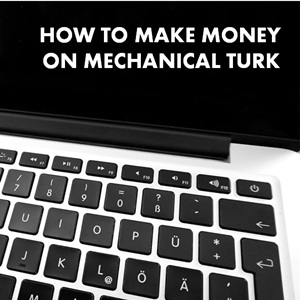 Mike is such a successful “Turkey” (my made-up nickname) he even wrote a book on the subject: Side Hustle From Home: How To Make Money Online With Amazon Mechanical Turk.

Read on to hear how Mike tackled this open-to-almost-anyone side hustle.

I started looking for a side hustle right before my first daughter was born. I was putting together a mental checklist of all the expenses we were about to incur — daycare, diapers, food, etc. —I started freaking out a little bit!

Nick’s Notes: I’m right there with you!

My wife and I already had full-time jobs so I was looking for something to supplement our income, preferably from home. The last thing I wanted to do when starting a family was to pick up a part time job and never be home. So I started looking to see if I could find a way to make money online.

Mechanical Turk is a platform created and operated by Amazon for low-skill “human intelligence tasks,” such as identifying pictures, data entry, quick surveys, and more.

It’s a way for companies to quickly and affordably outsource and crowdsource certain tasks, and a legit way for individuals to make extra money — though often not much –performing those tasks.

Amazon MTurk: A Legit Way To Make Money From Home

It was only when I came across a Yahoo article on ways to make money from home that I finally stumbled upon my answer.

Last on their list was Amazon Mechanical Turk. It’s a site where businesses, researchers, and universities post tasks to be completed by online workers. While normally skeptical, I figured since it was hosted by Amazon and listed on Yahoo, it was probably legit.

I did my own independent research and I concluded that this had some potential. 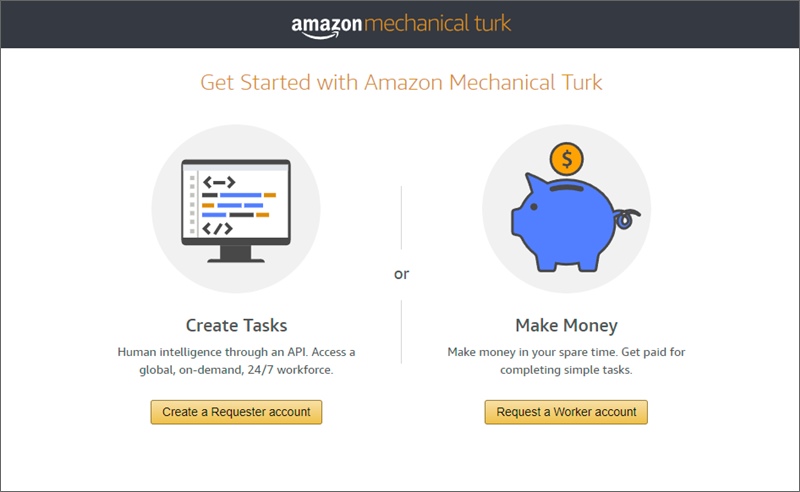 Each HIT has a price that it pays to complete it as well as the time allotted to complete it. You can scroll through the list of work available (typically hundreds of thousands of HITs at any given time) and accept the ones you want to work on.

Once you complete the work, you submit the HIT and await payment.

There are a large variety of HITs available to work on.

If surveys aren’t your thing, there are also:

How Much Can You Make on Mechanical Turk?

When I was really focused on this, I made anywhere from $150-300/week and over the last 6 years have earned over $50,000 in total. Not bad for working on tasks right from my computer at home.

I’m still active a few hours a week, to fill in gaps in my schedule with something that makes extra money.

Now that diapers are behind us, I dump all the money I make on Mechanical Turk into my and my wife’s IRAs. In that sense, making that extra money makes more money for us. Every little bit helps for the end goal of financial independence!

Your potential earnings really depend on how much time you put into it. There’s work available immediately upon signing up, but many of the higher paying requesters require you to complete a certain number of HITs before you can work on their tasks. Qualifications of 100/500/1,000 HITs completed are pretty common to access some of the better work on there.

Nick’s Notes: In that sense, it’s similar to other freelance platforms. You might have to “put in your time” with some lower-paying work in order to build up your portfolio.

Having worked on Amazon Mechanical Turk for over 6 years (completely as a side hustle), I basically meet all qualifications from a HITs completed standpoint (over 150,000 completed!).

Nick’s Notes: That averages out to $0.25-0.35 per task, but as you can see in Mike’s case, it definitely adds up to some significant earnings.

If you love the idea of getting paid to do short tasks like surveys, check out these popular Mechanical Turk alternatives:

How Long Does It Take To See Real Money on Mechanical Turk?

So what about those just starting out — without all of those HITs completed yet?

I’ve gotten a few friends of mine signed up and earning $100/week after only a couple of weeks.

I try to look at it from an hourly rate standpoint. Sure, a survey might only give you $0.40 but it might take you 2 minutes to finish. That’s a $12/hour pay rate and you made it sitting on your computer at home.

Every HIT pays a different rate, but you can probably expect to average $6-12/hour on average.

These days, I can be more selective about the work I do and consistently average $16-22 an hour.

(You can use a browser extension like CrowdWorkers to help track and optimize your hourly rate.)

What Else Could You Be Doing?

Nick’s Notes: One thing to consider with Mechanical Turk is the opportunity cost. We’re talking about less than minimum wage in some cases.

Is there another activity that would bring you more fulfillment or income?

What if you used that time to start a blog or online business instead?

Could you learn a more in-demand skill?

Admittedly, I delegated work there because it was cheap labor that didn’t require any specialized skills. If you think your time is worth more per hour, you’re probably right; it’s just a matter of finding a client with a problem you can solve.

Still, Mechanical Turk represents an easy-to-start side hustle. You can see some results with it right away, even if the initial dollar figures aren’t huge. Persistence pays and as Mike has shown, the quarters DO add up.

When you’re just starting out and learning the ropes with a limited number of HITs completed, you’ll probably be on the lower end of that pay scale. But it definitely picks up as you go.

Some HITs are amazing. I’ve had $3 surveys that took me 2 minutes (a $90/hr rate!) and batches of work that are 25 cents each but I could complete 3-4 per minute. It’s just a matter of being on there at the right time. 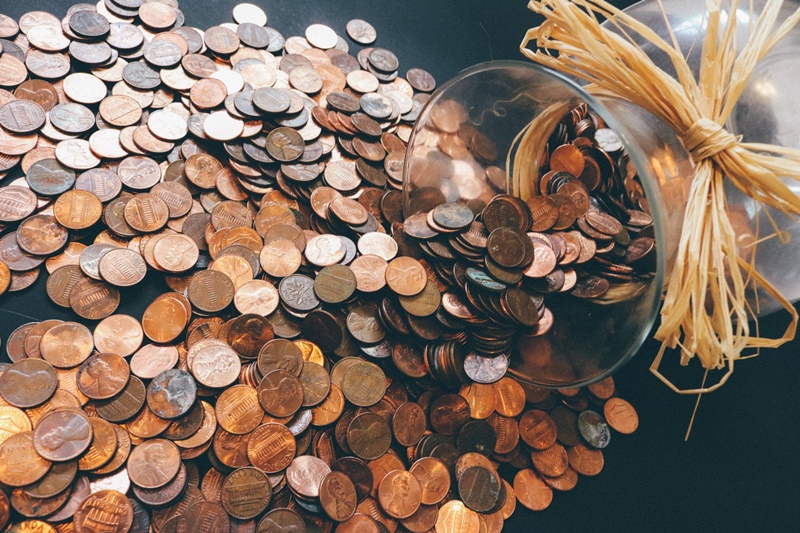 What I love about it is the flexibility.

You can work on there all day or for 10 minutes if you have a break in your day.

While you can use your earnings directly on Amazon, you can also link your bank account to transfer cash directly into your account. There’s also no minimum to hit before you cash out (unlike some other survey sites).

While Amazon Mechanical Turk is convenient, it’s not perfect.

The highest paying work tends to come through during normal working hours on weekdays. If you only have time to do it at nights or on weekends, you’ll still find work but likely not as much good work.

It’s an interesting way to make money on Amazon, but it’s also not going to make you rich. The pay is pretty decent but it definitely works better as a supplemental source of income.

Additionally, there is work available in most countries for people living outside the US, but only workers in the US and India can withdraw cash. Workers from other countries can only redeem their earnings through Amazon gift cards.

Nick’s Notes: Perhaps the best way to frame a Mechanical Turk side hustle is with a specific monthly income goal in mind. Take one recurring expense you really hate to pay — car insurance, a cell phone bill, day care, etc. — and try to “erase” it with mturk earnings.

I call this the Side Hustle Snowball.

How to Get Started on MTurk

It takes about 48 hours to approve your request. During that time, they verify your social security number (needed for tax purposes).

Once verified, you start out in a probation period where you need to complete at least 1 HIT for 10 days. During that period, you have a cap of 100 HITs per day and you can’t withdraw your money. After the 10 days are over, there are no withdrawal restrictions.

What do you think? Viable side hustle or no?

Let me know in the comments if you’ve worked on Mechanical Turk before or if you think you’ll give it a shot after reading this.

Check out Mike’s blog at TopMoneyHabits.com for more ways to earn, save and invest your money.

Mike’s book includes all the tips and tricks he learned in his first 2 and a half years as a Mechanical Turker. He shares scripts that will increase your efficiency, useful forums, and the highest paying requesters. 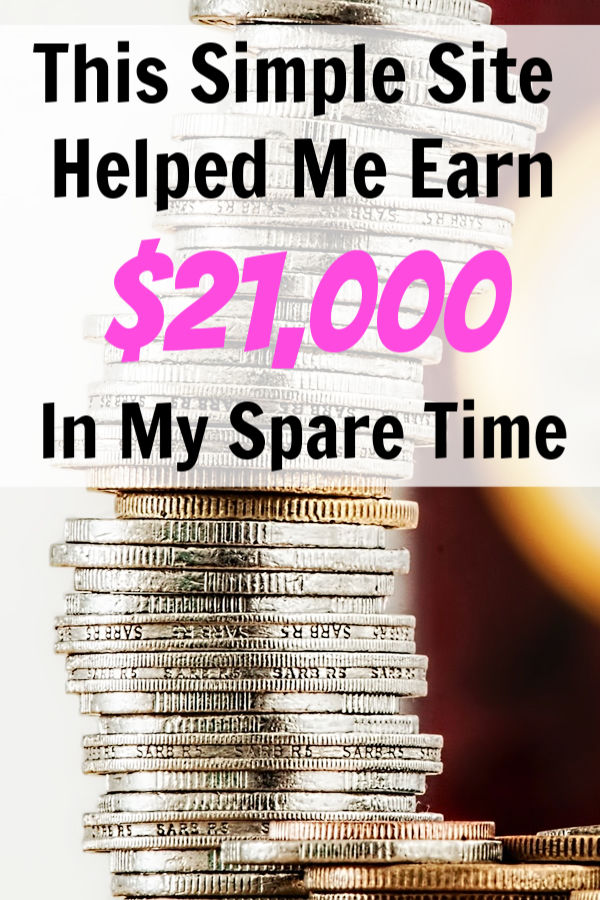 What is Amazon Mechanical Turk?

Mechanical Turk is a platform created and operated by Amazon for low-skill “human intelligence tasks,” such as identifying pictures, data entry, quick surveys, and more. It is a way for companies to quickly and affordably outsource and crowdsource certain tasks, and a way for individuals to make extra money performing those tasks.

Yes, Mechanical Turk is legitimate. The service is owned and operated by Amazon and has hundreds of thousands of users.

Can you make money on Mechanical Turk?

If you’re looking at Mechanical Turk as a potential side hustle, you can make money performing microtasks on the platform. One Side Hustle Nation reader reported earning over $50,000 on the site. Be sure to check the blog for his story. However, most Mechanical Turk tasks pay very little and may not be the best use of your time.

What are some alternatives to Mechanical Turk?

If you like the idea of making extra money performing small tasks online in your spare time, you might also consider one of several online survey apps. The most popular of these include Swagbucks, Inbox Dollars, and Survey Junkie. Check Side Hustle Nation for more Mechanical Turk alternatives.