(It’s a tradition on the blog.)

In fact, I’ve even got a physical productivity journal called The Progress Journal. 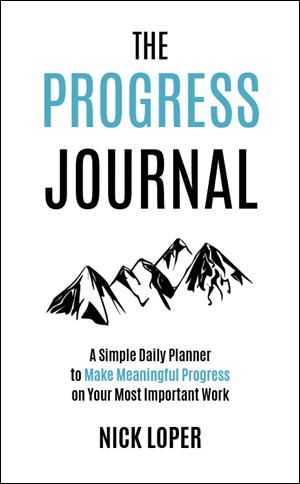 It centers on 5 key habits I’ve found make me feel more effective and happier when I do them consistently. You can learn more about the journal and what’s inside here:

Side Hustle Nation earned around 6300 visits a day during Q1. That’s up slightly from the previous quarter, but actually down about 10% compared with last year.

The decline from 2018 is entirely accounted from the Facebook traffic ads I was running early last year, which stopped in March 2018.

The January and early-in-the-year interest I attribute to New Year’s resolutions — people determined to start a business and make extra money in the new year.

The tallest spikes on the chart usually correspond to my Thursday newsletters. The best-performing subject lines:

The Side Hustle Show received nearly 9500 downloads a day in Q1. That’s up about 10% from last quarter, and up over 60% from the first quarter of last year.

The show also passed 8 million lifetime downloads, which was a cool little milestone!

Historically I’ve considered this my most important metric, but I’ve kind of backed off that. I’ve made some strategy shifts on the site to de-prioritize email capture a little bit.

Of course, I still want your email–there’s tremendous value in being able to reach people in their inbox–but I want people to want to get email from me. I want to earn it, perhaps moreso than I did in the past, if that makes sense.

Because of that, and a couple mini-purges, the list was actually flat for the entire quarter, right around 68,000 subscribers.

These numbers are from my email service provider, ActiveCampaign. You can read my full ActiveCampaign review and check out my video demo here.

What I’ve Been Working On

I probably say this every time, but the quarter went by really quickly.

Updating The Side Hustle Path

One area of opportunity I saw looking into 2019 was to improve some of the discovery points to Side Hustle Nation.

One of those discovery points is Amazon, and on Amazon a book I wrote in early 2015 is still generating hundreds of downloads a month.

I have this title set to be permafree on Amazon as a lead generator.

The thing is, it’s from early 2015. It’s not the world’s best introduction to side hustling or to my brand, and I knew it was due for a refresh. It doesn’t have a great structure, a great cover, or clear next steps. That’s all changing.

That refresh has turned into almost a full-blown re-write, and I didn’t quite get it finalized before the end of the quarter. (It’s in the editor’s hands now.)

My hope is I can slide this almost-new book in under the existing listing on Amazon though, since it has almost 200 mostly-positive reviews.

I conducted a subscriber survey for the first time in 2 years, and shared the results here. Check it out to see:

Following my recording with Kate Ahl from Simple Pin Media, I set out to makeover my floundering Pinterest account.

I think the account overall is in much better shape, but frustratingly, I’m not seeing any significant traffic growth.

This was a continued effort from the previous quarter, but the biggest thing I did on this front was remove the Sumo plugin.

It was a hard choice, given that the popup had driven thousands and thousands of email sign-ups, but the plugin was a drag on load times.

Now the homepage loads in around 1 second, which I’m happy with. Though Pingdom still gives it a “D” performance grade. There’s no pleasing these people!

Larger pages are under 2.5 seconds in Pingdom now, but in Google Analytics, it still shows average load times of 8 seconds or longer. (Which is awful!)

Not sure what that’s about, but February and March were 1.5 seconds faster than January.

So I guess I’m making progress!

A member of the free Side Hustle Nation Facebook group pointed out a cool resource for entrepreneurs to get some help in their business.

It’s called GenM, and matches you up with students interested in online business and digital marketing.

So far, my apprentice has been helping out in building a library of the existing Side Hustle Nation blog content. We’re looking at each post to see:

With that data, we can then make some updates as needed, and then see if those updates generate any positive results.

I’m up to 24 reviews on Amazon for my Alexa Skill, The Money Making Minute.

Tell Alexa to enable The Money Making Minute to try it out!

I did quite a bit of writing this quarter, including 30,000 words for the updated Side Hustle Path book. You’ll see sections of that taken from the blog and sections of the book re-purposed to the blog.

Of the blog content, I re-published 3 older posts, and created 8 brand new ones. (With the help of a ghostwriter for a couple.)

My main focus has been on The Side Hustle Show, trying to create great radio and get better as a host every week.

The most popular episodes of the quarter were:

Is there a particular topic you’d like to hear on an upcoming episode? Let me know in the comments below!

With help from Josh Bauerle and his team, I was pleasantly surprised by the final totals.

Here are my favorite or most interesting purchases over the last 3 months.

In one of my mastermind groups, we had an interesting discussion around this. A member proposed if you’re making over a certain amount (his threshold was $10k a month), you’re “an idiot” if you’re still cleaning your own house.

“Idiot” may have been a bit strong, but we’ve actually tested this out, hiring a cleaning service for the first time ever. It’s only been a few months, but we really look forward to their visits!

I went through the Handy app, and appreciated their straightforward, upfront pricing. We’ve had a good experience with everyone they’ve matched us with so far.

If you want to test it out yourself, use my referral link for $40 off your first booking.

These obnoxiously bright shoes are made by Topo Athletic. I’ve been in the market for some “natural” athletic shoes for a while, and these fit the bill. 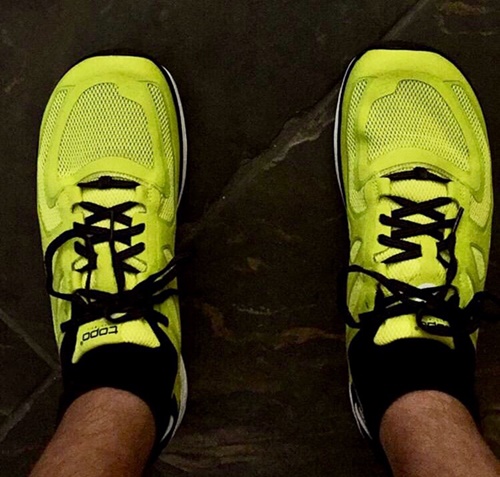 Even though the Huskies lost, our first trip to the iconic Rose Bowl was a pretty cool experience. Check out Little Hustler #2’s eyebrow raise :) 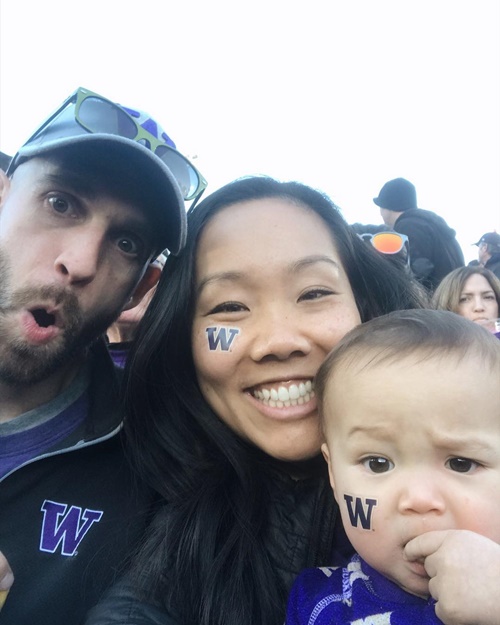 Disneyland with the Fam

While I wouldn’t recommend visiting Disneyland on January 2nd to anyone, we had a few fun moments. 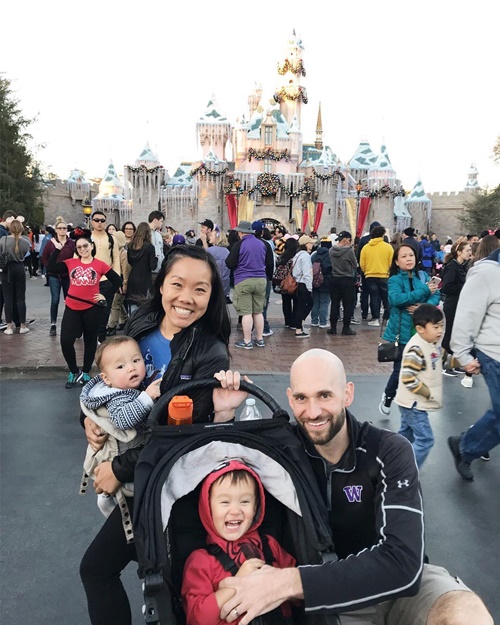 The crazy guy in the spiderman sweatshirt turned 3! Time flies.

Thanks to credit card rewards, we had a couple free nights at the Hyatt Regency Monterey. Fun little getaway and we had a beautiful day to explore the oceanfront trail.

Hanging out around Traffic and Conversion Summit

I actually didn’t get a ticket this year, but did get to meetup with several friends and affiliate partners in San Diego.

It was a crazy wet winter here in California, but that at least meant we got to go play in the snow a bit. 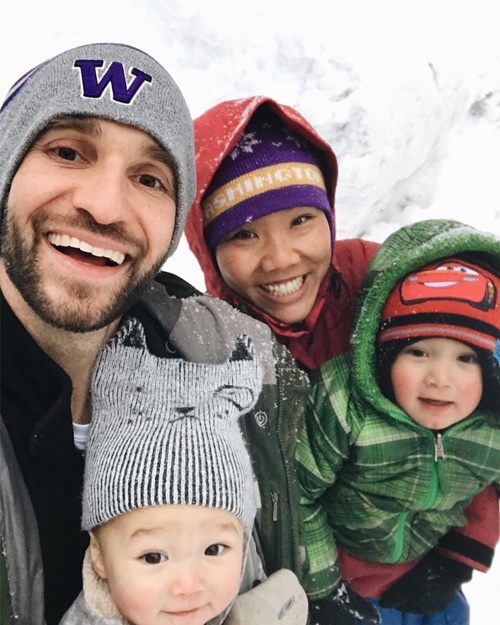 It was a light quarter for reading, but here’s what was on my Kindle this quarter.

Clockwork: Design Your Business to Run Itself – This is a thought-provoking and actionable book about where your work times goes and how to build better systems and teams.

WTF: Willing to Fail: How Failure Can Be Your Key to Success – 1-800-Got-Junk founder Brian Scudamore is an upcoming guest on the podcast. I really enjoyed our conversation, and this was a quick, fun read.

A Council of Angels – When Sean Marshall said he was writing a fiction book, I decided to check it out. Reminded me of a modern-day version of The Alchemist.

How’d the last quarter shape up for you?

How are you tracking toward your goals?