With two years of Prosper.com lending under my belt, I wanted to take a deeper dive into the 50+ loans that have defaulted on me during that time.

Prosper does NOT make it easy to access or analyze this information on an aggregate level, so it turned into a pretty tedious data-entry project. (Which I outsourced to my virtual assistant, of course. Thanks Patty!)

The results are pretty interesting so we’ll go through point by point.

My theory was that the a higher loan amount equated to higher risk, which does not turn out to be the case. On Prosper, loans typically range from $4000 to $25,000, depending on the borrower’s need and credit-worthiness.

In hindsight, I think it makes sense. Borrowers taking out a $4000 loan for example, might not qualify for a $15,000 loan. So in that sense, a lower loan amount could signify higher risk.

The median lender yield of the defaulted notes was 24.99%.

Prosper grades each borrower on a letter scale from A to E. The lower the letter, the higher the return and the greater the risk.

These numbers are pretty worthless because I can’t get an accurate percentage of the overall loan volume. For instance, it would be far more valuable to know the percentage of D notes that defaulted, rather than just the raw number. 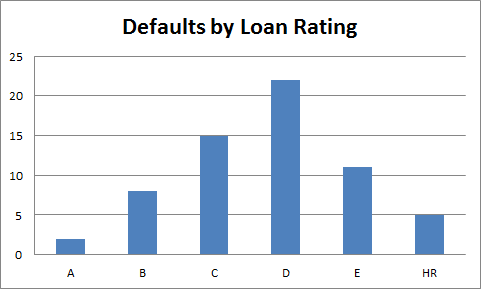 Borrowers must also submit what they intend to use the money for. The most common purpose is debt consolidation, but an entire range of reasons exist. Some more entertaining than others. 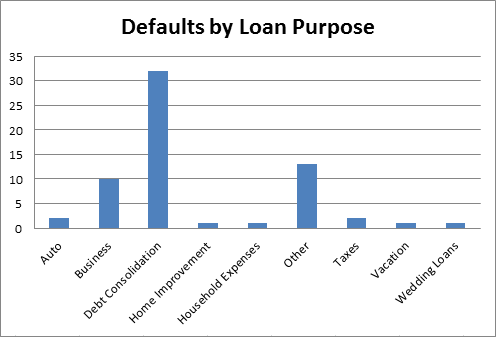 I guess I have a soft spot in my heart for business loans but they are inherently risky ventures.

Also, I’ll be sure to avoid loans for “Other” in the future — they seem to default at a disproportionately high rate!

Does the borrower’s location play a role?

Again these numbers don’t mean much because I couldn’t find a way to easily gather the overall aggregate number of loans made to each area. Instead this chart just shows the percentage of defaults that came from each region. 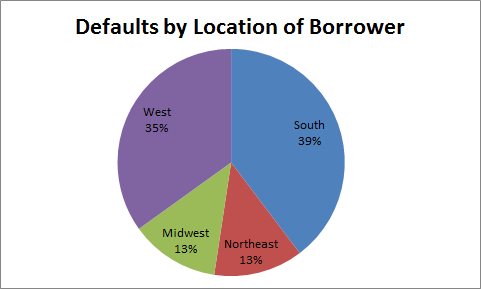 Prosper also assigns borrowers a numerical score from 1-10 based on their creditworthiness. In general, it aligns pretty closely with their Rating.

Nothing really stands out here, especially because again, I’m missing the big denominator that would show the percentage of defaults among each Score group. But I’ll include it anyway. 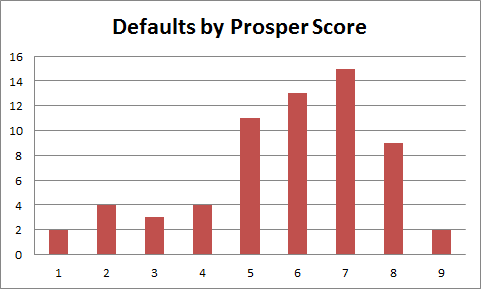 I was surprised to find even borrowers with excellent credit history defaulting on their loans. 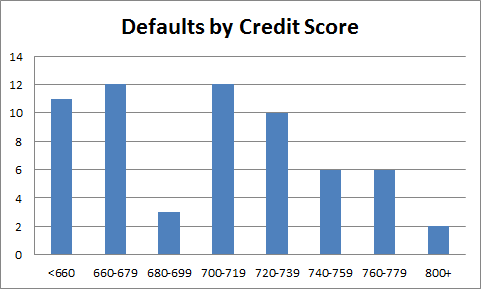 In each note, Prosper will show you if the borrower has any accounts that are currently delinquent.

I consider these a red flag and try to avoid lending to these people, but a few slipped under my radar. In fact, 22% of my defaults were from borrowers with 1 or more current delinquent accounts.

Beyond the current delinquencies, Prosper will also record the number of delinquencies the borrower has had over the past 7 years. Again, I recognize people can change but still consider this to be a red flag and try and avoid making these loans.

More than 25% of my defaults were from borrowers with 1 or more 7-year delinquencies.

This statistic shows how many times a prospective borrower’s credit has been run in the past 6 months. Basically, are they out shopping for credit a lot or are they pretty set?

Among my data set, the average number of credit inquiries was 1.4, and the median was one.

But this may be my biggest takeaway: nearly 70% of the defaulters had 1 or more inquiries.

The recommendation to set your filters to 0 for this item has been mentioned before by others but I will reiterate it here. In my data, this appears to be one of the strongest factors in default rates.

When the borrower opened their first line of credit can be used to get an approximation of their age.

I don’t find anything too interesting in this data. It could be that older people are more responsible in paying back their loans, or it could just be that fewer of them are seeking loans on Prosper.com. 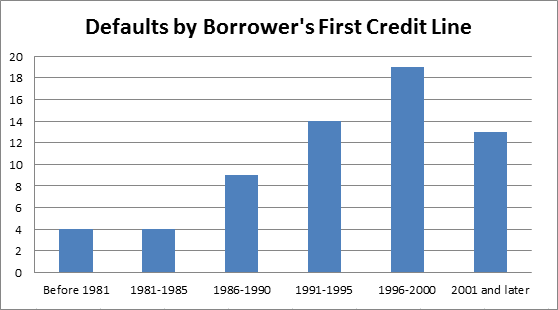 The median defaulter had 27 lines of credit open. Does that seem really high?

I think a few lines are good, because it shows they know how to use credit, but too many can get ugly.

I’ll aim for borrowers with fewer open lines in the future.

The median defaulter carried a $7000 balance, but I’m not sure how to interpret the data.

A higher balance could be a risk signal, but the opposite can be true as well. Case in point: 8% of defaults were from borrowers with a $0 balance.

To me, maxed out credit cards signal a poor financial situation and a potentially risky loan. The general rule of thumb is to keep your balance at or below 33% of your total available credit — any higher and the bureaus may reduce your credit score.

Indeed, a third of my defaults were from borrowers using 66% or more of their available credit.

Conventional wisdom holds home owners should be a better credit risk. After all, some bank probably lent them a whole lot more money than they’re asking for here.

But my data shows no definitive correlation to suggest renters are significantly riskier. 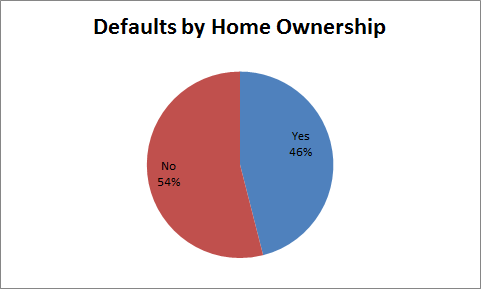 The debt-to-income ratio is a rough indicator (the lower the better) of a borrower’s ability to pay back the loan. Or at least it’s supposed to be.

My data shows a surprisingly high number of defaults from borrowers with low DTI ratios.

If anything the takeaway here is to avoid the N/A / Not-Calculated ones but other than that don’t but too much weight on this metric. 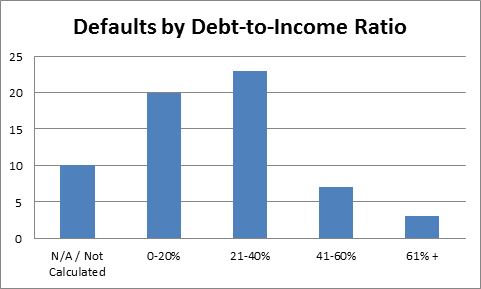 More than half of my defaults came from borrowers with less than 5 years of employment at their current job. The more tenured workers defaulted as well, but in general the new hires were riskier investments. 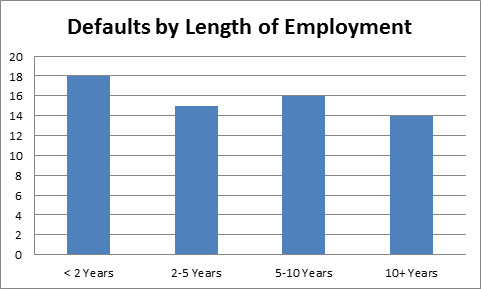 I was surprised to see so many defaults from high earners (but then again, it is “stated” income, not verified income).

But in general, the less money a person makes the harder time they may have repaying their loan. File this under the “no duh” category. 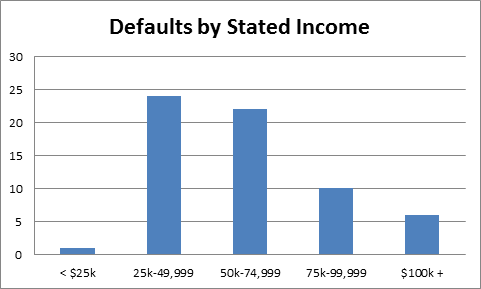 I typically try and avoid making loans to those earning less than $25k a year so the sample size among that group is likely very small.

The riskiest occupation is “Other.” Roughly 35% of my defaults were from borrowers who said their job was “Other,” “N/A,” or left the field blank entirely.

In the future, I will be avoiding these borrowers.

Prosper.com will also tell you a borrower’s history on the site if they’ve had a previous loan. It will show the amount borrowed and their repayment history.

Historically, previous borrowers have been an excellent credit risk with above average returns. Because of this, I focused a lot of attention in 2012 on repeat borrowers.

However, this is not a perfect strategy. Nearly 25% of my defaults were from previous Prosper borrowers, those with a supposed proven track record of repayment.

One of my personal theories was that if the borrower took the time to fill out the optional description area, and explain why they needed the money and were a good candidate for the loan, they would be a good risk.

Or at least a better risk than those who couldn’t even be bothered to type in a few short sentences.

Turns out, I was way off! Almost 90% of my defaults were from borrowers who’d filled out the description text.

Takeaway: Don’t necessarily discount those who skipped the description, because filling it in doesn’t seem to correlate with any improved loan performance.

If you’re ready to sign up for a Prosper account of you own and start earning great returns (and learning from my mistakes!), click here to get started (affiliate link).

Check out my full list of alternative investment platforms for more ways to diversify your investments and earn solid returns.