This is the third installment of my quarterly progress reports. If you want to travel back in time, you can check out the first two here and here.

Why “progress”? Because that’s what it’s all about.

As you’ll see, it’s a cumulative, iterative process we can work on week in and week out.

There are 3 main metrics I track: website traffic, podcast downloads, and email subscribers. The latter is the most important.

Side Hustle Nation earned around 1450 visits a day during the third quarter of 2015. Traffic was pretty consistent throughout the quarter, but was more than 2x higher than it was during the same time period last year.

The first tall spike on the chart came on July 27th, when this guest post by Neal Frankle (How a $200 Side Hustle Can Change Your Life) was somehow featured on Flipboard. Still not sure how that happened, but I’ll take it.

(Truth be told, it was pretty crappy traffic — nearly 900 visits and only 1 email sign-up.)

The second spike came on September 3rd, when I sent an email newsletter about another guest post; this time Cassandre’s case study on how she earned $1000 a month side hustling on Craigslist.

Geez, maybe next quarter one of my own posts will cause a spike!

Or podcast flat-lining? No, The Side Hustle Show continues to be an excellent growth engine, despite this conspicuously non-upward-trending chart. 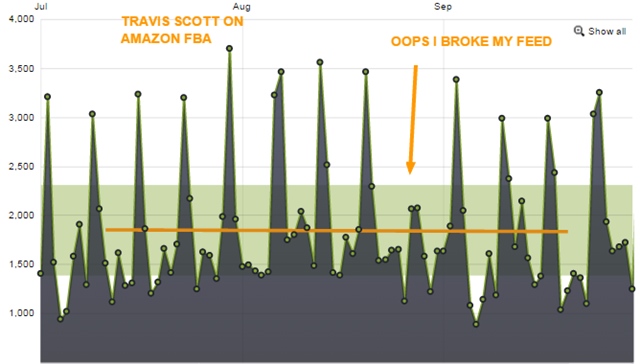 One reason for the flattening growth curve is simply releasing fewer episodes. In the second quarter, 19 new episodes came out, but only 15 aired in Q3. This is partially due to the unexpected pause in the public coaching experiment. Wellington bowed out from burnout, and I haven’t been able to reach Kathryn in months. I sincerely hope she’s doing well and selling a ton of scones!

(She really didn’t need much of my help!)

So while the raw number of downloads is off slightly, the downloads per episode is up a little from last quarter.

I added around 33 net new subscribers each day in the third quarter. Unfortunately I can’t get the AWeber data to compare to the prior year, but suffice to say it’s accelerated quite a bit from 2014. 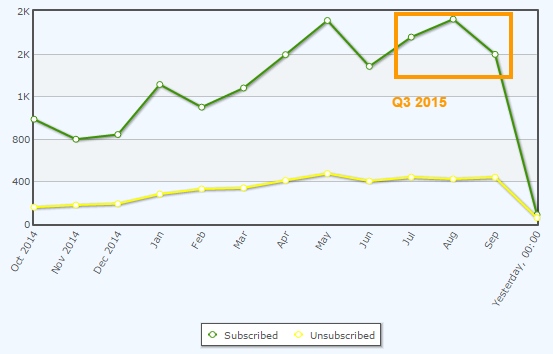 In addition the people who naturally unsubscribe (no hard feelings), I also removed about 850 inactive subscribers. It’s always a little scary to delete subscribers since “open rate” as reported by email service providers like AWeber is not a perfect science, but I think it’s an important habit to maintain a healthy and engaged subscriber base.

It’s also become quite intimidating to hit “send” every Thursday morning, knowing that message is going to hit more than 10,000 inboxes!

I worked on a bunch of different projects the last 3 months. Here they are in no particular order.

And this meta episode (a collection of the “#1 tips” from my last 50 guests) was one of my faves.

The reason is mainly posts like this one take HOURS to create. And while I like writing them, I have some data to suggest it may not be the most effective use of my time. But fear not, if you’re a fan of the blog, I’ve got some fun stuff coming.

I also took Labor Day off and was able to share a couple guest posts too. It’s interesting when I meet people at conferences and they almost always mention the podcast, but in my mind the blog came first and is still the home base!

The most popular posts last quarter were:

The article that I spent the most time on (Why Guest Blogging Sucks) didn’t even crack the Top 50 most-viewed pages.

A Top-Secret Beta Side Hustle Challenge

This is where the bulk of my time went the last 6 weeks. A few readers will know I’m talking about the Plan, Launch, & Hustle challenge that went down in September.

This was a ton of fun (and also a big learning experience) to put together. It involved setting up a membership site, payment processing, video hosting, a separate email list, and of course creating 30 days worth of hopefully valuable and action-packed content.

I’m in the process of getting feedback from the group to make improvements and determine how best to deliver the content.

More on all of this soon!

A Redesign for One of My Affiliate Sites

One of my other sites was overdue for a refresh so I turned once again to Elance for help in updating it. I picked a new theme I thought looked more modern and drew up my specs for the project.

I think I made the mistake of posting this job late Sunday night, because it immediately got a ton of responses from India. Normally that wouldn’t be a problem, but by the time Monday morning rolled around in the US, I think a lot of would-be applicants were discouraged there were already so many bids they decided not to throw their hat in the ring.

The disappointing part was that out of all 40+ Elance applicants, none really stood out as the clear winner. At the recommendation of my friend David Waring from FitSmallBusiness.com, I turned to a new site called Codeable. 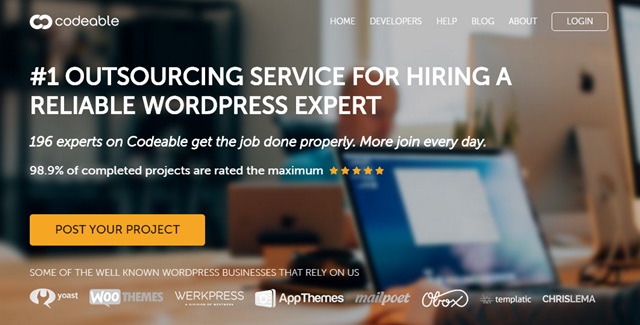 Codeable.io is like Elance, except only for WordPress developers. Perfect, just what I’m looking for.

I was a little concerned to only get ONE bid for my job on Codeable, but the guy was in the US, and was only $100 higher than many of the Elance bidders. The project had a few hiccups and took a few weeks longer than promised (like any good software project!), but in the end I was happy with the results.

The current version of Side Hustle Nation is coming up on its 2nd birthday as well, so that means this site will probably have to go under the knife soon too. Gotta keep things looking fresh!

I spent a few hours creating a new Fiverr gig that so far has been a dud. It’s part of my plan to transition toward more automatic delivery gigs rather than ones like my website audit gig that was really popular but also time-consuming.

And thankfully the gig I built last quarter started to move some units, and has earned good feedback as well.

On suggestion from Alex Genadinik, I also took a minute to add a couple more gigs that were basically the same but targeting slightly different keywords for Fiverr search. Those have actually sold a few orders too, so pretty good return on minimal effort there.

I’ve still been doing some non-fiction editing on a limited basis, and worked with a couple authors on their books during the third quarter.

At least one went on to Amazon best-seller status so that’s always exciting to see!

As much as I wanted to, lots of stuff didn’t get done the last 3 months. There were no new Udemy courses, no new Kindle books, no new authority site projects, and no new Amazon private label jackpots — though I did order my first import sample products from Alibaba.

More on that later.

I think there will always be guilt over what doesn’t get done, but I’ll take that opportunity to remind myself about Essentialism :) 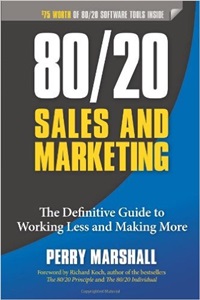 I also checked out Taylor Pearson’s The End of Jobs (scary but important), and Dan Norris’ Content Machine (solid).

And while I rarely read fiction, I did get hooked on The Martian. It even led me to write a nerdy science-inspired blog post. And apparently the book started out as a self-published project — how awesome is that?

Other than that, I’ve been spending some quality time with Rick Steves learning everything I can about Istanbul, Venice, and Florence!

What about you? Any good reads you’d recommend?

I published an article for The Good Men Project on Bryn and I’s #ayearofslowdances. Even managed to sneak in a K-Ci & Jo-Jo reference. 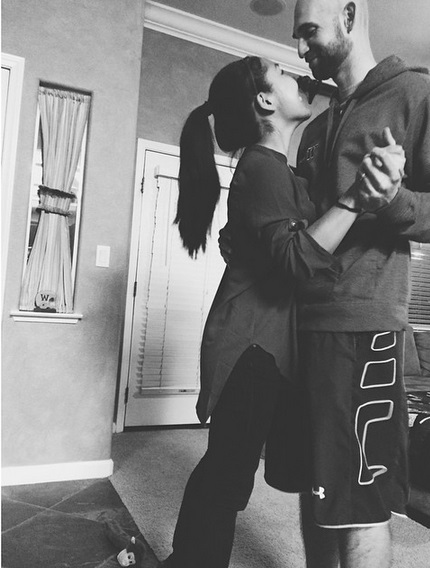 Thanks to Kimanzi for the opportunity!

I got featured on the homepage of Slideshare.

12 Ways to Save on Conferences from Nick Loper

I traveled to Fort Worth for Podcast Movement. It was like a giant reunion with so many of my Internet friends! 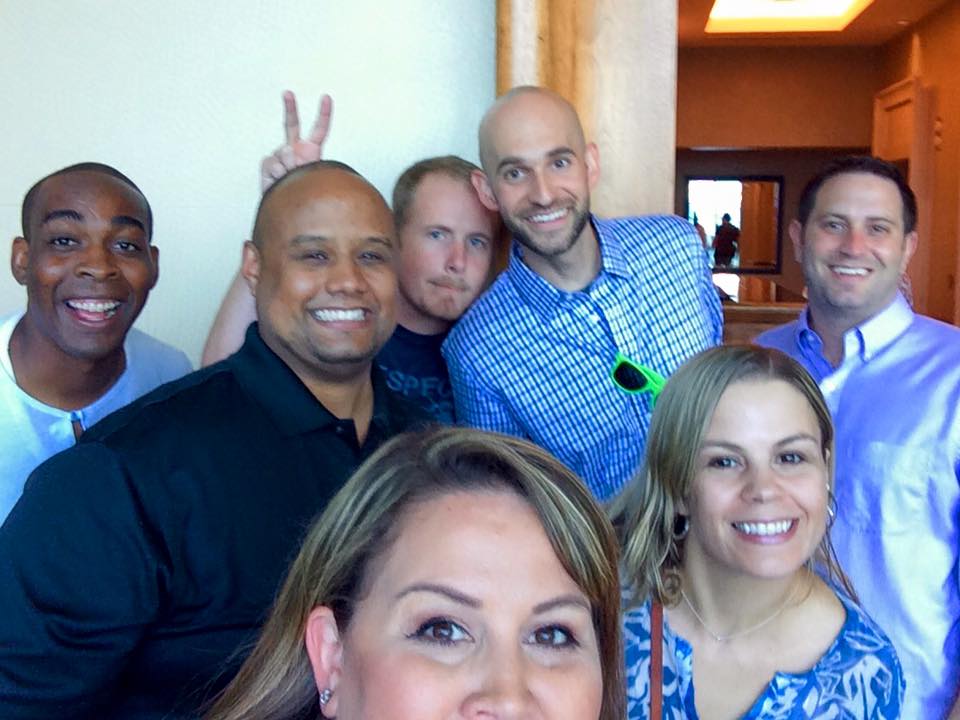 I also hosted a little meetup after the show and — fun story — Kelly, my Lyft driver from the airport, came too! Side Hustlers unite!

Bryn and I visited Seattle and spent some quality time with friends and family. 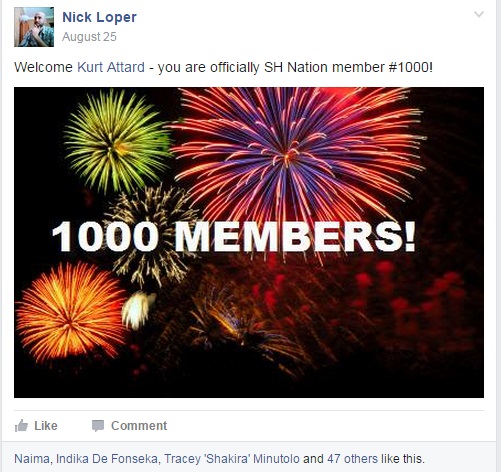 We also went to Chicago to visit friends. And eat. And watch baseball.

I was excited to host a little meetup there as well: 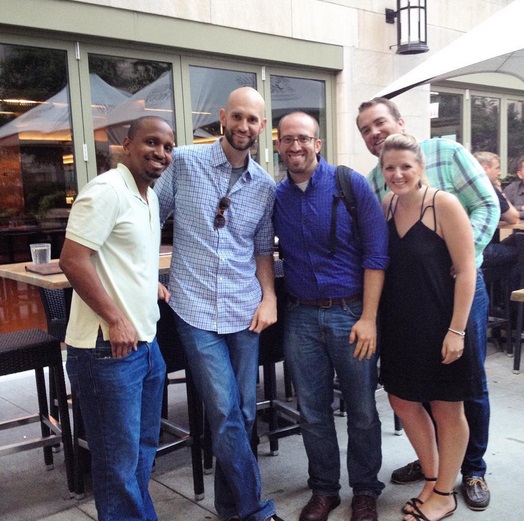 I signed up for Betterment, an automated investment platform (affiliate link).

I attended and spoke at FinCon in Charlotte. This was an awesome event and I met a ton of awesome bloggers for the first time, including past Side Hustle Show guests like J. Money, Ankur Nagpal and Carrie Smith.

This was my first official conference speaking gig. Bryn even got me a fancy-looking suit jacket for my birthday so I could look all professional during my presentation. Both the jacket and the material seemed to go over well :)

I watched this video a half-dozen times:

I did my first live streaming Periscope broadcasts.

And in the end, I had my most profitable quarter since 2012.

And in the original post I described how I was going to define and measure those.

Earning 33 net new subscribers a day, I’m feeling good about this one. Using the metric I set up (at least one message opened in the last month), I’m sitting at a little more than 8200 active subscribers at the moment. If I keep up the current pace, I should be able to reach 10,000 by the end of the year.

This one is harder to measure, but I believe experiments like my personal email outreach to people who fill out my welcome survey and the SH Nation Facebook group (now with over 800 members!) are having a positive impact on this.

I need a better system to track the happy emails and tweets I get, but anecdotally I think I’m making the necessary impact. Let me share a couple stories.

First, someone recognized me “from the Internet” in our little hometown. I was actually at the hardware store doing some Amazon FBA shopping!

Second, Side Hustle Nation was nominated at FinCon for “Best Entrepreneurship Blog.” We didn’t win, but we did get a surprisingly loud applause. Those two seconds of glory felt awesome. (And a well-earned congratulations to Carrie who took home the hardware!)

I said a customer was anyone who spends $50 or more with me, and am right around the 100 unique customer mark so far this year. These are across a broad ranges of hustles, including freelancing clients, affiliate partners, advertisers, coaching clients, and mastermind members.

So in pretty good shape on this one, though for full-disclosure I’m “rounding up” for several people who booked a $49 strategy session at the moment. :)

Call it a win!

I defined a client as someone spending $1000 or more with me. I’m sitting at 9 so far, so I’m on track. These are primarily affiliate partners, but by the end of the year could include long-term coaching clients and other advertising partners.

What’s on the top of your to-do list during Q4?