For the past year and a half, I’ve been doing these quarterly progress reports.

It’s time to evaluate what happened over the last 3 months, to see if you achieved your goals, and to ask if you’re happier or otherwise better off than you were when you started.

Last quarter I wrote about feeling more stressed, anxious, and tired, and wondering if that was just the price of parenthood.

With our little hustler growing every day, things are definitely getting better. I think we’ve already blocked from memory how horrible the first 6 weeks were!

This quarter he started daycare 3-4 days a week, which has helped block off longer hours of hustle time and rebuild a bit of a routine. The good news is I think both Bryn and I are feeling happier about the situation — a stark improvement from the “why did we do this again?” theme from the last update.

I’ve even made a slight tweak to my gratitude journal habit to better be able to “measure” my happiness and gauge the impact of various experiments on it. More on that below.

Still, during Q2 it was a challenge to kick out of “maintenance mode” and start some new projects to drive the business forward.

Why a “progress” report? Because that’s what it’s all about.

As you’ll see, it’s a cumulative, iterative process we can work on week in and week out. In May, this project turned 3 years old, so you’re looking at over 1000 days of effort here.

Side Hustle Nation earned around 3200 visits a day during the second quarter of 2016. That’s 600 more people per day than last quarter, and almost 2.5x what it was during the same time period last year.

Traffic was on a slight upward trend throughout the quarter, but no “hockey-stick” growth here.

The first spike came when some mystery person or group shared my list of side hustle ideas on Facebook. The problem with Facebook analytics is that they’re pretty non-existent so I was unable to tell where the traffic was coming from or even thank whoever shared it.

The two spikes in June were both related to a new piece of pillar content I created, called 200+ Ways to Make Extra Money in Your Spare Time.

This post took 40+ hours to research, write, format, and probably another 15 hours to market, but has performed really well. It’s been viewed more than 20,000 times already in a little over a month!

One interesting note on the traffic chart is it continues to climb despite publishing less content than normal and even after deleting more than half the posts on my site.

In fact, I believe those deletions have led to better Google traffic and search rankings. This is what the traffic looks like just from Google.

A year from now you’ll wish you started today. 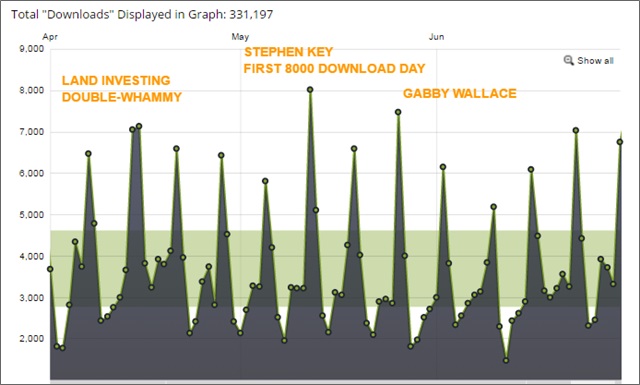 It was a great quarter for The Side Hustle Show, with April, May, and June all over 100,000 downloads.

And perhaps even more exciting, the show has started to directly pay for itself with sponsorships from companies like Teachable, Freshbooks, and DesignCrowd.

This is probably the most important metric of all, and it’s looking pretty solid. I added 70 net new subscribers per day in Q2.

This is up from 49 a day last quarter, and I attribute most of that gain to the overall increase in daily site traffic. An extra 21 subscribers a day from that extra 600 visitors a day is a 3.5% conversion rate.

(The actual subscribe rate is a little higher, but of course I lose people to unsubscribes every day as well.) 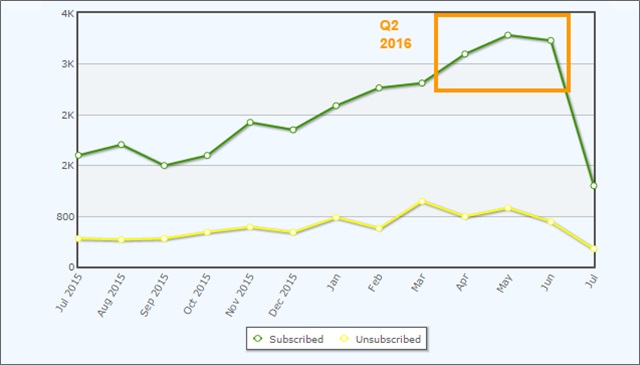 This quarter there weren’t any “abnormal” list growth hacks like my experiment with NoiseTrade. Most of this growth is that compound effect of a growing body of work and consistently creating content upgrades for the podcast.

I’ve lost count, but probably have close to 100 lead magnets on the site now (managed by LeadPages). If you want more people to come to your house, one way to do it is to build more roads to your house.

I actually didn’t set any concrete goals for the quarter or the year. Shame on me!?

Instead, I decided my “theme” for the quarter was going to be a continuation of the first quarter’s theme: to make the most of the content I’d already created.

Now there’s a lot of fun projects that could fall under this theme that didn’t get done, including:

Of those 9 posts, 4 were guest spots, including two of the three above.

I’ve dialed back my writing in response to my member survey results, and don’t think it’s hurt too badly. Instead of being stressed to have something to publish every Monday, I’ll wait until I have something really awesome to share.

In April we wrapped up another session of the Side Hustle Nation Inner Circle Mastermind Group, but I decided to put the next round on hold for now.

Is that really all I shipped? I guess I’ve been working on some behind-the-scenes stuff and doing work on some of my other sites.

The biggest project was compiling that sharing economy post, which was a ton of fun, and is actually forming the foundation of a new book project I’m working on this summer. It’s been a long time since I wrote a proper Kindle book and I’m excited to get back in the game and apply everything I’ve learned in the last couple years.

I attempted to host a paid 1-Day Side Hustle Accelerator event in Chicago following the Podcast Movement conference. I naively thought this would be a slam dunk after my survey responses had 25+ people say they’d attend and that Chicago was their preferred location.

Surely I could get 12 sign-ups, I thought. I didn’t expect it to be a huge money-maker, but figured it would be cool if I could cover my trip to Podcast Movement and see if I liked hosting this type of event.

I reserved a sweet coworking space conference room through ShareDesk and sent out individual invites.

Starting to worry, I sent an email to my whole list.

Then I posted about it on the blog.

Then I filtered to just those subscribers in Illinois and Wisconsin.

Then I talked about it at the end of a podcast episode.

Eventually, I sold 3 tickets. But since I’d promised a room full of entrepreneurs and side hustlers, I wussed out and pulled the plug and refunded the orders.

This was a really eye-opening learning experience about the challenge of hosting live events (and huge props to the people who can pull them off!). There’s a big difference between checking yes on a survey and pulling out your credit card.

I also did a poor job of instilling urgency. After I took the registration page down, a few more people contacted me and asked if it was sold out and if it was still going on. If I were to attempt something like this again, I’d give people a better reason to commit early, and advertise it on the podcast earlier as well.

Also, if I do the survey thing again, I believe there’s a way to use conditional question routing to send people directly to a sales page after they say “yes” to certain questions. That might be fun to test out.

The looming deadline and the unfilled seats probably gave me more stress than they needed to, but I didn’t think it would have been fair to the attendees to show up and only have 3 people.

I still think there’s value in this type of event, and will definitely take these lessons to heart for next time.

So what we did instead was hold a shorter, more informal meetup at a coffeeshop, and had a great turnout and discussion. 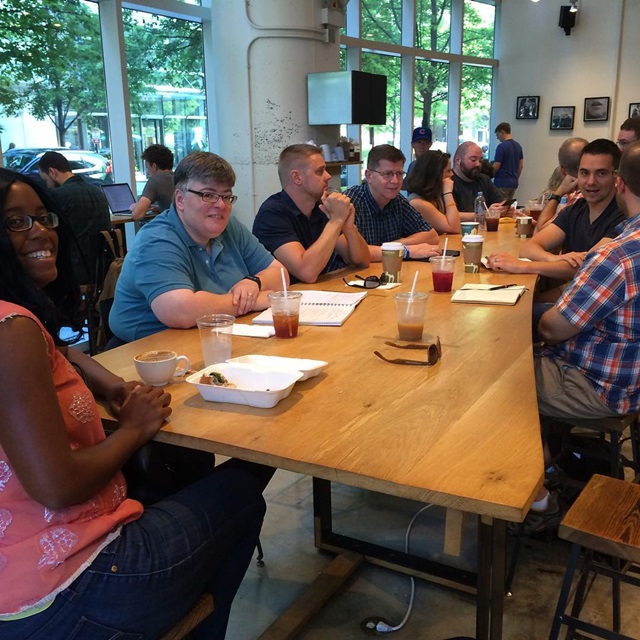 Bryn and I are still adjusting to life as a family of 3, and our little hustler is understandably occupying a lot of our time. But he’s way more fun now than he was at my last update! 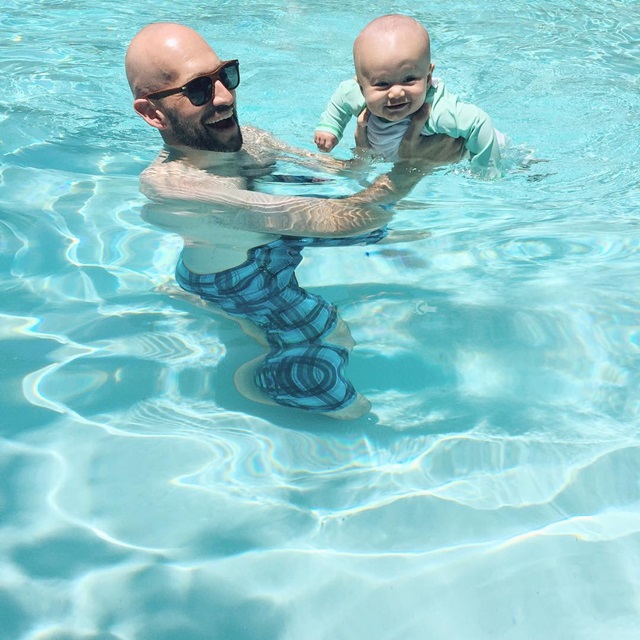 The Side Hustle Show was nominated as a finalist for Best Business Podcast at the Academy of Podcasters Awards. 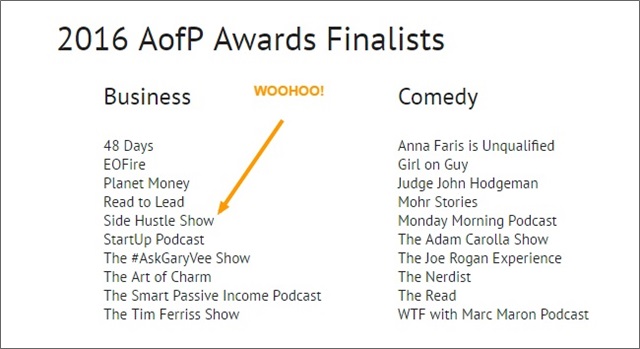 The show ended up losing to Startup, but really honored to be included among that incredible list of nominees!

I changed up my gratitude journal habit, to specifically ask on a scale from 1-10 “how happy are you today?” My theory is this will give me some objective data as a baseline to run experiments against.

We traveled to Seattle, Japan, Dallas, and Seattle again. Yes, with the baby. He was a champ, and we’d like to keep him used to getting on airplanes.

Here’s the little guy drooling his way through Kyoto (and rocking his Seahawks gear). 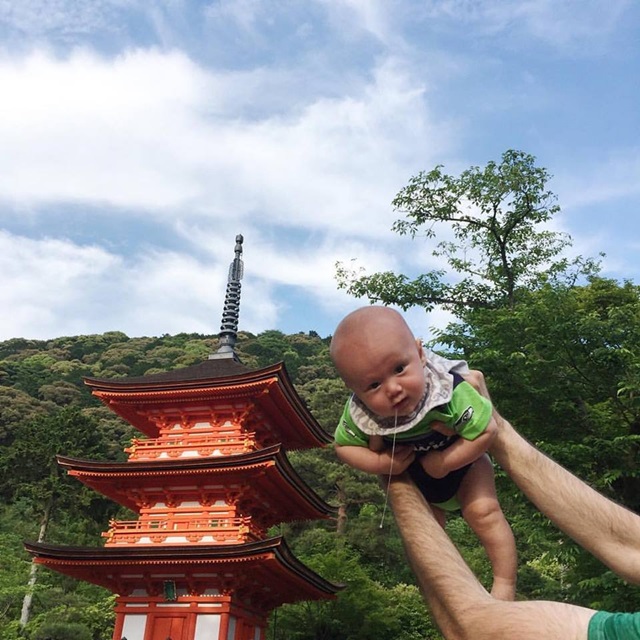 I hosted a meetups in Tokyo and Seattle. Here’s our crew of hustlers at the Shake Shack in Ebisu, Tokyo. And to think we almost left the country without knowing there was a Shake Shack! 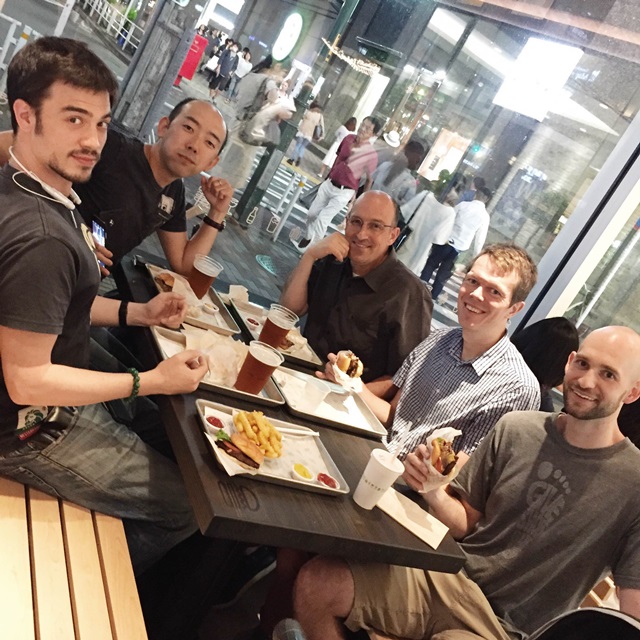 I scored the Southwest Airlines Companion Pass for the rest of this year and all of 2017. 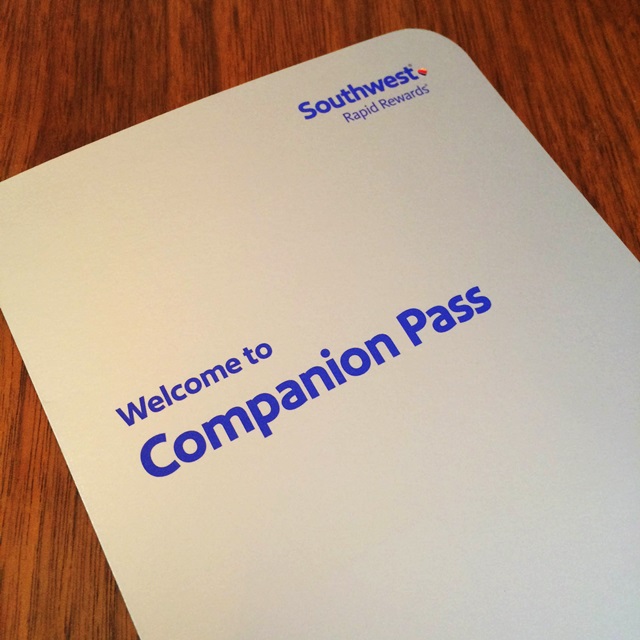 Related: This Spending Habit Has Earned Me Thousands of Dollars in Free Money

I test drove a Tesla with dad. What a cool piece of engineering! But I’ll have to wait a few years for the price to come down. 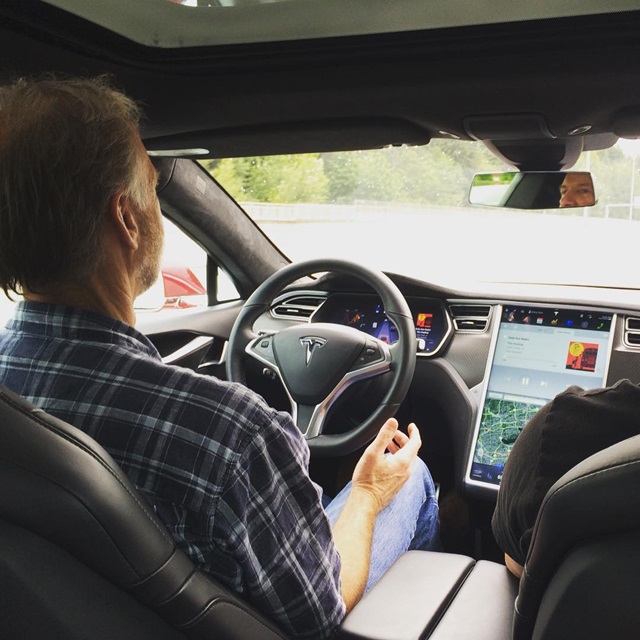 Max started day care and Bryn returned to work, which gave me back my home office during the day.

I had my first Father’s Day.

I was accepted to speak at FinCon in San Diego in September. It’s an awesome event. Join me?