This is my first attempt at an annual review.

It’s time to evaluate what happened this year, to see you achieved your goals, and to ask if you’re happier or otherwise better off than you were a year ago.

Things are moving in the right direction. Even though I had to shut down one of my businesses, and had another costly speculative investment loss (see below), I’m confident I’ll be able to replace those income streams.

In some sense, it’s a game of Side Hustle Whack-a-Mole, where one area falls, another can rise up.

For 2015 and beyond I hope to continue to learn, to build more income streams or grow existing ones, and to help make an impact in our growing Nation of side hustlers.

The SideHustleNation site averaged 236 visits a day in December 2013, compared with 852 visits a day this month. (3.5x growth!) 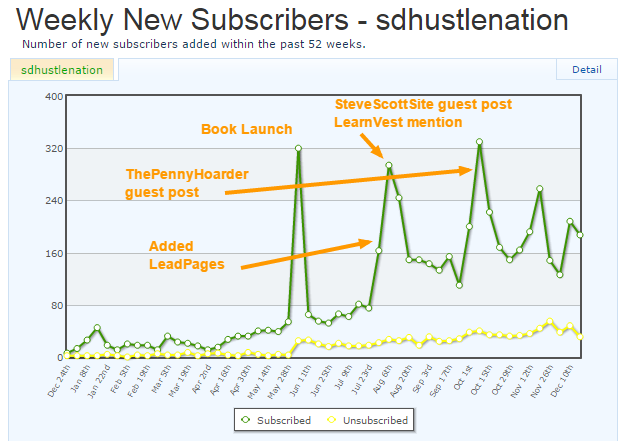 Looks pretty nice, right? Up and to the right in all categories!

At the beginning of the year I set 2 goals:

I knocked the writing goal out of the park. (Maybe it was too low!) It wasn’t a consistent daily habit, but with some batched writing days it averaged out to well above the 125,000 word target.

And how about the business end of SHN?

I did start to see some more revenue from the site and podcast this year. I “monetized” in several ways:

Is it enough to live on? Absolutely not. But it’s a start, and just one of several income streams I’m working on.

So what happened this year?

The Highlight (and Lowlight) Reel

I attended New Media Expo and got a natural high from being with my people. The following week I was back in Vegas for Affiliate Summit.

I recorded a session with Alex Barker, who convinced me I should start a private mastermind group for Side Hustle Nation. Soon after that I formed a small group of beta testers, and a month later I began accepting applications for the first official group.

I was pretty nervous to put a price tag on something like that, but the suggestion has turned out to be one of my most challenging and rewarding projects of the year. During our weekly meetings it’s sometimes tough to see the big picture progress, but over the course of several months it’s obvious and impressive.

If you’re interested in joining the next round, which will start mid-January, I encourage you to check it out and apply.

I analyzed a year’s worth of expenses to determine our “Rat Race Freedom Number.” If you haven’t gone through this exercise, I highly recommend it to find out exactly where your money is going, AND what it’s going to take to break free.

In March, I recorded a podcast with Nick Reese, who convinced me to begin taking cold showers. I started that afternoon expecting to try it for 30 days, but some good things started happening and I haven’t hit the warm water since.

Toward the end of March I woke up one morning to an inbox flooded with Fiverr orders. Turns out they’d put one of my gigs on the homepage, which resulted in a lot of hustle to fill all the orders but ultimately earned more than $900 over 10 crazy days.

In April, I started going to yoga. Not every day or even every week, but every once in a while.

I also bought a site on Empire Flippers. It was all going well until a Google update in September sent the site into search engine oblivion. I was fully aware of the risks, and I’m still high on the idea of alternative investments, but this one stacks up as the year’s most costly loss and probably will earn a post of its own later.

Maybe if I worked on it I could recover the site. But it’s not really an area of expertise and I haven’t made it a priority yet… any SEO recovery experts want to lend a hand?

I spent much of May on a new book project and preparing for the launch. I’d attempted to launch my last book while I was traveling in SE Asia, and it didn’t work so well, so I was determined to do a better job this time around.

The book launch for Work Smarter was a big hit, by far my bestselling Kindle title to date.

In August I made the difficult decision to shut down ShoeSniper, my original side hustle and my longest-running business.

I also made an uncharacteristic last-minute decision to attend Podcast Movement, which was a ton of fun, even if I did get trapped in a mall late at night and had to run through a lightning storm to catch Jaime Tardy’s keynote :)

In September I had my biggest “bucket list” moment of the year (though not a huge fan of that term), which was speaking at our local TEDx event.

The theme of the event was Creativity, and I was charged with speaking on how Millennials are using exercising their creativity to become the most entrepreneurial generation in modern history.

I don’t have the video just yet but will be sure to share it when it’s available.

It was an awesome experience, and I shared the stage with some truly amazing people, but I was such a nervous wreck for the 48 hours leading up to my talk I’m afraid I didn’t enjoy it as much as I should have!

In November I took another crack at launching a Udemy course, this time aimed at aspiring Kindle authors and sharing everything I did before and after to launch Work Smarter with a bang, along with some other cool tactics I learned along the way.

It took a long time to fully outline and create the course and shoot and edit all the videos, but it did well, earning over $1000 during launch week and over $2500 in the first month.

I was also fortunate to spend most of November traveling with Bryn, first to Spain and Portugal, and then to Southern California for Thanksgiving. I didn’t get much work done on the road, but love the experience and adventure of travel.

(As measured by pageviews in Google Analytics.)

Not my best work but apparently a surprising number of people are searching for this.

This was actually a guest post from Travis Scott, and I’m really excited to see it crack the top 10. This post was given new life when a post I did on ThePennyHoarder on the 15 most popular side hustles linked to it.

This was a fun rush, as I was in LA when the deluge hit and found myself knocking out these orders from the hotel room, from Starbucks, and from a random square on the UCLA campus.

This post shares my Rat Race Freedom Number and shows you how and why to find yours.

I was surprised to see this one rank so highly since it’s essentially just an advertisement for my Udemy course, but hey, I’ll take it.

6. Girl Scouts Are Better Hustlers Than Cub Scouts – And What It Means For Your Business

I think this one must have gotten picked up by some proud Girl Scout groups on Facebook because I saw a big spike in FB traffic. And rightly so, because they put the Cub Scouts to shame.

7. Should Side Hustlers Build Active or Passive Income Streams?

This is another one I was surprised with the response. Some of my posts take 8+ hours to write … and this was I one I banged out pretty quickly but generated a lot of comments and social shares.

Happy to see this one resonating with people because this was a great “win” for the year. Switching to Ting is like finding free money :)

Here’s the basic idea with SlideShare. Put together a good-looking presentation and get a few people to share it once it goes live. They’re likely to feature it on the homepage.

10. Killing My Baby: Why I Shut Down My Longest-Running Business

Tough decision to make, and tough to write about, but I’m confident it was the right move going forward.

Measured by downloads. These are heavily skewed toward the second half of the year as the audience has grown.

1. How to Make a Full-Time Living on Craigslist, with Ryan Finlay

3. How Ryan Quit His $50k/year Job to Sell Online Full-Time, with Ryan Grant

4. The Path to Passive Income on Udemy – Even If You’re Not an Expert, with Scott Britton

6. $5k a Month Passive Income Sharing What You Already Know, with Rob Cubbon

7. $33k in 30 Days? Getting Started with Private Labeling and Amazon FBA, with Andy Slamans

8. 20 Hours to a Side Hustle Consulting Business That Gets Paid, with Kai Davis

9. Growing a $4k a Month Business in an Hour a Day, with Kellie Gimenez

10. How to Build and Monetize an Authority Site, with Matt Giovanisci

The podcast is the highlight of my week and I owe it all to the amazing guests who are willing to come on and share their story and provide such awesome value.

I’m working on coming up with some big-picture goals for next year, which I’ll share here on the site.

A few things are certain though, and those are to continue creating the podcast and the blog content, and continuing to build the existing income streams and hopefully add new ones!

What about you? Are you better off today than you were 12 months ago?

I urge you to conduct a similar “annual review,” and if you do, feel free to link it up in the comments below with a couple highlights. Cheers!