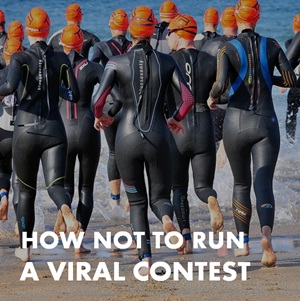 Taylor Pearson got 700 new subscribers giving away his favorite books.

Pretty crazy, right? If I even had a tiny fraction of that success, that would be awesome!

So of course I had to give it a shot.

The basic idea is to hold a drawing for something your target audience would find valuable.

Books, software licenses, and gadgets are all popular choices, but I’d caution against giving away something with TOO broad an appeal — you may end up attracting people who have zero interest in your business.

And I’ve been there as a contest entrant. Free dream vacation? Free iPad? Free ski trip? Sure, I’ll throw my name in the bucket for that stuff. Who was giving it away? No idea.

But where these contests take off and “go viral” is by encouraging participants to share with their networks to earn more entries. For instance, your email might earn you one entry, but for each friend who signs up through your link, you could earn an additional 4 entries.

(Otherwise there would be a dis-incentive to share — why go out of my way to reduce my odds of winning?)

So when 99designs approached me a couple months ago, I thought a contest would be a cool experiment to run. They agreed to give away a free book cover design contest to Side Hustle Nation, and I thought that was a pretty sweet prize.

It’s got a $299 sticker price and has a pretty broad appeal. I mean if 81% of America says they want to write a book someday, that’s a lot of people who’d find value in a free cover design, right?

Plus, we talk about self-publishing quite a bit on the site so it was a fit there as well. It stood to reason that current and aspiring authors might be interested in other side hustle-related content as well.

It was on me to figure out how to run the contest and determine the winner. I was originally just going to ask people to leave a comment on this podcast episode, but realized that it would be much smarter to require an email opt-in to enter. And hopefully build some virality into the contest as well.

Giving something away to your listeners and subscribers is nice, but what I really wanted to do was use this opportunity to get exposure to NEW people.

There’s a whole host of software solutions to help you do this, including KingSumo Giveaways, Contest Domination, and Heyo.

I ended up using a free plugin I found called Contest Hopper. It had all the functionality I needed — and the price was right. 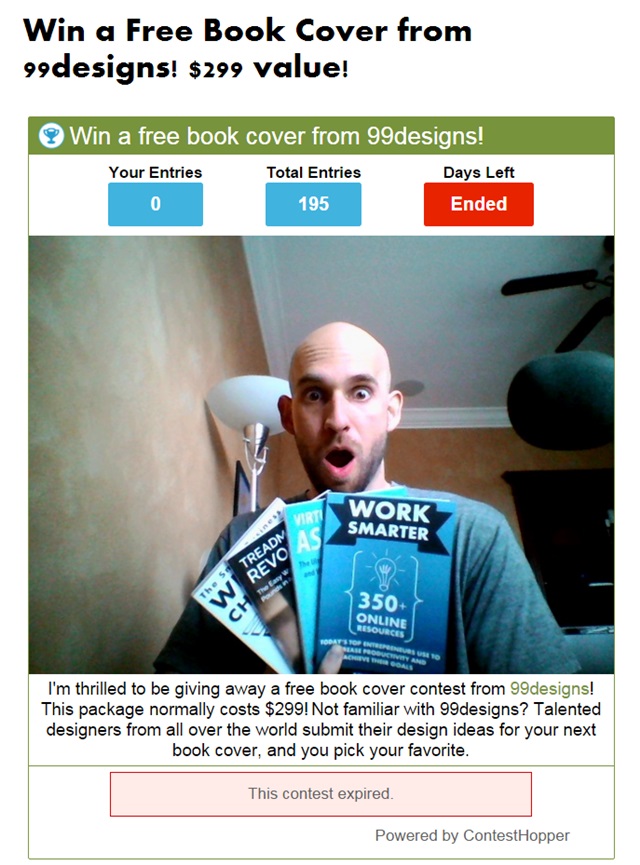 To encourage sharing, I set it up so that everyone who joined through your referral link earned you an extra 4 entries.

As you can see from the image above, the contest generated nearly 200 entries. Not bad, right?

But of those entries, only 31 were new to my email list. Ouch!

And of those, only 23 are still subscribed today.

So while my NoiseTrade experiment was a big win, this one not so much. Gotta show the good with the bad, right?

In hindsight, this is where I did a poor job.

I plugged the contest on the podcast and in my email newsletter, but didn’t give it its own “solo message.”

I didn’t do much manual outreach, share in relevant Facebook groups, or submit to giveaway sites like my buddy Dave from Ninja outreach suggested in this post. (His contest also had lackluster results, though he did better than me!)

Or maybe the prize just wasn’t as compelling as I thought. It’s kind of intangible and unless you have an immediate need, cover design may not be a top priority.

Have you ever run a viral contest to grow your email list?

What did you give away? What kind of results did you see?

9 thoughts on “I Ran a Viral Contest. The Results? Not So Viral”